Login to add items to your list, keep track of your progress, and rate series!
Description
Kamijou is the envy of all of his coworkers. At the office, he can solve any problem. Outside, he is chased by every girl under the sun. Kamijou, however, only has eyes for one girl: Xianglan, a Chinese immigrant who works as a waitress in the local Chinese restaurant. She can't see him as anything other than a customer, and her lack of fluency in Japanese prevents her from understanding him. Will Kamijou manage to woo Xianglan, or is he forever fated to fail? 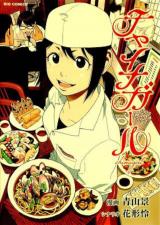 Note: You must be logged in to update information on this page.
Forum Posts Click to view the forum
Mangaka Kei Aoyama Commits Suicide
over 10 years ago

Don't bother with it
by sweetdevil
July 5th, 2021, 10:05am
Rating: 3.0  / 10.0
Even without knowing that the ending was rushed, the whole premise is poorly thought out and executed. This guy, who apparently has no trouble finding women, has rejected all of them because he wants absolute perfection in a woman. And decides he's found it...in a young Chinese cook/waitress whom he hasn't even spoken to or whose name he doesn't even know.

It's love at first sight for him, and it never gets any deeper than that. He acts like a creep — trying to talk to her repeatedly while she's working, not taking "no" for an answer, pushing to call her by her first name after she clarifies that she finds it very rude, even following the poor girl around outside of work — and we're somehow supposed to see it as romantic and cheer for the poor dude who's been told "no" by a woman for the first time in his life. Boo hoo.

The art is also pretty bad, especially the full body shots in the last chapter where characters look like they've been stitched back together after having half their calves and half their hips removed. The mangaka also has a tendency to draw women cross-eyed when facing forward, for some reason, which makes them look goofy despite the serious context.

All in all, avoid. There's nothing to gain from reading this except frustration.
Was this comment useful?  Yes

Spoiler (mouse over to view)
The girl disappears and comes back right at the end. I mean its great when it hints they will be together, but when I'm on this journey about them falling for each other, I want the ending to better reflect that.

It seems to me when an author uses that type of ending, it means they couldn't come up with anything better, but sometimes a more cliched ending works.
Was this comment useful?  Yes

Could've been a lot better
by ejkyaje
July 21st, 2014, 5:15pm
Rating: 5.0  / 10.0
The art is really good, though the expressions are pretty goofy sometimes (not necessarily a bad thing). Some of the comedy is stupid and even gross (things like snot, etc.). The ending seemed random; it was like there were pages missing or something. I'll give it a 5.
Was this comment useful?  Yes

Love it
by x3_tarepanda
October 24th, 2011, 12:27pm
Rating: N/A
For this manga, I just had to create an account to say how great it is. I'm Chinese and found the story to be hilarious. Sure the 12:30 thing wasn't effective, but the plot in how the main character gets getting screwed over I was laughing so hard because I just felt so embarrassed for him. Overall the story is very heartwarming with the whole one true love concept, and I just really liked how the author uses so many analogies to show the main character's struggles. If you want a good laugh, I suggest this manga for a read.
Was this comment useful?  Yes

just a FYI about shi er dian ban
by pulupulu
December 4th, 2010, 10:24pm
Rating: N/A
Being able to read chinese and have many chinese contact (taiwan, china, hong kong, singapore etc), I can confirm that "Shi Er Dian Ban" are always taken literal as in "12:30" and never about anything embarrassing.

Shi Er Dian Ban is purely the story writter's naive/ignorance. (along with many other bizarreness that readers may find in this story about chinese)

Though that being say, I still think the story is still a pretty cute one. If you can forgive that part of the author, one should be able to read this short 1 book manga and enjoy it.

If one really want to read something that's between japanese and chinese relationship, I recommend http://blog.livedoor.jp/keumaya-china/ which accurately portrait many of its story.
Was this comment useful?  Yes

Pah
by Name-Undecided
September 27th, 2010, 1:21pm
Rating: N/A
Not only is the story crap, but something about Aoyama Kei's art always makes her characters look completely retarded. I can't think of a single point of merit for this manga. Uh...umm....ah...nope, I've got nothing.
Was this comment useful?  Yes

Re: Shi Er Dian Ban
by scrubb
September 12th, 2010, 8:36pm
Rating: N/A
There seems to be a lot of discontent over the translation of this phrase in chapter 02. The translation is correct, based on what's in the RAW. If you don't believe me, have a look for yourself:

My opinion is that the phrase "Shi Er Dian Ban" (12:30) is a euphemism in China/HK/Taiwan (and not necessarily repeated by Chinese outside of there) because
Spoiler (highlight to view)
the hands on a clock at 12:30 form a straight vertical line, like an erect penis
Obviously, Xianglan wouldn't have gotten embarrassed if she didn't get the implication of the phrase. If you still think this is totally wrong, take it up with the original author. I'm just working with what I have. Maybe someone who actually lives in Cn/HK/Tw can comment on it.

Oh, and if you have an issue with her broken English, that's because her Japanese is broken as well. It was a stylistic decision on my part, and I'm doing the best I can to be consistent with the Japanese text without overdoing it. If you don't like it, I invite you to not read the manga.
Was this comment useful?  Yes

Shi Er Dian Ban
by m0u5e
September 6th, 2010, 6:53am
Rating: 4.0  / 10.0
Wrong. Unless "12:30" (chapter two) is now a new metaphor/slang for
Spoiler (highlight to view)
"My male reproductive organ is engorged with blood"
this this is quite possibly the most inaccurate and insulting manga about immigrants I have ever read.

AOYAMA Kei's an excellent artist, but honestly the story is crap. Don't waste your time.