Login to add items to your list, keep track of your progress, and rate series!
Description
Yamamuro Yuuki is a talented star who has caught the eyes of many people. He's been toying with a young and seemingly innocent actor named Sawaki Mitsuru, who stars opposite him in a drama. To make matters worse, Ootaki, the producer of "Casual Lover", is also after Sawaki. The curtains have lifted on the game of love between these proud men!

Latest Release(s)
v.1 c.1-6(end) by Dangerous Pleasure over 13 years ago
Search for all releases of this series 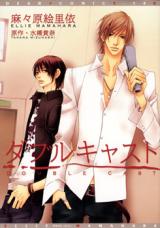 Meh
by mtmt1311
May 18th, 2013, 2:08am
Rating: 3.0  / 10.0
Art is great but nothing else.
I agree with everything evilcleo said (previous post) I still dont think the main character fits to be an actor. Hes just a wimpy pushover. He is so tiring that this manga is like a lecture just went on and on. Finally after all that randomness, the couples just "kinda" get together then BAM, the end. I was glad this is over.
Was this comment useful?  Yes

Skip it (minor spoilers)
by evilcleo
November 22nd, 2012, 8:36am
Rating: N/A
I didn't really care for it. The summary made it sound good but it wasn't. There isn't really a love triangle. The director is a wallflower who doesn't try and Yuuki wasn't even interested in the other guy. Even when they got together in the end, you couldn't tell he liked his lover. He was more like "eh, whatever. I'll just go with it."

Not that Yuuki was a good character anyway. He is a whiny, arrogant actor who waits for things to fall into his lap without any effort on his part, being very picky in his choices of jobs. He had one big drama and suddenly thinks he's a hotshot who is too good for small jobs even though he is lucky to even be getting any offers. I thought the work competition he had with the new actor would break him out of that but it didn't.

And, for some reason, he couldn't get that Sawaki liked him. They went out to dinner, had a bunch of heavy make out sessions (one of which could have easily led into the bedroom), Sawaki even told him he liked him, and yet someone had to tell him Sawaki had a crush on him for him to get it? I get he thought it might have been a game, like the one he started, but there was enough obvious signs that it shouldn't have been that big of a surprise.
Was this comment useful?  Yes

gotta read it a second time
by Dagorkitty
July 18th, 2011, 9:35pm
Rating: 8.0  / 10.0
i was really confused at the begging and then through the rest of the story, but around the middle i was able to see an undertone to the plot. So, i'm gonna read again, because i truly see potencial in this, if i manage to understand it. I think the beauty in this manga is rather subtle, so it's dificult to get at once. For now i'll give it an 8 and read it again.
Was this comment useful?  Yes

Well...
by Ishikawa-San
July 6th, 2011, 6:07pm
Rating: 1.0  / 10.0
When I saw the cover I bought it directly but I was kinda disappointed...
first of... the story itself was no good, and I got confusing about who says what...
second of... the background art was good but the characters itself was bad... the mouth, the hands, the shoulders and then the neck was too huge, the only thing I liked about the characters look, was their hair and eyes....

well... I hope everyone else enjoy the story and the art...
Was this comment useful?  Yes

I love it!
by iPocky♥
June 25th, 2011, 8:14pm
Rating: 9.0  / 10.0
I recently bought this manga and I just finished reading it, and I gotta say I LOVE IT! Yes, it was a bit confusing. The whole flower thing was definitely not something you'll get right off the bat, you have to think about it a bit, and I find it really interesting.

I also love the characters. I love the tension between them and how they slowly find out about their real feelings for each other with the help of other characters. Overall, the plot is quite interesting and I really enjoyed reading it. So yeah, 9 out of 10 for this one!

Oh! One more thing! I find the description quite off. Otaki wasn't really after Sawaki. Well not in the "I love him and I want him to be my lover" kind of way. I don't really see the love triangle in the story. Otaki just occasionally act as Yuki's "lover" but he does that for a very specific reason (I'm not gonna spoil it lol) and not because of love.

Nice!
by Sakura_Hikizaki
January 2nd, 2010, 7:30am
Rating: 9.0  / 10.0
I found the plot enjoyable, but at the same time it was a little confusing. I had to re-read it to understand it better. The art was lovely. This was the first work of her's I read, and I am not disappointed. As I will keep an eye out for future works. Overall it was good read, and I would recamend it
Was this comment useful?  Yes

Uninspiring
by ZeroNine
June 29th, 2008, 10:17pm
Rating: 5.0  / 10.0
Nice art work, but the story itself didn't hold my interest well and the build up was almost non-existent. Overall I found the story nothing to write home about.

Double Cast
by faerygoddyss
June 29th, 2008, 5:38pm
Rating: 6.0  / 10.0
I love Ellie Mamahara's stories! I love the art, and the way all her characters have such long limbs and bubble eyes. I also love her stories and always wish she'd do some yaoi rather with sticking with shounen ai and bordering hetro with a homo undertone stories.

But! This one, I did not like. The story seemed a bit dry and lacked the eye catching plot that she usually has. I was disappointed.

But she's still my favorite mangaka.

She gets a 6 for that, and her usualy amazing artwork.