Login to add items to your list, keep track of your progress, and rate series!
Description
1-4) Houkago no Love Call
A high school teacher, Ueda Wataru, was rejected by a person he loved back when he was a high school student and has been timid in love ever since. However, he's now fallen in love with his student's father, Ippongi Kazushi, a Yakuza. Although Ueda knows that he shouldn't be, he's fascinated with the good looking Ippongi's sweet words...

5) A Certain Ordinary Day
High school student Akira is petite and cute and always bullied, luckily his childhood friend Ryuusei is always around to fight for him. Except Ryuusei is a terrible fighter who always loses! Akira loves the ... More...
1-4) Houkago no Love Call
A high school teacher, Ueda Wataru, was rejected by a person he loved back when he was a high school student and has been timid in love ever since. However, he's now fallen in love with his student's father, Ippongi Kazushi, a Yakuza. Although Ueda knows that he shouldn't be, he's fascinated with the good looking Ippongi's sweet words...

5) A Certain Ordinary Day
High school student Akira is petite and cute and always bullied, luckily his childhood friend Ryuusei is always around to fight for him. Except Ryuusei is a terrible fighter who always loses! Akira loves the fact that Ryuusei always comes to his rescue, so he hides the fact that his delicate body hides super human strength!

6) Sweet Honey and Punishment
Since Childhood, Nobuhira Tatsuyoshi follow Toshitaka like a persistent dog, even though Toshitaka act coldly and even cruelly toward him.

7) Shoshite koko niwa Fuku ga Kuru (And Then Happiness Will Come to This Place)
Two friends in a soccer club share a kiss because of a dare and true feeling of first love are blooming. Less... 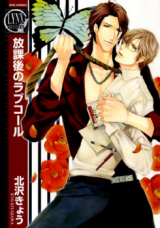 The main couple is having dinner together, right? The uke asks the seme a simple question about his feelings because he was feeling insecure. Out of nowhere, for no reason, the seme goes ballistic. He rapes the uke until he bleeds, then pulls a knife and threatens to cut him into pieces for dinner. Then he suddenly switches back to normal like nothing happened, kisses the uke softly, and the Uke is like, "it's my fault for hurting his feelings. I'll believe in his kindness." End scene.

And my eyes rolled so hard to the back of my head that I went temporarily blind. Ok, that last part didn't happen, but I was still pretty freaking stunned by the whole scene. Such ridiculous behavior by both parties. The oblivious mangaka even drew pretty little flowers at the end of the image to highlight what a sweet moment it was. Meanwhile, I'm sitting here screaming, "run, b*tch, run! That guy's a complete psycho. Who cared about his pretty face!"

Chapter 6: This time, the psycho character is also a crazy stalker that responds to rejection with violence and intimidation.

The other stories are just meh.

So yeah, that's the kind of bullshit you can expect from this manga. It is what it is. It's senseless, violent smut with a half-assed story thrown in there. Don't expect more than that.

Okay
by Himeowchama
April 19th, 2017, 7:57pm
Rating: 7.0  / 10.0
At first it was cute, until that yakuza ended up punishing the sensei. I swear the yakuza didn't understand what the sensei meant. The sensei doubted his own capabilities, not the yakuza's feelings. He was insecure, and a tight hug with the words "I love you" would've sufficed. But nooo, he scared the sensei instead. He didn't even prepare the sensei, and I swear it's painful. And I hated their relationship since then.

THE OTHER ONESHOTS WERE HELLA GOOD!!!

Sometimes Good, Sometimes not as Good
by FeyPhantom
January 31st, 2015, 9:25pm
Rating: 7.0  / 10.0
Houkage no Love Call: Overall it was okay - about what I expected. It was average and cliche but enjoyable enough to pass the time with pretty enough art. At least, up until the 3rd chapter when one scene kind of ruined the entire thing for me.
Spoiler (mouse over to view)
Ueda, who's doubtful of his good points as is common with ukes in BL, is raped by Kazushi and then threatened at knife point that Kazushi will cut off pieces of him. But of course, if Ueda doesn't doubt him ever and wants to be treated nicely, then Kazushi will treat him that way. ... Umm, what? And Ueda's the one to apologize? Yup, surely Kazushi didn't do anything wrong there and Ueda's insecurity hurt Kazushi so badly his actions were all justified./sarcasm But seriously, want to know the easiest way to ruin trust in a relationship? Rape your partner. The threats with the knife were just an added bonus.
So yeah, that scene pretty much ruined the story for me.

A Certain Ordinary Day: It was cute. Really, there's not much else to say about it. It's not really a story to draw me into reading a volume, just an extra to pass the time.

Sweet Honey and Punishment: Compared to the previous story, this one's quite dark and twisted. There seems to be two different interpretations to this one going around -
Spoiler (mouse over to view)
one where Nobuhira is yandere and one where he's after revenge.
Most people who seem to like this one believe the first interpretation. I saw it as the second interpretation and ultimately didn't like it as much.
Spoiler (mouse over to view)
It seems to me that he was exceedingly loyal in order to punish Toshitaka. Kind of like acting as the loyal follower Toshitaka seemed to want when he ordered him to get the paper plane but doing so to an annoying level and finally showing Toshitaka that the only way to get away from him was Toshitaka's death. I didn't feel any form of love from him. He also really didn't seem to mind killing Toshitaka, which to me also shows that there's no love between them. It actually seemed like he knew someday Toshitaka would be driven to death in order to get away from him. All in all, this seemed like a two-way abusive relationship and it's no surprise to me that the mangaka's storyboards for a sequel were declined due to their relationship not being able to progress. She even said that she believed their relationship wouldn't change and I believe that since it's not one built out of love and respect but out of hate and contempt.
Having said all that, this seems to be a story that you have to decide for yourself on whether you like it or not and that's thanks to the drastically different ways of seeing the relationship between these two boys. Because of that, I think the weakest part of this story is the fact that the mangaka didn't make it clear enough what Nobuhira's character was really like.

Soshite Koko Niwa Fuku ga Kuru: Kind of like the second story in that it was cute. I found the sudden jump to sex very... yaoi-like, but not in necessarily a good way xD;; I liked the entire story except for the smut only because it felt too out of place. Overall, a sweet story about young love and bad(?) luck.

Basically, the whole volume is one I could've avoided but it was okay for an average read. The art is what drew me to it and was eye candy for most of it, but I'm not sure it was good enough to warrant the time I spent reading this.
Was this comment useful?  Yes

Chapter 6
by mashimaro12345
September 6th, 2014, 10:02am
Rating: N/A
Holy crap Chapter 6 outshines all other stories here!!!!
The plot is so sickeningly good, i love how the seme has this two personalities and how he's the one actually controlling the uke. However, just when I expected it to progress to something more, it ended just like that?! Didn't bother with chapter 7 since I was so hung up on the previous chapter.
The main story, meanwhile, is good, except that I really hated the rape scene. It's way beyond the limit. Instead of getting angry, the uke apologised to the seme for not having trusted him enough (WTF man your intuition was spot on you should not have trusted him lol). Moreover, the story could have progressed to the point where the yakuza's son develops an interest in his sensei and having a threesome in the story. Too bad.
Was this comment useful?  Yes

Decent, depending on what you expect
by MisanthropicEggplant
March 26th, 2014, 5:08pm
Rating: N/A
Classic yaoi formula, creepily possessive seme and doormat uke, but with a slight twist; the author actually calls out his abusive actions and tendencies, not reprimanding them, but presenting them as yandere. Nothing new here, like in any other yaoi, everything with a pulse finds the protagonist attractive at some point and the seme slut shames the uke at 50mph. As a smut manga, it's pretty okay. The art is quite pretty though, if you ignore the occasional cases of yaoi hands.
Was this comment useful?  Yes

Chapter 6 was so sick and twisted. I loved it! I didn't expect something so darkly psychological in such an anthology.

delicious
by whitespade
October 3rd, 2012, 8:26am
Rating: 9.3  / 10.0
chapter 6 is the best. it have the type of character that i like the most, the yandere type - obsessive, possessive, willing to go great lengths for the beloved, and have the best expression in their yan-yan mode. the story is just perfect, suitable length and enough glimpse of their past to understand the characters.
the first story is also great, i like the cruelty of the seme, as befitting of a yakuza. i think it only right for a yakuza to be ruthless and possessive.
the last story is good, with the first-love type of story, very innocent and cute. the characters are quite original in BL world, or at least I seldom find people that is as 'normal' as them, just a couple of teenagers discovering their sexuality.
the second story is very very very weak comparing to the others, but i guess it rightly is just average like any other BL.
all in all, a very good volume.
Was this comment useful?  Yes

Love it!
by Kinky-Chan
June 29th, 2012, 11:19pm
Rating: 10.0  / 10.0
Another awesome work by Kitazawa Kyou!!!! I love the first story annnnnd the 2nd last story was pretty scary. I mean, scary as in...like those psycho scariness. The last story is a sweet one, so overall, this manga is a nice read! Not to mention the lovely bishies!
Was this comment useful?  Yes