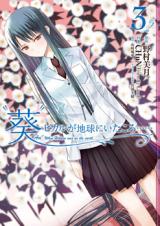 Continues In the LN, However . . .
by re: netero
May 15th, 2016, 12:27pm
Rating: 7.9  / 10.0
While the story doesn't quite end in the manga, for me it was still very enjoyable and I did for the most part like how the manga ended. The main thing I enjoyed in this manga was the "true" friendship between the two lead male characters. I wished that the female characters in the story could have had more development though perhaps they did in the light novel . . . I'm not sure and I probably won't read the light novel. As an adaptation this manga should indeed stay true to its source as much as possible, however, as short as it is the story could have been altered slightly and it would leave a still-open yet more fulfilling ending that didn't force you to read the source material. Overall I enjoyed it for the strong bond between the two main leads and for some of the female character development as well (though that took a back seat as far as the manga adaptation is concerned). I would have given it a higher rating had the story been altered from its source material to accommodate for its lack of a resolution to a certain plot point . . . for me though, I could still enjoy the manga despite that although admittedly it does leave me feeling a bit curious.

It's good but....
by Kazekid
July 26th, 2015, 10:15pm
Rating: 10.0  / 10.0
sadly, this is one of those "give you a little bite of the story so you will want to buy and read the light novel" mangas. So expect a wishy washy open ending that will leave you curious as to what will actually happen in the light novel.
Was this comment useful?  Yes