Login to add items to your list, keep track of your progress, and rate series!
Description
A very short (2 page) oneshot focusing on the idea of "eros" (passion, longing, love), and the narrator's own preferred definition. 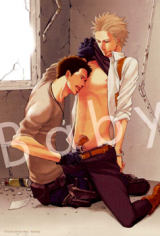 
Category Recommendations
Marcel
Red Lambda Thesis (Novel)
My End of the World Legion of Women
The Code to the Evolutionary Spiral
Magical Shooting: Sniper of Steel

Not Worth Anything Less Than a Ten
by FeyFujoshi
May 28th, 2017, 1:05pm
Rating: 10.0  / 10.0
Sure, it's two pages long, but that's exactly why it is awesome. Quite honestly, this is one of the best oneshots which I have ever read. And it also happens to be one of the first shots that, actually in fact manga which I picked up when I entered the yaoi world. And no matter how many times I come back to this, each time I really do leave with a much more nuanced interpretation.
Also, Eros as evident by the name means erotic/sexual love. And the very fact that YONEDA Kou, despite this title only sets up the sexual tension in the air, is worthy of praise. The execution is flawless. Truly, a stream of consciousness.
Was this comment useful?  Yes

Since I had already read the description and the comments before I actually read the "series", I can say I totally saw that coming. Some people might feel puzzled and don't really know where to hang onto, I totally understand that. I mean, it's only 2-page long, too short of an amount to make much of an impression on readers.
But to me, I don't consider this a "story" like some people above did. There was NO story at all. There wasn't a plot, characters or incidents to follow. THOSE are what really makes up a "story". Now this is more like a subjective outlook on the definition of "eros", a type of "bible" that the author tends to stick to (if you know what I mean). Like a self-claim moral, I guess. And thus it's just wrong to judge it when you regard it as a "story". Just wrong and unreasonable.

Everyone's got different notions of concepts, and in this case "eros". Personally, to me Yoneda Kou-sensei's idea is quite interesting and worth taking a thought of. It somehow helps me understand, even if just a bit more, about her stories, old and new, and the execution on the "eros" she has made. If you've enjoyed sensei's works and have been following her for a while, I think it's advisable to give this a try and have a deeper and more proper look on her productions.

PS (5 months later): Btw did anyone know "eros" actually means "love" in Greek?? I don't know about you but I definitely didn't. Which is all the more intriguing to me. It all makes sense now!! After 5 long months when I first read the series!! I feel like I could finally understand a little more of what Yoneda Kou-sensei was trying to convey now.

brilliant!
by alice00
June 2nd, 2012, 5:53am
Rating: 10.0  / 10.0
this is my first time to critique here and I can't help but defend this manga
for those who didn't get it at all.. well, here's my POV
Spoiler (mouse over to view)
the blonde guy is the one narrating and he has 3 different version of eros
the first scene is the cheesy woohoo sex,
the second scene is kind of like..enemy? one night stand? yea, something like that
the third scene is I think the reality, which the blonde guy has an unrequited love? which is why he said that you can't really put it into words but it's better if you experienced and gain it.

It's short but this 2 pages manga made me release my imagination xD
Was this comment useful?  Yes

:))
by Jalapeno-san
November 17th, 2011, 5:51am
Rating: N/A
I wonder why it was so short... I would have been an awesome manga with just 1-2 chapters more :/
Anyway I don't get ppl who say this was no good because it made no sense and it was so short. wrong,
it was clearly a good story but it lacked pages that "fill" the whole story.
Was this comment useful?  Yes

Rofl
by Sasageru
June 24th, 2011, 2:23am
Rating: N/A
Shortest one shot in history XD if i remember rightly when i read this there are 10 pages, only two of which was the manga, so i was totally confused, but then i read the description for the story and things fell into place.

This has very nice art and a good theme, but as you can guess, its devoid of anything else ^^; it does its purpose though.
Was this comment useful?  Yes

Brilliant
by FeyPhantom
February 25th, 2011, 3:49am
Rating: 10.0  / 10.0
This simple (yet complex in its own way) oneshot is what introduced me to Yoneda Kou's brilliance. I don't know any other mangaka who could twist such an intricate (yet delicately simple) story into two pages. It shows two different versions of eros the main character imagines before showing his true object of desire (in front of him in the infirmary) and leaves it simply at that leaving the audience with two completely different stories to ponder on (the daydream is intricate enough to count as its own story) and wonder what could be the story between the two gangsters(?) and what will (or won't?) happen between the two boys conscious of each other in the infirmary.

This is without a doubt my favourite short manga under 10 pages long.

hahahah!!!!
by donli1
June 6th, 2010, 11:58am
Rating: N/A
i know that some people think that this is really weird and sophisticating manga, but i actually find it hilarious and intriguing .. another job well done for yoneda kou!!!

if anyone wants to know, this is my own interpretations of the story (the reason why i think it's so cute). there are two though:

well, these are my interpretations of the story...

) but the story is more like a mere explanation of the opinons of the author of how she truly feels about the topic.

You ever see a nice painting you don't quite get, but that seems oddly beautiful the more you glance at it? Take that approach. It leaves a lot to the imagination, but that's the wonder in it.

Maybe it would be better as a DJ
by daniyagami
August 27th, 2009, 7:05am
Rating: 8.0  / 10.0
If this was another KHR doujinshi I would have understood better because this is the kind of oneshot that I expect that sensei Kou writes to Yamamoto and Hibari, her fav pairing. So I just read as if it was a KHR DJ, it made more sense to me than two new characters without any kind of background. Even so, this oneshot have the peculiar and special poetry that we always can find in sensei Kou works and I definitely enjoyed this.
Was this comment useful?  Yes