Login to add items to your list, keep track of your progress, and rate series!
Description
Fuyuki is an anti-terrorism specialist for a security company. His current assignment is as a bodyguard for elite company president Kagami. This is no ordinary assignment, however. Kagami’s not looking for protection from Fuyuki, he’s looking for love, and his constant expressions of affection have Kagami’s nerves stretched to the breaking point. 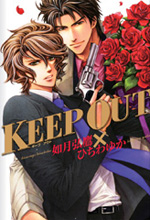 One of this author's better works
by OmNom
December 30th, 2017, 10:40am
Rating: N/A
The beginning of this manga didn't completely make me very excited, especially when it was crawling with cliches all over, but I'm glad the characters got a decent amount of development which made me more interested in them by the end. The second couple is really scrumptious too, I gotta say, so that was a nice bonus. Wish there was more smut, but I'll take what I can get.
Was this comment useful?  Yes

aaaaw a touching one~
by Maria-Ayako
September 4th, 2015, 7:47am
Rating: 9.0  / 10.0
I didnt expect much,but was nicely surprised to see that it was worth my time. Lovely art, serious story, cute couple, nice side characters, the dog was adorable too, funny moments, but sad and painful parts too, much love and a bit of H. America as a background wasnt so bad and the young master x bodyguard theme was interesting. And i liked the art too. Lets not forget the side couple, which was cool and sexy

A serious but still funny and cute yaoi manga. I recommend it to all yaoi fans ^_^

It gets better...
by streetwalker
October 23rd, 2011, 6:03pm
Rating: 9.6  / 10.0
To be honest, if it weren't for the fantastic art, I probably wouldn't even have read beyond the first chapter let alone finish this. But I'm glad I did. I'm not really sure what was off about it in the beginning. The characters just don't seem to have much chemistry or feeling (except of the negative sort) between them. Fuyuki really seems to rather hate Kagami and the way he's acting I can't really see what Kagami's love would be based on. Also nothing much happens when it comes to plot. But when the relationship slowly begins to develop into something deeper it gets better fast. Fuyuki gains a little softness and Kagami turns out to be a reliable emotional support kind of guy, which is nice. So I think there's definitely some good character growth there. Maybe the pacing was the issue. The beginning was just plain boring to me. Still, since it managed to redeem itself, I'm rating high...

Ha! Funny and entertaining!
by sofistree
August 30th, 2011, 6:19pm
Rating: 8.5  / 10.0
The main couple is funny! The seme is after the uke like some kind of cute wacko, and the uke is horrified most of the time. Also, I love that the uke is employed as the bodyguard. It's a nice twist - I hate it when the semes are supposed to be the only capable ones. Ugh. Speaking of which - Shen Yi was so badass! I love ukes like him.

Plus, the uke's face when he was ticked off were pretty hilarious... and frequent.

It's nothing new, but it's cute. Don't take it too seriously. It's a comedy.

Oh! And by the way, the scene where Shen Yi is on the phone at the end... it's hot. And Shen Yi and his boy are my favorites. Much more interesting than the central couple.

Another favorite ^_^
by shininghero16
June 26th, 2011, 6:33pm
Rating: 10.0  / 10.0
A strong Uke who fends for himself and doesn't surrender his heart to the Seme so easily, and a Seme who truly loves his Uke and would do anything to gain his love and protect him even though it's the Uke's job to do the protecting. Love this scenario!

Who wouldn't love a butt-kicking bodyguard Uke who has his charge completely head over heels for him? It's such a breath of fresh air from those other disturbing clique yaois that tend to lead nowhere.

Fuyuki is an extremely stubborn and heard-headed Uke but it was nice to see him softening towards his adorably devoted seme throughout the short chapters. Kagami was just plain hilarious and a feast for the eyes. It's such a nice change to see a devoted Seme who doesn't clonclude to raping his Uke. =_=;

On that note, this one a must read for any yaoi fan. Really, it would be such a shame not to read it. Whether or not it fits what you're looking for, it's worth a shot. =)

Really good
by yukito-san
May 28th, 2011, 2:08pm
Rating: N/A
I love this manga.I love the art and even though I was hoping for some hard yaoi parts, I was happy with how it turned out.^^ The chibis were really cute = v =. I would've liked to see more of the Kadokura x Shen Yi couple though.
Was this comment useful?  Yes

Pretty Good
by Sasageru
May 27th, 2011, 4:17am
Rating: N/A
XD This is a pretty good manga. First of all the art is attractive, clean and easy to follow. Also, i dont think theres a single ugly character in the story somehow. Anyway, the story itself is pretty good but has some slow moments with little momentum to carry it through, so there were moments where i found my mind straying. However, the characters relationships and chemistry make up for it. The last few chapters were the best in my mind. I also liked the 'novel' part during the final chapter *laughs* Taking everything into account i'm happy to give this 9/10 - missing a mark because the story does have its very slow moments.
Was this comment useful?  Yes