Login to add items to your list, keep track of your progress, and rate series!
Description
1-2. "Bokura wa Sore o Hitei Dekinai" (We Can't Deny It)

From Yaoi Is Life:

In Spring of his junior high 2nd year, Saitou got in the same class as Suzuki. Receiving Saitou's help while being bullied in first year, Suzuki smiled shyly while thinking, "what if we became friends". Saitou is becoming more and more conscious about Suzuki and their relationship starts to change?!

4. "Bokura no Ashita no Houteishiki" (The Equation to Our Future)
Sequel to Bokura ni Matsuwaru, etc. 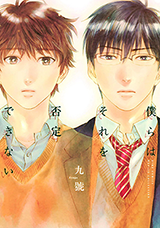 It's not bad
by OmNom
July 23rd, 2019, 9:33pm
Rating: N/A
Main story was actually quite engaging, and the dual-perspective storytelling method was pretty effectively employed. A more proper ending would've been appreciated but I understand the mangaka was pressed for time and had to condense the intended third chapter and merge it with the second one.
Second story is rather vague and a bit questionable in nature, but since it never got developed it also never really went anywhere. Kinda hard to comment on that.
Last story is the sequel to Bokura etc. and it's relatively alright I guess. Keita's personality helped lightening up the tone and adding some humour to it.
Overall it's not a bad anthology though some clearer direction and closure wouldn't hurt.
Was this comment useful?  Yes

It was great but...
by YanaseRyoko
May 9th, 2017, 11:23am
Rating: 10.0  / 10.0
my heart doesn't feel the same.
It was so emotional and beautiful but right now I'm feeling quite depressed, I'm talking about the first story this masterpiece really got me... really hard actually. I kinda hate and love the ending, I have mixed feelings about it but I don't regret it I loved it.
Was this comment useful?  Yes

Feels... Incompleted
by aiish
July 1st, 2016, 12:34am
Rating: 7.0  / 10.0
Well more like there isn't any closure. If anything this was more shounen ai rather than yaoi. I loved the mood and tension for the first story but the ending SUCKED!!! Had potential but it was like she gave up on that couple. I also wanted to know more about the cousin couple as well but like all the others it doesn't have closure. I love Kyuugou's work and I see great potential in her. She just needs more faith in herself and stop drawing DJ and get on with her own 'works.' Anywho both stories is a good one time read only.

The rest isn't bad either, but I was a bit sad that the Iku & Kei part had already been included with the You, Me ETC release so there was nothing new here...

Over all very recommended though!
Was this comment useful?  Yes

:-( Sad. Not well-rounded ending.
by Yaoichick
September 2nd, 2014, 6:25pm
Rating: N/A
I only read the first story, hoping it would have a HFN/HEA ending. It did not. I was inconclusive, so I didn't even bother reading the other chapters, fearing they would be the same.
Was this comment useful?  Yes

One of my few favs
by lfb
August 1st, 2014, 1:38pm
Rating: 10.0  / 10.0
The main story is one of the my few favs. I adore stories told from different views and the characters are interesting. The concept isn't original, but the way Kyuugou executed the story was well done. Sadly, the main story is only two chapters long. Lengthy chapters but still, I wish there was more instead of having other shorter stories, which weren't bad but not as good as the main story imo.

Loved the first story
by Chainless
August 1st, 2014, 1:22pm
Rating: 7.0  / 10.0
All in all this was a nice piece. I like sensei's artwork and the flow of the stories. I especially loved the first one. That one had just the right anount of bittersweet feling to it and it was told nicely. I do wish there would have been an extra of the first couple that would had confirme they got back together in teh end but~ we all know it even without it.
Was this comment useful?  Yes

Sweet
by MirayAllen
July 2nd, 2014, 3:11am
Rating: 8.5  / 10.0
I genuinely hope this isn't the last we see of this couple (Saitou and Suzuki). In the end, I think the change of mood from melancholy and past-reminiscing into hope and cheer for the future was, perhaps, a little off-putting, a little too abrupt. However, I do like the promise and I care for the characters enough to be satisfied with it. Overall, it was a very nice reading, with its sad, powerful and beautiful moments, lovely art throughout, genuine characters with genuine emotions and a balanced structure between past (memories) and present life. Of course I would like it to be longer and, if possible, a little bit more steady in the end, but still, it was good.

Can't wait for the next chapters. I want to see more of Iku and Keita xD

Very good ending
by Yhangong21
July 1st, 2014, 12:13am
Rating: 9.5  / 10.0
even thought it's only two chapters i really like the story .. i really like their regrets and misunderstanding.. but i also think that this manga is a cliff hanger hahaha i wanna read more of it !! make a sequel please