Login to add items to your list, keep track of your progress, and rate series!
Description
1-3) Tear drop
After breaking up, Kido Yuusuke decides not to get serious about relationships anymore and goes out with accountant Kamiyama Kouki just to have some fun with no strings attached. Kouki respects Yuusuke's wishes and maintains his distance; it's exactly the type of relation Yuusuke was hoping for, but after being touched by Kouki's kindness, Yuusuke starts to want more than just a good time with Kouki...

4) Our Excuses
Masamune is starting to think breaking up, and making up is a normal for gay men. Shio his straight friend want Masamune to look more for the right guy for him. Wit... More...
1-3) Tear drop
After breaking up, Kido Yuusuke decides not to get serious about relationships anymore and goes out with accountant Kamiyama Kouki just to have some fun with no strings attached. Kouki respects Yuusuke's wishes and maintains his distance; it's exactly the type of relation Yuusuke was hoping for, but after being touched by Kouki's kindness, Yuusuke starts to want more than just a good time with Kouki...

4) Our Excuses
Masamune is starting to think breaking up, and making up is a normal for gay men. Shio his straight friend want Masamune to look more for the right guy for him. With these two friends cheering each other in their love lives, will their friendship stay that way?

5) Crossing
Hatano Ryouichi is an actor who failed another audition. Drinking own his way home, he throws the empty beer can at the trash. He misses, and when he goes to pick it up who does he meet? ...

6) Drop Scene
A short with Yuusuke and Kouki again. What happens when Yuusuke runs into his ex ... Less... 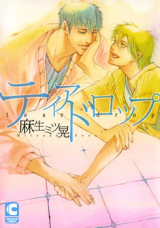 Nothing special, but has its strengths
by zakiue
November 28th, 2020, 1:13am
Rating: 6.0  / 10.0
The plot here is nothing new, and nothing about the characters is particularly interesting. The story proceeds as expected. The art isn't really to my taste, but it's not ugly or anything.

I liked the undefstatedness of the story; I think that's the only thing that sets it apart. What I mean is that there's not all that unnecessary backstory, no unnecessary dialogue. It's like the author knows we know the tropes and isn't wasting our time, but all the necessary elements are still there. There are a lot of "silent" panels and I think that sets a refreshing pace.

The side stories are the same: unremarkable, predictable, but they don't suck.

I didn't hate it, but I won't read it again and I can't really recommend it.
Was this comment useful?  Yes

it was surprisingly cute!~
by Maria-Ayako
August 28th, 2015, 12:52pm
Rating: 8.0  / 10.0
It wasnt so bad even if the ART was not beautiful. Coz i have read mangas with worse art so this wasnt bad at all x)
I liked the stories aside the one-shot with the actor.
The best was the extra =v=
Was this comment useful?  Yes

I'm in love!
by Namiya
July 16th, 2013, 2:38am
Rating: 10.0  / 10.0
This has everything I love in Boys Love!
The only exception is more of an even deeper and longer story and character development, which does not apply to one volume mangas though cause there's only so much space the mangaka can work with.

This has lovable characters, an interesting story that keeps me reading til the end and wanting more, very nice art, well done smut scenes.
There's so much emotion here, it's just wonderful! You get to feel with the characters.

This is the kind of BL manga that I'd recommend to everyone as long as they can stomach gay sex, because it's a definite must read and a great example of the genre!
Was this comment useful?  Yes

Fluffy~
by Kinky-Chan
April 3rd, 2013, 10:38pm
Rating: 8.0  / 10.0
Okay, so I have this urge to hit yuusuke in the first story when he demands like some brat, but then again, the love between him and gouki was pretty much balance, so i forgive him. I mean, I totally dislike brats that demands for attention like no one's business. But after demanding that much, I'm happy and pleased that he understands the hardship gouki is going through and he supports him willingly.

The other stories is pretty interesting too, well written and told in a way that keeps me hooked to the story. Art was okay, overall, it's a pretty good read.
Was this comment useful?  Yes

nice read
by tmthuy
March 18th, 2013, 1:43pm
Rating: N/A
The story does fall into a lot of cliché, but the way the author delivered the story made the book really enjoyable, especially chapter 4. I was in tears at the end of chapter 4. Although the situations presented in the book are nothing new, the story was really touching in overall.

Pleasantly Surprised
by Astur
March 17th, 2013, 4:17pm
Rating: 10.0  / 10.0
I'm really glad I decided to read this manga. Like the comment said above, don't judge a book by its cover. I've read a lot of manga in my time and have become more selective because of it (which is a good and a bad thing). However, I decided to give this a shot even after I saw the slew of Bleach doujinshi in her previous works.

Honestly, I wasn't quite expecting something so beautiful though. This author has a lot of talent. The paneling is wonderful, great characterization, great art - really, this person is just a step above any yaoi manga I have ever read. Trust me, read this to the end. I'm glad I did.
Was this comment useful?  Yes

don't judge a book by its cover
by mizscha
August 31st, 2012, 8:32am
Rating: N/A
seriously though, i've been ignoring this since forever mainly because its cover. somehow, i started to read halfway the first chapter and dropped it again because i thought yuu was annoying. i read it again anyway for certain reasons, and boy, it was great. the story got better, trust me.
the story was nothing unusual but the way the mangaka portrayed this story through the characters did make a different and entertaining.
Was this comment useful?  Yes

Heartbreakingly lovely....
by elliemoran
June 16th, 2012, 10:46pm
Rating: 10.0  / 10.0
I'm falling in love with this mangaka - she has such a good sense of timing and characterisation - the panels where nothing happens mean just as much as somebody elses full page of text.

I thought the first chapter was decent, but the third chapter blew me away - I was in tears and happy, all at the same time.

The situations are not new or unusual for a yaoi, but the way the characters react and grow is very well done and satisfying to me, especially for the length.
Was this comment useful?  Yes