Login to add items to your list, keep track of your progress, and rate series!
Description
Eichi has always been in control but when he notices baby faced Souta has been taken advantage of, can he really keep his composure? 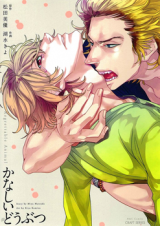 Very good, could have been better, ended too soon
by JHax9999
August 3rd, 2018, 10:42pm
Rating: 6.0  / 10.0
Manga ended just as it was getting good. The main couple spent more time apart than together. Most of the manga is them obsessing over one another, longing for one another, but they never bother trying to talk with one another. That's so annoying. Y'all both gay and into one another. Just talk it out honestly for two minutes, and y'all could've save yourselves all this angst and drama.

And what's the deal with that scumbag boss? He's just gonna get away with that kind of scumbag behavior? Dude should have gotten his ass kicked for sure.
Was this comment useful?  Yes

Prude?!
by blueseeker
August 10th, 2015, 5:55pm
Rating: 5.0  / 10.0
I would have never thought that this series would make me realize anything about myself..... Boy did I get a shock! I read this before and HATED it then but couldn't remember why.
Spoiler (mouse over to view)
It's all the guys the Uke kept having sex with like a slut, all while pining for someone else. Usually I demand smut, but in this case the mangaka should have just shown that he was dating others only. I understand that it was to show us how little he thought of himself, but wouldn't doing it make you a dirtier person?
I can't stand when the Uke builds obstacles in his head, even if due to a childhood trauma.

Ugh, seriously I would not feel so bad if they had spent more than one chapter together, instead of all the others.
Was this comment useful?  Yes

c'mone it's not that bad
by kidoraku
December 30th, 2014, 1:32pm
Rating: 7.0  / 10.0
Well it's not "brilliant" but it's a nice angsty read. It's quite unique for the author to create so many dislikeable, mean characters, so I just say it's in some way a moving story. I wasn't so pissed for a long time while reading sth. Also the details, background, the motive with grandma and the art, the mangaka put some effort to create this all, to give some depth to this story. I appreciate this. Maybe the ending was a little rushed and kinda "flat" - like OmNom said, it should've been longer but I won't complain that much. The Art is refreshing, not pretty, but hmm I liked it.

Give it a try.

Anger
by hotarusasaki
December 4th, 2014, 2:33pm
Rating: 7.0  / 10.0
I can reasonate with Eichi, the side characters were awful, with the exception of Eichi's "boss", and they just made me so angry! At least I liked the main characters I guess and I like the angsty stuff. If only the side characters weren't such ***holes! From the cover I thought I wouldn't like the art but the artwork was actually quite nice! The plot was also my taste, so no complaints there I guess.
Was this comment useful?  Yes

Who knows
by Tentacle
July 29th, 2014, 5:33am
Rating: 6.0  / 10.0
I am glad to have read this even though it wasn't very good. The story is quite simple and enjoyable with pretty art, but the characters are awful and not very likeable and that makes the story awfully executed. This could have been great but instead it's more annoying than anything.
Was this comment useful?  Yes

Typical, but not in a good way
by OmNom
August 24th, 2013, 11:50am
Rating: N/A
Well, the obvious has already been stated below. The first couple of chapters are really intriguing (admittedly I'm quite fond of imagery metaphors) but that's it, after that things just begin to crumble and fall flat in the end. The promising development hinted at the beginning also didn't happen but turned out for the worse. After reading till the last page, I decided to categorise the manga as another typical BL story with typical characters and typical actions to carry on a typical plot driven by - you guessed it - typical developments and motifs. If anything maybe the art isn't too typical and all but that doesn't necessarily mean it's ingenious either.
Was this comment useful?  Yes

The man looks like a freaking LION!
by MirayAllen
May 17th, 2013, 2:38pm
Rating: 7.5  / 10.0
It's true, I smiled like a stupid kid at the zoo every time you could see his majestic mane, ahah. Also, I don't agree that the story was that average. I mean, sure it could use some work around the edges but I liked more than a few things about it, namely Souta - his loneliness, his chocolate, the whole deal I found it painfully adorable. It could definitely use more chapters though; for starters, there was a little tiny bit of angst but with characters such as these you could get a hell of a lot more -- what drove me here in the first place was the "bullying" category, a huge, powerful subject, and so I got a little disappointed in the way it got discarded so bluntly. But other than that, it was quite an enjoyable reading. The high rating is mostly on behalf of the art. I absolutely adore it. I keep coming back to this manga on account of the art alone. Ah!

so blah
by sallyen
May 14th, 2013, 4:10pm
Rating: 5.0  / 10.0
I thought I liked the story, turns out I didn't. The characters seem flat, the story seem flat and overall the story is pretty blah. The story doesn't deal with anything that's brought up so it's like reading a half-story of something.
Was this comment useful?  Yes

Ruined expectations
by EndlessNaru
May 7th, 2013, 7:38am
Rating: 6.0  / 10.0
The first chapter looked interesting, but now that I've finished reading it I can say that the rest is pretty meh. The characters act because of reasons that can't be grasped, the plot is superficial, the last chapter doesn't clarify anything and there are some WTF moments that really need to be explained.
I liked the edgy art, though.
I suggest the reading to someone really bored who wants something short.
Was this comment useful?  Yes

Stupid character
by mtmt1311
March 9th, 2013, 11:42pm
Rating: 5.0  / 10.0
Shouta's attitude is just wrong. Sure, he does not want to dirty Eichi so he does not want to to be with. Yet, it his damn fault to be so loose and dirty in the first place, he slept with other people. Suddenly, he randomly become strong(?) and decided to be with Eichi (did he get any cleaner now?). Would it be nicer if he treasures himself at the beginning and when Eichi shows feeling for him, he can say yes without worrying about being dirty?
Was this comment useful?  Yes