Login to add items to your list, keep track of your progress, and rate series!
Description
Reborn in another world! But there's too much rice! The elves are cute and have a nice atmosphere, but I can't live as they do! With the cooking skills of s professional I'll surprise the elves !!
Cutting-edge !! Of a different world gourmet. 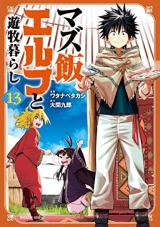 A "standard" isekai comfy cooking series, but with a LOT more twist.
by poser27
April 28th, 2022, 9:44am
Rating: 9.0  / 10.0
The MC is a pretty standard non-professional (underaged) cook/chef but is an OP culinary genius who can start a culinary revolution if he wants. It's also a comfy story where his new home is a pretty accurate low-fantasy steppe nomad society (who happens to be elves), where he cooks and make everybody happy.

Until we meet another isekai'd person several chapters later, and the overarching story gets a lot deeper and more interesting. After we meet the second isekai'd person, the story gradually shows us that while MC is pretty OP in cooking, he really is just an above average fish in a giant pond.

Some spoilers for characters the MC later meets:

Spoiler (mouse over to view)
A sidhe from the island of Avalon who is highly implied to be Morgan le Fay
who is much more wise and knowledgeable than the MC.

Spoiler (mouse over to view)
A disciple of Epicurus
who is an actual philosopher and actually manage to shift the genre a bit to Psychological in some of their chapters.

I may write the above paragraphs as if the genre gradually shifted, but it's not really; the main story is still as comfy as ever, the focus is still on cooking, just with more (non-violent and quite realistic) conflict added.

There ARE a tiny bit of violence (and fanservice) later, but it's from one of the side stories. And these side stories (where the focus is the supporting characters) is REALLY good at adding to the worldbuilding.

actually really enjoying
by SNOWBY
January 10th, 2021, 8:39pm
Rating: N/A
I really like this one. It's still got the "OP male lead who knows everything and must teach these dumb ancient people" trope, but I love the culture (Mongol nomad elves YES) and it's sort of cute.

It's also surprisingly self-aware and has meta-commentary like Morgan le Faye showing up and discussing Tolkien and how he influenced elf literary taxonomy. (No, really.)

There's practically no fanservice, which as a girl I appreciate (chicks don't do a thing for me, and while I understand guys like fanservice, it's nice for the female chars to have more personality than just boobs. I love fantasy and the isekai genre so avoiding "all girls are just objects with little personality and even fewer scruples" ones is like walking through a minefield.) (Yeah I know girls do it too but fujoshi-written series aren't mainstream and are pretty clearly labelled. You don't TYPICALLY accidentally end up with one.)

Seriously, this is an under-appreciated gem. And you'll actually learn some food history. (The way 2020/2021 is going, maybe learning how to produce your own food ain't a bad skill to have. You know, for when the murder hornets show up. Those are still coming, right?)
Was this comment useful?  Yes