Login to add items to your list, keep track of your progress, and rate series!
Description
Keisuke has taken on the debt of a junior by borrowing money from the black-market lender, Suganuma. But, when the loan is due, Keisuke can't return all the money. So Suganuma is asked to do H things with him in exchange for the interest due. While using his body to pay back the rest of the debt, a relationship grows and Suganuma starts to be attracted to Keisuke's bravery... Will the situation go on as expected?!
Official English Translation 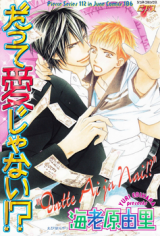 Replace the uke with a weak girl and see no change.
by F0rcefi3ld
July 19th, 2014, 1:03am
Rating: 5.0  / 10.0
I don't mean to demean girls, but I mean the cliche, airheaded shoujo heroines. The uke is so fudging stoopid. He doesn't learn. Ever. I only finished this for the drawings and the smex. 3/5ths towards the end I stopped reading and only looked at the drawings.

Lol no.
by OmNom
February 5th, 2014, 4:36pm
Rating: N/A
I get that this could be more 'enjoyable' to other people, but no thank you very much, I can't keep on wasting my time with something so idiotic to this level. When a story wants to steer to a sillier route it should just stay out of the serious zone and focus on making the most of the silly characters. In this story though, not only is the main character so idiotic it's unbearable, the 'serious' situations that he got himself involved in are equally frustrating and I kinda just wanted to flip a table in the middle of reading. It's just.. impossible to finish this without smacking something to relieve the mental pain.
And no, people, this is not great smut. Tolerable maybe, but no where near as pretty/ steamy/ juicy/ arousing as a lot of other artists' out there. You have to read a lot more to see that this is just borderline H at most.
Was this comment useful?  Yes

One word: moron
by chibit_tan013
October 22nd, 2011, 8:06pm
Rating: 8.0  / 10.0
This is pretty much a perfect smut yaoi. The uke is an idiot and seme is an idiot in a whole separate way. The whole plot is so absurd that you help but laugh at it. If you're looking for a [good] plot, go elsewhere, but for a healthy dose of fluff and smut, read it!
Was this comment useful?  Yes

Eh.
by Xen Warrior
August 24th, 2011, 6:31pm
Rating: 5.0  / 10.0
This manga is good for the purpose of pure fluff with practically no plot. The uke is a complete idiot who is unable to learn from his mistakes. It does remind me of Okane ga Nai, but this manga is more fluffy, smutty, and empty headed. It also annoys me that this is a manga with no females and all the male characters are gay. Not a bad quick read and I do love the art. The chapters are repetitive as well. It's nice for a quick read in between two plot-based manga.

A sexy debt-themed read with expressive, if mundane, art.
by MightyMaeve
April 21st, 2010, 3:18am
Rating: 8.0  / 10.0
An enjoyable read that is mostly smut but with enough plot weaving so it kept the pages turning.

It is a 'sex for money to pay a debt' style story, but it doesn't have the dramatic feeling that Okane Ga Nai overflows with. Each chapter is our hapless uke falling into constant willingness to trust people and then getting taken advantage of until his knight (the first one who took advantage of him) comes to save him. Kei's constant forgiving and lack of self-awareness was a bit unbelievable, but he was just too damn cute to hold it up in comparison to the 'good character development' chart. He certainly is believable for needing a protector! There are a few scenes that got my emotions going, i.e. when the gruff seme says hurtful things.

The last couple of chapters are one shots. There is a daycare worker with an oyaji fetish and even one with urethra play.

the art is gorgeous as can be expected from sensei
by xono
September 27th, 2009, 7:33pm
Rating: 6.0  / 10.0
the subject title says it all. it's because of the art that I seek this manga. being a yaoi reader, this is fine and good. Story and development wise is not something I would recommend who seek for them. The thing is, this is truly a yaoi.
Was this comment useful?  Yes

Good when you've got nothing else to do
by brid
March 2nd, 2009, 4:16am
Rating: 6.0  / 10.0
It's not a great manga, not by any stretch of the imagination, but you know what? Datte Ai Ja Nai!? does have some fun moments. If you're in the mood for something mindless, this will fit the bill perfectly. First of all, the manga in no way, shape, or form ever takes itself seriously. The plot itself is an utter cliche that gets recycled from smut manga to smut manga: a young innocent finds him/herself in a forced relationship with someone much wealthier due to money troubles. This plot and all of its complications plays out identically whether its being done as a yaoi, shoujo, or even shonen manga. Ebihara Yuri doesn't try for even one second to deviate from all the cliches which always come up in this genre. Instead she wallows in them.

Is the uke too stupid to live? You bet, that's the whole point. If the uke wasn't that dumb, there would be no story. Every chapter plays out the same way: the uke meets a seemingly nice man who tries to give him a job/help him get out of debt to the loan shark. The uke gratefully accepts the man's help only to discover he was a pervert all along. And juuust before he gets raped, the seme loan shark shows up and rescues the uke, which results in the two of them having make up sex afterwards. Every single chapter. It doesn't deviate from this formula at all. A few times, the uke even tells the seme ahead of time about the new man he's met, only to have the seme warn him that the guy can't be trusted--good advice which the uke promptly always ignores. This sort of stupidity will rub a lot of readers the wrong way, but the manga doesn't think too deeply about its plot or any of its characters and isn't asking you to either. If you can suspend your disbelief and laugh at the characters in the same way the manga is secretly doing, you might find Datte Ai Ja Nai?! to be somewhat enjoyable. In no way is it a good manga, but it will kep you entertained when you've got nothing else to do, or when you just want to vegitate with something that isn't though-provoking.
Was this comment useful?  Yes

A damsel-in-distress comedy manga
by ZeroNine
October 24th, 2007, 6:33pm
Rating: 3.0  / 10.0
University student Keisuke is gullible, naive and unbelievably stupid. Loan shark Suganuma knows it and repeatedly takes advantage of it. Time again and again Suganuma goes to Keisuke's rescue. You just know that whenever Keisuke in danger of being ravished, Suganuma will arrive in tick of time and he does. Hum ho. Keisuke's actions constantly inspired me to mutter, "What a dumb f***." I like comedies but Keisuke is too much TSTL* for my taste. It's cheerful and perky enough for yaoi readers who like this type of comedy.

[*TSTL ~ too stupid to live]
Was this comment useful?  Yes

OMG
by LadyKadaj
August 18th, 2007, 2:38pm
Rating: 9.5  / 10.0
omg i didnt know this one had a chap 7 until i saw it here. this manga is really funny and entertaining... uke always ends up in some deep shit and its up to the cool seme to rescue his dude in distress. may sound cliched but its the way they portray it all that counts...

worth reading and giggling. the 2 unrelated stories are also funny!
Was this comment useful?  Yes