Login to add items to your list, keep track of your progress, and rate series!
Description
From VIZ Media:
In 2015, the "Angels" have returned, and Shinji Ikari, a fourteen year-old child of the new Earth, is forced by his father -- Gendo, commander of the secret organization NERV -- to pilot the monstrous biomechanical weapon called "Evangelion" to match the Angels' fearsome power.


Latest Release(s)
v.14 c.Extra Stage by interforme over 2 years ago
v.1 c.1-4 by Comic Walker over 7 years ago
c.89-91 by MangaCanyon over 10 years ago
Search for all releases of this series 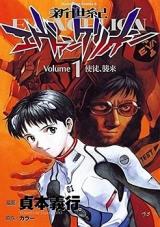 As Someone Who Loved the original series but didn't like EOE
by fairly_foxy
February 19th, 2019, 2:28am
Rating: 10.0  / 10.0
I think this manga is way better and corrects many flaws I saw in the original series and especially the horrendous ending (to me) that was EOE
Spoiler (mouse over to view)
which was basically a character assassination on every character they built up to that point. And in the manga Shinji doesn't wank over Asuka which is like the biggest most horrible thing to ever happen in the series. It felt completely out of character and I am glad this manga doesn't have that
And yes, everything about Asuka is different in the manga but I think I enjoyed that most. I think her character arc makes more sense in this than it did in the anime.

A lot of the side characters were given backstories and more depth. And most especially I enjoyed every last change to Kaworu's character mostly because in the anime he HAD NO CHARACTER. I actually feel like the manga makes sense especially if you weren't ever comparing Evangelion to some Christian mythos and actually knew things that had to be changed in the original.

A lot of the things that were originally supposed to be there are here in a way. And sure, Sadamoto takes his own spin on it but I think that is a GOOD THING. This manga would be worthless to me if it was exactly the same. Totally a shame that people can't judge this manga on it's own merits.

Honestly, if there were things that bugged you about the anime... I would say to read this manga. It is really good. And I really wish there was an anime version of it.

I think because you get a window into everyone's thoughts this manga is much more preferable for someone who wants to know what was actually going on. The lore is explained better to me.

Also I loved the final chapter.
Spoiler (mouse over to view)
I seriously cried like a mom about Shinji being happy

Nostalgic thanks to the art
by Hoodspirit
July 25th, 2016, 9:29am
Rating: N/A
The most important thing first: The manga is different from the anime.
While it still follows the basic outline of story including End of Evangelion, there are fundamental differences.

The most obvious differences are with the characters, their personalities and motivations are often not even close to the anime.
The conflicts within and between characters are watered down as well. Logically Asuka suffers the most from this simplification, wether the manga-ka didn't understand or like her or just simply did not want to make her fit in his story I don't know, but she is just a side-character here.
Some may welcome these changes, others might not, it is up to you.

The art is what you expect from the original character designer, no issues there at all, just praise.

Last thing I want to comment on is the storyline. As I said it follows the outline of the original story, but it has a few important changes here and there. Unfortunatly these changes are not utilised with follow ups. Example:
Spoiler (mouse over to view)
Toji gets killed from the dummy plug system and Shinji feels responsible, but there is no confrontation with Toji's best friend or his love interest or anything else which makes this change count for the story
.

The ending is not acceptable.
Especially not for a manga that ran 20 years with just 14 volumes. This absolut fact has nothing to do with shippings or anything. Prepare for a huge disappointment.
One can still enjoy the ride towards the end even with knowing it however.
Was this comment useful?  Yes

The ending
by andy_f
December 12th, 2013, 9:40am
Rating: 7.0  / 10.0
I only read the manga so far and not the anime or any of the movies but from what i read about them there seems to be quite a big difference between them.
When i finally read the last chapter (ch 96) i was incredible unsatisfied, i mean in my opinion it was absolutly terrible the way they ended it BUT......
After looking around for a while i found out about the alternative endings; Evangelion Re-take and Evangelion Re-take After which in my opinion is a ending the series deserved (i still would of prefered something different about the ending, mostly the choice of heroine but i cant say without spoiling the ending and i dont know how to make a spoiler box thing to hide it lol)
Was this comment useful?  Yes

One of the first manga i bought a long time ago
by residentgrigo
October 19th, 2012, 9:08am
Rating: 9.0  / 10.0
I prefer the Eva manga to the anime/movie source material which may be sacrilegious but isn´t it weird that 5 movies, countless other awful manga/games and so on happened in the amount of time the series took to get to the endgame. The final result is worth any fan´s time though as the narrative is clearer and emotional than the source material. The characters are more likable characters too and there are no budget problems or creator breakdowns either which both enhanced and damaged the original vision. The art is also very good and clearly evolves over time.
Update: The series finally ended with the bonus epilogue in Vol. 14. The end is a bit mysterious but i like it and can now finally say that Sadamoto´s take is the best version of the franchise (3.33 is a mess so that can´t end well) and it took only 20 years (started in 1994 to preview the anime) to finish... All's well that ends well.
Your turn now Miura and only Mobile Suit Zeta Gundam Define (9,5/10) can call itself the better mech manga.

The Anime was Produced First
by Crownowa
April 6th, 2012, 11:46am
Rating: 10.0  / 10.0
The manga was just promotional material for the anime series, so it was released before the first episode was shown on TV. The mangaka makes a volume every 1 or 2 years. There's many small differences so far. If you like the anime, movies, and Rebuild, you should read the manga. It will probably take a few more years for it to finish, but the last Rebuild is coming out next year at best.
Was this comment useful?  Yes

ending
by ferreroman
May 27th, 2011, 12:38am
Rating: 10.0  / 10.0
hey people look, there is a movie called the end of evangelion which start exactly where the manga ends, so please don't get disappointed about the ending because it was so big that the author thought maybe it was better to wait and make a movie with it since the manga its incomplete and the movie fits perfectly in the storyline
Was this comment useful?  Yes

uh... This is just too much trouble to pick up again...
by asrodeia
April 23rd, 2010, 4:20pm
Rating: N/A
Hmmm this was my second series. My first was 15 pages of Rave Master (borrowed, then I had to leave....) Then this... and I gotta say, I'm finishing my freshman year of college right now, and in 7th ish grade I started it... and I haven't progressed since they stopped coming out for a while, and I moved on. Plus, I left off
Spoiler (highlight to view)
WHEN TOJI DIED (he was the cheery idiot friend, right?). wtf there goes the comedic relief.... as soon as he started getting serious and stuff, it was a signal that all the good was leaving the world... etc.

Do NOT read if you are already feeling down.
I don't really want to get back into this, because this seems to be just way too complicated... and there are too many versions... can someone explain why there are different versions? I usually get so confused in times like these.... pm me or something.

Its back
by Rhades
July 27th, 2009, 12:05am
Rating: 9.1  / 10.0
The manga is or will be resumed, im really waiting 4 it, its gonna change from a shonen magazine to a seinen one. really looking 4ward to it. I wonder if a team will scanlate it but i hope so. The new rebuild of evangelion series is awesome as the manga, cant wait to see the end of one of the most exceptional story ever but somehow its legend is that it left us without an end, lol
Was this comment useful?  Yes

Good but disappointing ending
by ButterflyNinja
January 8th, 2009, 3:25am
Rating: 9.0  / 10.0
This was for me, like many other people one of my first series. I really enjoyed the mecha, action and entertainment with the plotline. However I don't wish to put anyone off this series (I still reccomend people read this series) but it had one of the most disappointing endings ever. When I think 'bad endings' I instantly think of this series.