Login to add items to your list, keep track of your progress, and rate series!
Description
One day the world perished, and a group of monsters emerged to control the whole world. In this eschatology, a group of people awakened and each acquired different special abilities. They are constantly escalating in the struggle, trying to save the world. The infinite chaos mode of the Daguai upgrade will be opened soon... 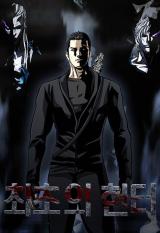 One nice adaptation, sadly too rushed.
by MrZerooo
January 5th, 2022, 12:24pm
Rating: 7.0  / 10.0
I waited for the end of the series to read all in one go and my opinion is similar to Eyehax(the last opinion's dude).
If you want to know more about the world and the other characters, give a try to the novel, is already full translated too.
However if you just want to know about the big question in the ending take a look above.

Spoiler (mouse over to view)
This is the last appearance of the protagonist in the novel and a piece of the last chapter:

Located at the southernmost tip of Africa, it was a place of the greatest despair in the monster era. The reason was simple: South Africa could not expect any help or aid from any country, nor did it have the military power or relics to win a victory in the war against the monsters. It did not take long for Johannesburg, one of the major cities of South Africa, to become a huge tomb.

But there were those who survived in such a world.

“Come on! Quickly!” It was the case for a boy and a girl who looked to be about ten years old at best and looked enough alike to be siblings. It was a miracle to have survived in a world that had been worse than hell for a long time. At the same time, the two young siblings were evidence that there was still hope in South Africa.

“Brother!” But now that hope was becoming a candle in front of the typhoon.

Khung! Khung! It was because of a huge dog with yellow eyes that tried to eat that hope in a terrible and grueling way. It was unusual that the dog had two heads, and was big enough to chew up even the elephants out on the savannah. It was a yellow-grade monster, a Killer Dog. This monster of the monsters was twice as ferocious as the two heads, and the two young siblings could not deal with.

“Ugh!” The girl, who was crossing the collapsed building, fell on the ground, and the boy, who was reaching out to his sister through the little hole, was frightened.

“Lia!” At that moment the boy ran towards his sister without worrying, without hesitation.

“Run! Run away!” The boy knew that if he threw his body at the monster, if he wet his skinny neck, his sister could run away while the monster savored him. It was the only way in the world to save one, not two. He knew that there was no such thing as a miracle or salvation in this world. The world in which the eleven-year-old boy lived was such a world. To a boy, no, to a much-too-young man, his sister’s life was more precious than his own in this fucking world.

“Quickly!” The boy’s cry had become a howl at some point. “Quickly!”

“Brother, you run away!” the girl shouted at her oncoming brother. The cry baffled the boy. At this moment he agonized over what to do to change his sister’s mind.

Khung! Khung!! Meanwhile, the Killer Dog burst into a pleased cry at the tender smell of flesh that was just around the corner.

The despair of the living and the joy of the monster filled ruined Johannesburg.

Thump! The end of that sound was one of something falling from the sky.

Khung? Khung? The appearance of the sound changed the cries of the monster, while the two had looks of admiration and surprise.

At that moment the screaming Killer Dog fell to the ground. Blood oozed from its two-headed temples and began to soak the ground.

Then, the two, who were hugging one another, looked at a man who they could see only in silhouette, his back to the sun, with their trembling eyes. Soon after, young George asked as he looked at the man, “You, you…” George was speechless. At that moment he recalled a word that people had been looking for in the sky from a dark memory.

“Are you a Messiah?”

The man answered the question. “No, I’m Mac Guild’s Hunter…”

Keueoeoeoeong! Before the man’s words could finish, there was an intense scream, incomparably more powerful than the monster before. The source of the scream was a giant dog, Cerberus, with three heads, and burning blue eyes.

At the absurd scream, the faces of George and Leah went white. They remembered that there was not a single being who had survived in front of this monster that ruled Johannesburg.

On the other hand, the man frowned as if he were a little annoyed, instead of being nervous or worried. Tsreung! Simultaneously, as he frowned, one of the two swords on his back moved.

Whoosh! The sword flew through the wind and cut off all three heads in a single breath. The process was so easy, so simple. Soon the drawn sword returned to its original home.

The click of the sword going into its sheath was very clear.

At the end of the clear sound, the man uttered his words. “I am the First Hunter, Kim Tae-hoon.”

Decent
by Eyehax
August 6th, 2021, 6:04pm
Rating: N/A
Post apocalyptic cultivation(somewhat) styled manhwa... It is more mature and serious as stated in previous comments then say Last Human, but the manhwa is rushed... Read the LN named the same for more explanation and tie ins to understand some missing and rushed parts of this
Was this comment useful?  Yes

Not bad
by PZcolo
November 17th, 2020, 5:06am
Rating: 6.0  / 10.0
Another story like "Last Human", monster apocalypse, monsters by tiers, humans eat monster cores to cultivate and gain skills and so on, plus special ability treasures. The biggest difference with the myriad of similar sotries out there is that in this one governments don't collapse and disappear, that part never made sense in this settings imo, it's a nice change but opens the board to countries internal and external power struggles, depending on how it's done, it can be a good thing, or a bad one. Also, this one is more serious than most similar stories, more "mature" one might say, has less dumbness and doesn´t have comedy (at all), which I prefer over bad comedy. Also,
Characters are ok, a bit two dimensional and there is as far as I've read, no development. There's also a feeling of the story being in fast forward, something quite common in novel adaptations (I don't know if it is an adaptation but I'd bet it is), there seems to be small skips in the narrative of the story, nothing terrible but it leaves me with the feeling of things half explained.
Overall, the best of this kind of post apocalyptic cultivation stories, I've read about 6 of them so far.