Featured in the anthology Oshioki yo!.

Latest Release(s)
c.Oneshot by dangerous pleasure over 16 years ago
Search for all releases of this series 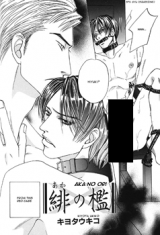 I hated it...
by Airendy
August 23rd, 2014, 8:13pm
Rating: 6.0  / 10.0
I don't know what people see in this legal but this story was horrible. I hated, in addition to the older brother be cruel and this is it worse that I don't know, the idiot of more new continues to follow it. I expected something better for this manga.
Was this comment useful?  Yes

Confusing!
by AngelCharms
June 15th, 2013, 4:32pm
Rating: 7.0  / 10.0
That's what I felt at the end of the manga. What's going on? Does the brothers care about each other or are they simply licking each other's wounds? It does have potential. Could've been so much better but sadly it's one shot.
Was this comment useful?  Yes

Potential
by Sasageru
May 24th, 2011, 4:00pm
Rating: N/A
Had this been a volume or series it would have been great, but as a one shot its rushed, and theres little time to discover the characters, their history and current situations. We only get the absolute tip of what could probably be a huge ice burg.
Was this comment useful?  Yes

Good- could have been amazing
by kahori
May 28th, 2008, 3:40pm
Rating: N/A
Was really good, quite shocking, but would have been better if slightly longer to make the plot seem clearer. The art was very good though, and it was quite shocking how brutal the brother is...
Was this comment useful?  Yes

Eh... it felt really rushed
by VampireBanana
May 10th, 2008, 11:31am
Rating: 3.0  / 10.0
Eh, it felt really rushed and seemed extremely confusing 'cos it substituted plot and sequential scenes with info dumps. If it'd been properly fleshed out, it might've made an interesting story. As it was, it really made a poor piece of work.
Was this comment useful?  Yes

yup.
by mydisguise
February 1st, 2008, 11:25am
Rating: 5.0  / 10.0
mhm, i definitely agree with mightymaeve. this was a good start, but it cant just end like that. people normally like SOMETHING near a happy ending. well, not always, but nothing actually HAPPENED in this manga. his situation was explained, and thats it. the characters are all very good, but this needs to be carried on to make an actual story.
Was this comment useful?  Yes

Very Tragic but I Want More
by MightyMaeve
January 30th, 2008, 3:42pm
Rating: 6.0  / 10.0
Strangely enough, I liked this one. It was very tragic and sad yet deliciously sadistic and masochistic too. This one is definitely not for everyone - it deals with very angry and desperate people and situations.
The only reason I didn't rate it higher than 6 was because it was under-developed. I would have loved to see this one fleshed out into at least a few more chapters. The characters have potential to be very three-dimentional and would grab hold of me (the audience!) in a very powerful way if I went on a longer journey with them.
Was this comment useful?  Yes