Login to add items to your list, keep track of your progress, and rate series!
Description
Day after day, honor student Hwang Dong Wook gets called out by the bullies in his class to serve as their punching bag. Day after day, the last-ranked student Choi Yool is shunned by her classmates because of her beauty and her grades. As it happens, the sullen boy and the carefree girl sit next to each other in class. When the top student is asked to lure her into the bullies dirty schemes, their lives take an unexpected turn... 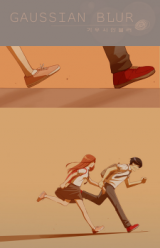 Interesting but Could Use Better Execution
by blackluna
January 22nd, 2016, 3:16pm
Rating: 6.5  / 10.0
Up until the ending this seems to be a modern reflection on growing up and living. However, the last few chapters are exceedingly confused, even the sentence structure. It seems that the author was trying to use the ambiguities in the characters' relationships, especially of the protagonists (thus the title), but was only partially successful. Ambiguous endings are fine, but this one had a confusing attempt at an ambiguous ending. Part of of it was beautiful, nonetheless.

Webtoons huh?
by jeffreymgibson
April 8th, 2015, 1:03pm
Rating: N/A
I think I'm going to stop reading these Korean webtoons. I don't really even understand what this author is trying to say. You have two characters that act very strange, they don't express any emotion, then in and 2nd to last chapter
Spoiler (mouse over to view)
The girl just vanishes. Now why would she leave like that and not say a word, people disappear in manga all the time like this, but I've never once seen it in real life.
Then too top it all off, what the heck was that last chapter, huh? A dream maybe? Or death? I have no idea. I'm just going to quit reading Korean comics, just about every one of them I have ever read has left an empty or unsatisfied feeling behind.
Was this comment useful?  Yes

It's pretty good, very relatable to some, but the ending's iffy
by bobIV123
January 17th, 2015, 2:07am
Rating: N/A
Personally I worked my ass off in school and dealt with some of the same emotions the main character deals with, so it was interesting to watch what he did. Overall, I think it's a nice, fairly short read; however, the ending is a little...abstract...but still somewhat satisfying I guess. With a more concrete ending I'd give it a 9.
Was this comment useful?  Yes

Then I read the last chapter.......
That's not even a bad ending or a rushed/axed ending that's just I don't even know what that is......
Was this comment useful?  Yes

There's something strangely beautiful about this
by MatrixM
April 14th, 2014, 8:33pm
Rating: 6.5  / 10.0
I thought I'd made a comment on this back at chapter one. :/
Probably getting confused with the scanlator's website.

Really, I'm not even sure what to say if I were to give a synopsis for this series. It's simply a slice of life, but that doesn't seem to be enough to describe it.
I think, perhaps, I can relate and empathise with the two characters here, even though they're hardly the same...though they do have something about them, some core thing, that is the same, and that grows int he first few chapters.

Whatever it is, even from back over a year ago when just the prologue was translated, I've felt curious about where this is going, what is this atmosphere?

Recently, I can say there's something... beautiful... about it.

But where can this go, considering it's only 34 chapters...

Edit: so 8 years later I come back to finish the series. The above was written after reading Chapter 12, then scanlations stopped for a while. Now all is available:
Unfortunately the translation quality makes some lines of dialogue very awkward to read.
The story overall is....ok. Just ok. There's some small growth in character but it's very small, we're truly seeing a small slice of their lives, though it's a very significant one.
I...don't know what to say. Even now.

I am decreasing the rating from 7.5 to about a 6.5, As it's something you can go your life without reading and I don't think you'd lack anything from it.

Understandable
by flowerjelly
February 12th, 2014, 7:38pm
Rating: N/A
I could really understand the actions of the main character and Yool, and somehow this webtoon comes off quite realistic. It deals with some mature themes too, and had a lot of twists.
Spoiler (mouse over to view)
For one, I didn't think Wook would actually slice that bully.

Overall, a good read for a rainy day. It updates a bit slowly though, and there's only thirty-four chapters.
Was this comment useful?  Yes