Login to add items to your list, keep track of your progress, and rate series!
Description
In these times, if you're too good or bad at something or simply too beautiful, you're called a witch. Up against twists of fate and time, an outcast young boy and a mysterious witch will need more than just magic spells and incantations; they'll need each other.

Latest Release(s)
c.1-2 by Tappytoon about 1 month ago
Search for all releases of this series

The Special Epilogues released Jan 2022 only on BookCube 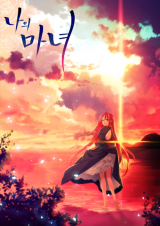 Not my type
by SeesARead
June 23rd, 2022, 9:05am
Rating: 6.0  / 10.0
Not my kind of manga. Its different arcs focus on a different character. Makes it difficult to completely feel for the characters and feels more like side stories/fillers. The type of tragedy in here isn't one that makes you sob but leaves you feeling empty and hopeless.
Was this comment useful?  Yes

Couldve been an emotinal train
by Justsomereader
May 2nd, 2022, 6:35am
Rating: 9.0  / 10.0
I think this series is about how immortals lives their life.
Spoiler (mouse over to view)
but Philippa ark is so perfect (from head to toe) that it makes other arks looks like child’s play (which they are). Lily ark is like wtf, Lily’s half is good but Ian have zero develop that he love her just like *pop*, there is no chemestry, the same goes with others, it makes their feelings so mediocre that it can barely called love.
And i understand that if its just Philippa ark it would be too short and the last chapter would not be as good as it is now, but at least make it worth the while, not just put on some cheap show to pass our time.
Was this comment useful?  Yes

Beautifully Tragic
by Suxinn
June 4th, 2020, 11:55pm
Rating: 10.0  / 10.0
I think this might be one of my favorite webtoons, actually. It's basically the epitome of "beautifully tragic" and it feels exactly the right length, even as it left a lot of endings open. (This is how you successfully write an open ending!)

I particularly really like how the witches are portrayed here, beautiful even in their inhumanity. I think it's one of the most successful portrayals I've ever seen of a group of supernatural, immortal beings and how they live their life. And even as they're wonderfully inhuman, their plights somehow still manages to tug at the audience's heartstrings. I'm not a cryer, but this webtoon definitely made me tear up a few times.

Of course, if you're expecting this series to be about Philippa and Colin, well, it's not, really. It focuses on those two the most (especially in season 1), but it's primarily about the witches themselves and their individual loves and how they live through human society, even as human society remain hostile to them.

It also has some really neat critiques of sexism and really leans into the feminist reclamation of witches and what they represent. Definitely an unexpected bonus! It's also not heteosexist at all, and while many of the witches fall in love with men, some are clearly in love with women, and one witch is only interested in sweets (ha).

Spoiler (mouse over to view)
And, it's a blink-and-you'll-miss-it moment, but Colin has reincarnated into women before, and Philippa still loved him in the same way, so these witches definitely don't seem to take too much stock in gender. Or, at least, Philippa doesn't.

So, yeah, definitely worth a read, particularly if you're interested in tragic yet beautiful stories. ...There are some happy endings for some of these witches and their loves, but even those are kind of marred by... the inhuman immortality of the witches. So even with the happiness, there's always a tint of tragedy running through them, but that's what makes this series so worthwhile, I think.
Was this comment useful?  Yes

Typical good ending for a tragedy
by sammybunny40
April 10th, 2020, 4:46am
Rating: 8.0  / 10.0
It ends on a hopeful note very abruptly. Worth a read, you even get a story of every witches love life and their happy(?) bittersweet ending
Was this comment useful?  Yes

Wanderful
by rayssa-jp
August 4th, 2019, 5:17pm
Rating: 10.0  / 10.0
I truly wasn't prepared for what I was about to read, but loved it so much. Each of the history it's good on it's on way. And the way they interect with each other it's subtle and marvelous.
Just loved it
Was this comment useful?  Yes

I did expect tragedy but NOT TO THIS EXTEND

And...while it is frustrating that only some ended up with a happily ever after, it is true that in real life someone's happiness is someone else's misery.

I love all the characters, truly. Plus, with the art style of blushing dudes.. it was pleasing on the eyes.

Last but not least, I freaking love Ian♡
Was this comment useful?  Yes

Way better than I thought!
by Marionn
August 3rd, 2019, 12:39pm
Rating: 10.0  / 10.0
This manhwa is simply amazing! I never thought i would love it that much before i started reading it. It's been a long time that i read good love stories like these.
Beautiful drawing, good story-line & interesting characters!!!
This is definitely a must-read!
Was this comment useful?  Yes

Not worth the read
by GruntZone360
July 27th, 2019, 2:34pm
Rating: 3.0  / 10.0
If you're the type of person that likes the main story being delayed for side character's story/ characters that only show up a little to get their romance on then this is the story for YoUu! *sigh
Spoiler (mouse over to view)
The main story is only like 20 or so chapters and the rest is just side shit for witches that you don't give a fuck about... >,> I liked the one on Cordelia (the witch with blond hair & blue eyes) because she was there at the beginning... and I was curious on how her situation panned out after Philippa left...After that the story isn't worth the read until the last chapter (Except the little Shirley yuri ark) And don't get me started on how Philippa was neglected as a main character... Even if people say that she's not a main character or anything... When you start a story off with her as the main focus doesn't it seem like she's the main? and then you go off and disregard that character for over half the content/story? (Would also like to mention that the story left with a shit load of questions left unanswered... like the fuck is up with the grandma? how did they all meet... etc
(I'd like to admit that I started skimming over chapters after/around s2ch16?20? on...
Spoiler (mouse over to view)
But that's because I couldn't care less about those other witches when I felt as if the main story wasn't finished...I mean that last chapter (s2ch30) just shows Philippa walking up to our main man like it's nothing... Why the fuck did it take her a shit load of years to come back???
The main story felt as if it was a good 10/10 until the writer/editor/publisher idc who had to extend the story uselessly and then gave us that kind of ending...

...
by Nerdygirl70
June 2nd, 2019, 12:18am
Rating: N/A
I wish I would've came here before reading it, @agartha is right, this is how you do a sad. I came in thinking it was a cute romance, but I got a sad. A really good sad, it takes a lot to make me cry and this made me soak my pillow. I cant even bring myself to finish the entire series cause there is multiple stories and the story I started on well I cant put my heart through something like that again. Now I'm gonna go sit in a corner feeling empty and drained cause its was really good and big sad
Was this comment useful?  Yes