Login to add items to your list, keep track of your progress, and rate series!
Description
This series follows the life of Sumito Kayashima. Sumito is a spoiled, wealthy yet lazy young man. Sumito doesn't work. He spends his days going to parties and frivolously spending away his wealth on antiques, books he doesn't intend to read, and other such things. His daily routine and interests are managed by his hired conversationalist/secretary Koizumi.

Sumito seems to be the quite, naive little rich boy but when night comes his innocent mask comes off to reveal a much more conniving and wanton man. 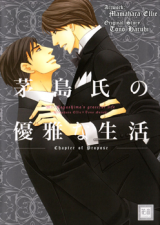 no substance
by im_uni
November 4th, 2016, 5:38pm
Rating: 6.0  / 10.0
honestly, this felt like chewing on cardboard. Not that I did that in my life, but I'm sure that if I did, it'd feel the same way. Well, it matches the name - "everyday life", but this peaceful existence with almost no hitches is not something I'm looking for in my manga. So yeah, if you want to read about, pretty much, nothing, you can grab this. No sexual appeal, nothing to be interested in, just... something, A lot of 'meh'.
To clarify: I hate stupid twists that have notes saying 'It's a twist!' all over them. What I really like are the heroes that interest me - in that case they can do whatever, I'd still be interested in watching them and their thought process. So, to sum it all up: the heroes in this manga were not interesting to me, and, seeing as there's almost no plot, it all felt really boring.

Beautifully written
by timenchips
January 10th, 2015, 2:23am
Rating: 10.0  / 10.0
I love the way this story unfolded. The style it was written in, as well as the narrator's voice were the selling points for me. I also really liked Sumito. He's such a fascinating character. And his personality's just so loveable. It also lacks melodrama, which is always a plus in my book. This is definitely one that relied on the storytelling rather than on actual plot twists/devices, which is such a rarity in manga. That's why you'll find the atmosphere and tone more calm and natural. It flows really, really well. I loved it.

Best Uke Ever!
by Ginny
August 7th, 2014, 5:26am
Rating: 9.5  / 10.0
Sumito is not my fave uke, but he's definitely in my top 3! This is not one of my fave yaoi because plot flaws, and I do not feel that the seme is good enough for the uke (a rarity for me, but happens). He just didn't seem as crazed as Sumito. I could tell he loves him, but I feel like he did not go through the whole change like most tsundere seme. Well Sumito is not a conventional uke, but I think he could've been better. I had high expectations of him. Still a good manga...very enjoyable read.

Tranquil, natural, beautiful!
by yeonpromo
July 28th, 2013, 12:48am
Rating: 9.0  / 10.0
A few pages into this manga, I had my doubts, but I'm glad that I stuck through the first couple chapters: I actually really loved this. It's definitely not dynamic or exciting, but I found myself reading it late at night and it just gave off this feeling of calmness and, ultimately, happiness. It was one of those mangas where I just ended up liking the characters so much that I derived happiness from their happiness. Sumito is a really interesting character too, who I feel opened up quite a bit since the beginning when he didn't even speak in complete sentences... I really enjoyed reading about him.

The relationship between Sumito and the gardener (who, curiously enough, was never named) evolved slowly and naturally, like watching a real love take root and flower. It actually warmed my heart toward the end when the gardener came to genuinely care for Sumito. The two of them would talk about irrelevant things, and kiss each other just because: not because it led into a sex scene, not because it was part of the plot. Just because. Things like that just made the manga feel intimate and real.

All in all, highly recommended. The art is not my favorite, but I definitely appreciated its beauty and elegance; I feel like it was perfect for the ideas the mangaka was trying to convey. It's very simple and clean.

Kayashimashi no Yuuga na Seikatsu is definitely not exciting, and it might seem to some passionless, but I found that the passion is just a quiet type. It's a love that unfolds page by page and leaves the reader feeling like they caught a glimpse of what natural love can really look like.

Flip, flip, flip...
by MightyMaeve
July 1st, 2013, 10:50am
Rating: N/A
I agree with lifeincircuit: it was flat. The art was beautiful bishounen, but I felt no sexual tension or chemistry, and the characters and their lives never came to life for me. The story felt tired by the end of the first volume! I had no desire to read any further because it was not dynamic. It's not that I mind slow stories (some of my favs are slow!), but this one was told with so little conflict, movement, and characterization, I grew disinterested.

Name.
by mixxyum
June 25th, 2013, 7:54am
Rating: N/A
I just finished this and I love it! However, that last tidbit in chapter 17 confused me. It's been a while since I've read it (waiting for that final chapter

) but was the garderner's name really not mentioned throughout this whole time??
Was this comment useful?  Yes

Good ending
by Yaoichick
June 24th, 2013, 4:35pm
Rating: N/A
Finally, a good ending. Really like the little 'mini novel' at the end from the butler's POV. I just had finished another manga and it didn't settle well on me. But this one did. yay. I really love there relationship. I thought it was funny when he face palmed himself because he forgot that it wasn't just xmas eve. Happy I picked up this read and stuck with it the whole through.

Very happy there are people out there who take there time and help translate manga for those of us who need it. :-)
Was this comment useful?  Yes

Very calm
by juls91
June 23rd, 2013, 6:25pm
Rating: N/A
But i liked it a lot. It walked on the thin line between relaxing and boring, but for me it wasn't boring, it was more calm than anything else, it was lovely and i enjoyed it till the end ^_^ . But still feels like a one time read
Was this comment useful?  Yes

Flat
by varianthart
October 9th, 2012, 7:12pm
Rating: 6.0  / 10.0
I have to be honest, I don't really love this one. It's pretty superficial feeling, like a bad daytime drama(only without much drama, just a bunch of cheesy lines). I can see how someone else might enjoy it, but I prefer stories that feel more real. The art mirrors the story in that it is pretty and steady, but without substance. It isn't the most horrible thing I've read by far, and I will give it some credit because I actually did remember most of the story after several months(after re-reading the first few chapters). Overall it was just average, but different enough to not be annoying.

A state out of time
by Kleineputchen
February 24th, 2012, 3:35pm
Rating: 8.0  / 10.0
The thing that impressed me the most was the feeling this manga gives off, as if you were invited to share a moment out of time in company with those two lovers, and has entered another world (though the story takes place nowadays). I ended up feeling a bit hanging there.

First the art. Well I have to say it's not a kind of art I really appreciate. I find too stiff and lacking sexiness, though it's getting a bit better after the firsts chapters. And I find Sumito-san too effeminate sometimes. But it's worthy enough to enjoy it while reading.

The storyline isn't that original, but the way it's described makes it original specially because of the characters. And the fact it's more focused on their relationship than their sexual life even during the sex scenes is agreable, not like any other yaoi manga. Also I like how the gardener's love blossoms slowly and naturally.

I have to say that the personality of Sumito-san is really interesting. The way he acts is really unusual and makes you feel he really lives in a different world and not only because he's rich, and that's what's attractive in him. But I would have appreciated to learn a bit more of his past, or have a bit more hints about his feelings.

Anyway, it's a very sweet story though it's not that impressive, but it's worth read it.
Was this comment useful?  Yes