Login to add items to your list, keep track of your progress, and rate series!
Description
From: Easy Going Scans

Our protagonist Jo Cheul-Hee is a delinquent who enjoys picking fights and aims to take control of his new school where he gets transferred, but what he doesn't know is that it's an all girls school.
Being the only male student there, everyone thinks he is gay! 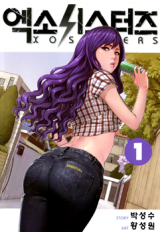 Note: You must be logged in to update information on this page.
Forum Posts Click to view the forum
Axed
over 8 years ago

Discontinued
by markcc
October 21st, 2013, 3:49pm
Rating: N/A
I too must express my frustration towards this series being discontinued, as it was about to become exiting.
It had a good start, the right speed of story development and great art. I Enjoyed reading it and in my opinion it could have been a great manga.
I really wish they would continue this...

Sad
by Stephane1200
September 5th, 2013, 9:53am
Rating: N/A
I thought it was a really good manhwa and i must say i feel guttered that they dropped it c'mon i was starting to get in the groove of things a lot by the 10th chapter plus having witnessed the latent abilities of that guy from back then i can't help but feel annoyed they discontinued it >_<
Was this comment useful?  Yes

It's not bad.
by moonlightjem
July 22nd, 2013, 11:40pm
Rating: N/A
Ok, so there was a change in direction, and people are pissed. So what? Most of these comments were written when there were fewer than 5 chapters scanlated. Anyways, the later chapters were much more interesting. I'm sad it was dropped, especially when things were really about to get interesting.
Was this comment useful?  Yes

The Summary is Misleading!
by Spearsmen620
August 9th, 2012, 3:33am
Rating: 9.0  / 10.0
I began reading this manhwa when it was first being scanlated and I have to agree with the rest of the comments that it does make a huge change after the first few chapters, and I have to say that I still love XO Sisters! I believe that readers find it misleading because of the summary. If somebody was to change the summary so that it would not be so misleading, then people would not be confused.

Nonetheless, this manhwa is still very damn good. The art is just fucking superb. Due to the HQ scans, we can really appreciate the art. It is not the most detailed art, but the art is just plain amazing. This manhwa's plot is also very well done, unlike many other supernatural-monster-hunting squad mangas/manhwas. The main protagonist does not have a harem(yet?) and is not strong yet, but in chapter 11,
Spoiler (mouse over to view)
Chul Hee was able to blast the extremely strong patient when he was scared for his life, it didn't kill the patient, but it weakened it SEVERLY. What sucks whas that he didn't even know he did that.

Anyways, I recommend this Manhwa to anybody who likes supernatural themes, a good plot, amazingly well drawn females, and a main character who is not a typical shounen lead(weak/ indecisive/ugly/short/no physique).

Why all the hatred?
by pomoli
July 26th, 2012, 3:04pm
Rating: 7.5  / 10.0
This a pretty good manhwa, but it's not about fighting, it's more like demon hunters stories, with comedy elements.
Interesting, with a less annoying than usual main char (compared to manwha standard char), but not outstanding for now...

Just like everyone said
by bull3thole
February 14th, 2012, 8:00pm
Rating: 6.0  / 10.0
The story had potential in the first two chapters in the manhwa but the plot changes completely after chapter 2.

The manhwa is going to be the typical cliche battle manhwa/manga where the portagonist has some hidden potential and all the main heroines would flock to him. It is going to be a clitche manhwa and I thought that it the martial arts/romance/comedy/school life manhwa would have been a better choice instead it becomes a supernatural manhwa. Hopefully the author keeps the plot interesting and not too confusing.

Overall i give this a 6/10 for now since there are not much to look at yet.
Was this comment useful?  Yes

It was interesting until chapter 3
by emkat
October 20th, 2011, 3:50pm
Rating: N/A
It had a good and promising plot until chapter three when the tone of the manhwa changed completely. The first two chapters had a great sense of humor, and then they go and make things supernatural. Great. It would have been better if it was a more typical high school delinquent battle manhwa.

Overall, I am pretty disappointed because of the potential it had and squandered away.
Was this comment useful?  Yes

Looks like it could be interesting
by AMetroid
October 13th, 2011, 11:30pm
Rating: 7.0  / 10.0
The Short: Dude learning to fight demons with supernatural martial arts along with his own harem.

That took me by surprise
by AsianLOL
October 9th, 2011, 1:24am
Rating: N/A
I thought this was going to be school life/romantic comedy type, but it's actually a supernatural manhwa.
It's about demon fighting, kind of like cleansing Youkai or that type in Japanese manga.
It still seems to be pretty good though. I would've rather had it keep the regular school route but I still have high hopes for this
Was this comment useful?  Yes

To those who call it misleading
by MatrixM
October 7th, 2011, 11:36pm
Rating: 8.5  / 10.0
On the very first page released [front&back cover of volume] there is a giant bug like thing. Unless you think it was a reference to that video game he was playing it should be quite clear that it would turn into a manhwa about killing those things eventually. Though I admit that it was pretty sudden. I'm mostly in it for the comedy which hasn't decreased all that much recently so it's all good.