Login to add items to your list, keep track of your progress, and rate series!
Description
From Blissful Sin:

Haruka is good-looking and popular, but quite the devil. Tokiwa is a quiet and shy loner. After their chance encounter in Katekyo!, the unlikely pair have begun dating. Though he was aware of Tokiwa’s reticence, Haruka is beginning to feel frustrated with the pace of their relationship. What will happen to the pair when Haruka begins to question his senpai’s feelings? 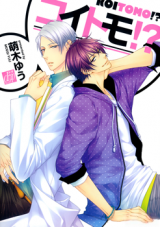 So Good!!!
by fisukisuki
January 17th, 2019, 4:49am
Rating: 10.0  / 10.0
I'm going to put it simple : almost 90% Haruka seems like the typical Sadist, but the rest shows how different he is from the typical Sadist. Like the fact that he IS still Sweet and Patient with shy Tokiwa. And Tokiwa always end up know more about Haruka's personality and still understanding. Tokiwa still think Haruka is really gentle to him, and Haruka IS Gentle to Tokiwa. Haruka just love to tease, but he hold Tokiwa preciously!
Was this comment useful?  Yes

Actually this is the only story by Moegi Yuu-sensei I could stand to finish, because the others are worse. Oblivious uke and aggressive seme are turned up to 11, plot is predictable and lazy and the devices are incredibly cheap, and all telling and no showing, which is especially bad considering it's a visual medium.

I would have preferred just looking at the raw.

Not good.
by OmNom
May 1st, 2014, 11:08am
Rating: N/A
This may be somewhat of an age thing or whatever that I have, but to put it bluntly, I really couldn't enjoy this manga. The whole set-up is just way too shallow and obvious for me, I don't even feel like there's any love involved in the story at all, despite the fact that the characters keep saying 'I love you' over and over. There's literally no room for any affection or development because everything's already spelt out and laid bare on the table.

The not-so-subtle storytelling is not the only issue though; the characters are certainly not my 'type' even from the beginning, and they just stayed like that until the end. I feel almost no sympathy towards them. And the smut is also not very sexy, despite all the explicit graphics. I get that the art is actually quite clean and easy-on-the-eye for some, but I personally don't really care much for this sort of over-polished and flat delivery. All in all, not an enjoyable experience (for me), I'm sorry to say. Though this is not the first, and I dare say not the last, time that I've had these problems with the author.
Was this comment useful?  Yes

Unique Plot
by SilentKillerLady
September 17th, 2013, 10:46pm
Rating: 9.0  / 10.0
Like this one, The uke a loner, hard to make a friend, and clumsy but he's not a total idiot.
And seme he's have a good and evil side. Who don't want to touch the uke until he want it but he's actually have a ultevor motives. And oh my he's look stupid because the uke already know it. Before he's tell the uke up.. XD
Go Hell Read It!!!
Was this comment useful?  Yes

besides the mangaka is exceptional, the design of characters is so well done and the story traps you and you want to read more and more but there isnt any ;_;
The seme is ok for that type of uke, but not my favourite. I hope he ganes more confidence for the last chapter!
Was this comment useful?  Yes

Nice
by sandyatthebeach1
May 8th, 2013, 1:39pm
Rating: 8.0  / 10.0
I really liked Moegi Yuu's Katekyo, so I wanted to read this manga, too. It's pretty good so far, and the characters are pretty unique, but I'm not so sure about the chemistry between them. I don't know, they just don't seem to click as much. I'm hoping it's just because it's the beginning, and their relationship isn't as fleshed out, yet- after all, most relationships aren't all smooth sailing, and it takes a while to understand your partner. Still, despite the (hopefully soon to be corrected) disconnect between the two characters, it's a cute read, and I'm looking forward to reading more! Not to mention the smexy scenes are very nice, and the art is pretty good, too... although for some reason, the proportions look off once in a while. It didn't occur to me at first, but I finally realized that it was because the characters' necks are sometimes really weirdly long! LOL, they look like giraffes! I know it makes the art sound bad, but it isn't, really. I actually really like her art; it's cute and consistent. Well, except for the neck thing. Haha, still, give this a try- it's nice so far, and I'm looking forward to following it.
Was this comment useful?  Yes