Login to add items to your list, keep track of your progress, and rate series!
Description
From ANN:
Kazuki Hayashizaki is a sword master who, after receiving a mysterious sign from a god-demon that uses summon magic, enters the magic department of the national knight academy. Though he was supposed to be the successor to the Hayashizaki sword technique, he begins a magic class with all girls. He will use both sword and summoning in the school battle coliseum. 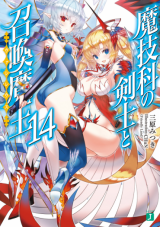 Can't stand the translation
by TheIro
February 23rd, 2016, 12:14am
Rating: 3.0  / 10.0
The current fan translation is just too hard to read. It uses too many Japanese words and the syntax is too unnatural. The pseudo-Japanese style of writing is also exasperated by a passive deadpan-like delivery. The many Japanese onomatopoeias which are either translated only with footnotes (or not at all) does not help.

Try reading the first couple of chapters, if you can stand the writing then continue. If you can't then drop it, the later chapters are pretty much the same and there's no point trudging through multiple volumes hoping it gets better like I did.
Was this comment useful?  Yes

Because his power he must make a harem?!
by postbank
February 10th, 2016, 12:53am
Rating: N/A
Basicly people say harem storys are crap because the mc and the girls have no reason to be with each other sigh.
The dude below me trys to say that this story is good because the MC has a good reason to collect girls like c0*k sleeves because of his power lolz.
The guy below needs to realise that the story is writter that way for that exact reason how freaking dumb is a power where you need to make girls fall in love with ya sigh.
Not to mention all the girls fall out of the air this story is indeed a colletion of all the others like Gakusen Toshi Asteriks, Seirei Tsukai no Kenbu, Shinmai Maou no Keiyakusha and Infinite Stratos.
But it aint the good parts but the bad parts that its using from these storys its beyond crap.
Was this comment useful?  Yes

Still better than infinite stratos... by far
by Toraemon
July 31st, 2015, 8:52am
Rating: 8.1  / 10.0
You guys have probably read stuff like Gakusen Toshi Asteriks, Seirei Tsukai no Kenbu, Shinmai Maou no Keiyakusha and Infinite Stratos. Well, Magika no Kenshi to Shoukan Maou is basically a mix of all the series above.

You get the one male in the sea of woman plot, you get the tsundere with the power related to fire heroine, you get an extra harem member per volume, and you get a sword wielding harem king protagonist to wrap it all. It's mainstream? yes. So what's the difference between this series and the other?

First thing first, you can't blame the protagonist for collecting harem member. His whole magic abilities revolve around the love level of his harem girl. The stronger the love, the stronger magic he got. The more girl he get, the more variation of magic he got. He do care for his girls and don't act like some dense idiot. He is proactive, know when to act, and not boring.

Second, there is a plot. No, seriously there is one. His enemies is competent and doesn't make the protagonist group look OP. The universe is widening little by little. And you won't get stuck reading a story where the enemies attack come whenever the school is undergoing some kind of event.(Raise both third finger towards the IS universe, please.) So yes, the story itself is actually not half bad.

All in all, it's quite a good read to pass the time. The current translator is getting his job done pretty quickly and quite well, so you won't have to wait that long for a new update. You should give it a try when you don't have anything to do. You might unexpectedly like it.
Was this comment useful?  Yes

MC MUST make a harem XD
by Trejon
June 7th, 2015, 9:08am
Rating: 10.0  / 10.0
We got our MC that it could be said to be the strongest swordman but aside from that he gets a summon which its supposed to be female only... thing is that he is the KING of the summons and he must make a harem with the other summoners and gain their powers so that he can get stronger or the summons will abandond them making the country fall... BUT like anywhere else in politics they hate the sudden appearance of a supposed king so they will do what you think a corrupt organizations will do. So our protagonist basically must gather a harem with the government against him and he must deal with the corruption at the same time.

PD: Female Summoners to use their powers get a dress with skin exposure between 50% to 80%, basically they fight in a fanservice swimsuit.