Liola—the best assassin in his world—has vowed to kill no more. He was being chased by an assassination organization when he accidentally dropped into a parallel universe: through a dimensional gate and into poor teenager Kaiser's apartment. 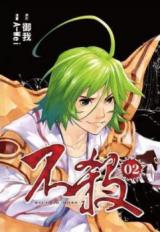 Note: You must be logged in to update information on this page.
Forum Posts Click to view the forum
Kill No More preview
over 9 years ago

Go Read the LN. Good Story. Bad Adaption.
by LittleShanks
December 14th, 2014, 2:36pm
Rating: 5.0  / 10.0
I honestly don't believe the light novel (LN) to manhua adaption process went very well for this series. The scenes that would normally work in the LN fail to translate properly in the manhua, like the beginning scene. The manhua properly shows the beginning scene from the LN, but unlike the LN, the scene in the manhua feels out of place. That, or the artist failed to properly portray it. The pacing of the manhua might make the reader feel rushed or confused because a lot of information that would normally be shown, is omitted due to it being a manhua.

The art style comes of as Shoujo (I know it's not Shoujo, and that it's Chinese), which doesn't really work out well for the type of Shounen action scenes the manhua is trying to portray. A cleaner and crisper art style would suit it better. Another criticism is how badly the pages transition from one to another. It just seems there's a lot of content that's missed in between.

Overall I think it would be better to read the LN instead, and letting the scenes in the LN play out in your head. I think looking at the art drawn for some of the characters later down the line really killed my motivation to read any further. Actually I'll just say it. I really dislike the artist's art style for the manhua. It doesn't suit the story at all. The character actions (Ie. showing anger, displeasure, begging), and action scenes are drawn properly and somewhat represent the scene, but they aren't pleasing to look at. Compare the cover art for the LN to the art in the manhua and you'll understand what I mean. This is just my opinion, so feel free to agree or disagree.

The novel is a pretty good reason if you're looking for something solid. By solid, I mean standard scenarios, or cliches. So, there's a lot of scenarios/cliches/situations that's widely used by other novels, dramas, and whatnot. So, it's not something fantastic or amazing. It's something solid with a lot of "foolproof" ideas.

the list can go on forever and that is what the novel (and manga) is about.

Despite that, it's not that bad and pretty enjoyable. But the artwork in the manhua is not to be liking. If I read the manhua first then it would be fine. But I read the novel first. The thing with reading novels is that 99% of what is happening in the novel and the scenery is our own interpretation and imagination. The 1% are the random shots of pictures tossed in by the author or the cover of the novel. Otherwise, it's all up to how we interpret the words. I clearly interpreted the description of the characters differently and they look WAAAAY better than the manhua. Hence, I am rating the manhua at a lowly 6 out of 10, as I believe the interpretation of the artist is not bad but not as nice as what I've hope it to be.
Was this comment useful?  Yes

Surprisingly good: cliche and complex simultaneously
by Nirachu
March 22nd, 2014, 5:17am
Rating: 10.0  / 10.0
I can only really describe Kill no More as cliche in the best way possible. I'm actually not really a fan of cliches, tropes and whatnot which is why I put off KnM for so long after reading the first volume or so since it just seemed like tropes galore (cute, clumsy glasses girl; insanely powerful, calm and cool guy; uber-cheapskate). However, this series is so much more than that. The world is very well developed -- mecha, knights and magic simultanously exist in the same world (it sounds a bit like overkill but it is handled very smoothly); at the same time technology also plays a major part (eg. healing 'Maxuns'); magic is explained, not just assumed that it's just always existed. The plot, although not as focused as some of Yu Wo's other stuff (Legend of Sun Knight, No Hero) is coherent and still ties up loose ends. Seemingly insignificant details are worked into the story at later parts, which makes for a detailed, surprisingly complex reading experience.

What is really cool though, is the dynamic interaction between the characters. It's not a story about one character becoming super powerful and reaching their goals; it's about characters working together with one another and developing as a result of that, which is why I think the characters are so interesting to read about even though their individual characterisation might seem cliche.

)
Edit: The lightnovel is already up to vol.8 at this point, far further than the manga. You can read it at Japtem.