Login to add items to your list, keep track of your progress, and rate series!
Description
1) Trigger
Sawada owes a lot to Kagami, the yakuza that picked him up off the street, but hearing a shocking secret about Kagami changes Sawada's feelings for him. He's also been given an important job involving Kagami...

2) Steal Me
A beautiful young thief stealing information finds himself at the mercy of the owner of the house.

3-4) Risky Bet
Iwase is a gambler determined to get revenge for his uncle's death. But getting close to his uncle's employers is harder than he thought. Professional gambler Shidou offers to help Iwasse, but he won't do it for free...

5) Me in the Palm of a Hand
Pure he... More...
1) Trigger
Sawada owes a lot to Kagami, the yakuza that picked him up off the street, but hearing a shocking secret about Kagami changes Sawada's feelings for him. He's also been given an important job involving Kagami...

2) Steal Me
A beautiful young thief stealing information finds himself at the mercy of the owner of the house.

3-4) Risky Bet
Iwase is a gambler determined to get revenge for his uncle's death. But getting close to his uncle's employers is harder than he thought. Professional gambler Shidou offers to help Iwasse, but he won't do it for free...

5) Me in the Palm of a Hand
Pure hearted Hinata loves sweet and gentle girls, but every one he's interested in is taken away by coworker and ladies man Fujimaki. Is Fujimaki deliberately bullying Hinata?

6) The Power of Glasses
Reporter Oota gets assigned to work with his friend from college Kaneko that he hasn't seen in four years. When his heart beats faster at seeing Kaneko wearing glasses, Oota knows he's in for trouble...

7) My Fair Prince
When foreign prince Julius comes to Japan for a week to sight see, he wants to go incognito. Since his (sort-of) relative Doujima works at the embassy, Julius wants Doujima to escort him. By turns pouty and childish, commanding, and sweet, Julius begins to unconciously charm the older man. But when the week's up, will Doujima be able to give up his treasured prince?

8) As You Like It
Kobayashi Tomo is hopeless at job interviews so when he fails his sixth, he doesn't know how his day can get any worse. Running into a yakuza just might do it, and before he knows what's happening Tomo is being pulled along at Suga Mitsunari's pace. But spending a whole day together? And what's going to happen when night comes... 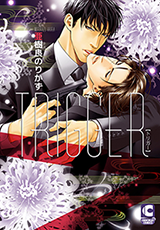 Fun collection!
by Namiya
December 27th, 2012, 12:56pm
Rating: 9.0  / 10.0
This collection of many oneshots is really fun to read.
The art is - as usual - very pretty. Her men are muscular and manly but at the same time beautiful!
I think sensei has to be one of the few mangaka who manage to make men look that pretty without making them look overly girly, feminine or strange.
The oneshots don't contain that much story but they're interesting, with fun characters and they get to the point. Every one of them is enjoyable, but the one I liked best was the two-part story of the mahjong players.
Only one thing I have to say is: the stories are all pretty cheesy! As an average boys love reader though I think you'll just end up enjoying them and smiling^^
Even if you don't think the first couple stories are that great, it gets better later on, so keep reading!
Was this comment useful?  Yes

Cute and muscly XD
by mlat26
January 29th, 2012, 7:40pm
Rating: 9.0  / 10.0
The second story was really corny >_< But the rest where ok. The love sometimes appears spontaneously so thats a minus there, on one page they hate each other and in the next they are making out and confessing their mutual love. But considering they are one-shots it's understandable.
I really like how the semes are drawn *-* so manly and buff *drools* and the ukes in most of her stories look like men, though in this manga there's always the delicate looking uke, but there's still a few manly looking ones. Again ripped semes <3 Her mangas always have super-manly-hot-ripped semes XD OMG if real life men were like that *looks around and sighs in disappointment*
Overall I liked it, what it may lack in plot it makes up for it in eye candy.
Was this comment useful?  Yes

Underrated!
by streetwalker
October 21st, 2011, 3:24pm
Rating: 10.0  / 10.0
This was one of the first yaoi mangas I've ever read and one of the reasons I kept reading. I think this manga is seriously underrated! You can't really expect complicated plots and extensive character growth from a collection of one shots, can you? I personally didn't find the ideas for the stories unoriginal and the characters were all likeable to me... The art is undoubtedly gorgeous and the men actually look like men, the ukes too, instead of little girls... Akira Norikazu's artstyle is probably my most favorite! Reading this left me feeling happy and light. So if you're looking for an epic, complex, deep as the ocean, with an intricate plot kind of manga then I suggest you look elsewhere. If, however, you want to read funny, light and sexy short stories, try this. I loved it!
Was this comment useful?  Yes

A pleasant surprise
by yumechu
September 30th, 2011, 11:21am
Rating: 6.0  / 10.0
First two chapters were quite awful if I were to be honest so I wanted to give up and find a better read. Good thing that I didn't because the other stories were really cute and fun. Sex scenes were rather boring which is why I considered them useless. Luckily, the sense of humor was making up for that. I'll most likely soon forget about and maybe read it again in a few years on another lazy evening.
Was this comment useful?  Yes

Reading this was so much fun!
by Gattaca88
August 12th, 2011, 3:57pm
Rating: 9.0  / 10.0
This stories were quick easy reads. I enjoyed the second, fifth, sixth, and eight chapter. I love oneshots like this because they don't have too much baggage and are very entertaining

The second chapter was probably one of the worst. Not in terms of art or bad sex scenes but the plot was just terrible. o_e

Different
by Sasageru
May 16th, 2011, 5:52am
Rating: 8.0  / 10.0
I had to say i enjoyed this. First, though its a collection of one shots, the stories are all quite interesting and the characters are fun and show a surprising amount of depth for such a short span of pages. Secondly, the art. I really like this art style, its unreserved and has realistic elements without going all the way. My only real disappointment with this is that they were all short stories. I would have liked most of them to have had more time and depth added.
Was this comment useful?  Yes

I Liked This...
by astroasis
December 24th, 2010, 1:01am
Rating: 8.0  / 10.0
I'll say right now that I'm not a fan of gratuitous sex scenes or girly ukes. That's probably why I'm drawn so much to Norikazu Akira's yaoi. Her ukes are manly, but still manage to be cute. Her semes are domineering without coming off like sadistic jerks (not that I mind sadistic jerks, mind you - but her semes seem much more realistic). The sex is there, but not so in your face with body fluids and squelching noises everywhere for pages on end. Also, based on this collection of one-shots and her "Beast & Feast" series, she likes yakuza / law enforcement stories - which I find lots of fun.

Now, about this collection in specific: It was really enjoyable for me. It's a great mix of themes, with some yakuza, some espionage, some gambling, some businessmen, old school friends and glasses, even royalty. A bunch of fun stuff in here. I'd recommend it for anyone who likes their yaoi to have pretty artwork and ukes who are actually men, instead of high school girls with penises

surprised... in a bad way
by lylicagalatea
November 13th, 2010, 1:58pm
Rating: 1.0  / 10.0
all the stories were stupid and unreal, the kind of D-movies love stories were virgin ukes act like women, so innocent that they are annoying, and all so sensitive!
and semes? often rapists, selfish and arrogant. not sexy at all.

good art and sex scenes (except for the overly girly ukes) but art alone doesn't make a good manga if the plots are stupid.
Was this comment useful?  Yes

It was a good story and overall read