Login to add items to your list, keep track of your progress, and rate series!
Description
The Fujisaki Girls Academy is known for their school body being composed of very proper students. The most prominent one of them is Maki, the student president who is admired by her classmates for her calm and polite demeanor. On the other hand, Kurahashi Riko is also admired but for having a very forward and boyish personality. Riko accidentally walks into Maki while she's practicing kissing with a pillow and learns that she isn’t what everyone thinks she is. Riko is forced into keeping Maki’s secret and join her in practicing all aspects of romance like holding hands and more. 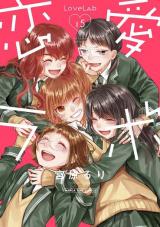 missing translated volume 13-14
by pandha
February 22nd, 2022, 11:21pm
Rating: N/A
Hey, i really hooked with this manga quite recently, and one of the scanlating groups also quite recently just posted a new translated manga for final volume and i just realized that the translators skipped the whole two volumes of the manga. Please, i really hope the current scanlating group is working on the rest of the volume. If you guys have a trouble looking for digital copy of the manga i would gladly to help, because i currently have the raw version from volume 1 to 15.
Was this comment useful?  Yes

Hilarious, Refreshing Story on Friendship and Maneuvering Through Love
by Lifelikegirl
June 21st, 2016, 7:45pm
Rating: 8.0  / 10.0
Note: Some volumes that are covered in the anime are not scanned. I had no problem reading the first volume, then watching the relatively short anime, then continuing to the fifth volume, but if you dislike anime, you are out of luck for a large chunk of plot.
To be honest, starting off reading this 4-koma comic, I was not expecting much (and as everyone says, you start to think it's shoujo-ai for a bit). I was pleasantly surprised! The facial expressions and gags are funny, the plot is light-hearted (the "love practice" is basically things like getting a guy to notice you, nothing weird/perverted), and the characters grow on you. There are hints of actual romance introduced later, but you do have to wait a little.
That small lack of romance initially and parts of the plot that dragged a bit (but not for long) are the only reasons for the 8.

Ultra Funny
by PhieX
March 3rd, 2016, 10:39am
Rating: N/A
This series is so funny! I was literaly laughing out loud for entire volumes. Honestly, I didn't expect this manga to be so funny. I was looking romance for light reading, but I don't regret it either way.

All characters are interesting. Each one has distinct personality from others. And they're all likeable and will make the reader entertained with their antics. Eventhough, the title has 'love' in it and has romance genre, I think this is more friendship between girls than romance. It's like Aria manga but funnier.

Too bad that there're some vols that hasn't translated yet. I can see why some will hesitate to read this. I personally think like that too, but then I don't know why I started reading and bammm.. I get addicted.

Light comedy for light readers
by buttplug
October 5th, 2014, 4:35pm
Rating: 8.0  / 10.0
A straightforward 4-koma with decent comedy. Initially you would be forgiven for thinking it is shoujo-ai, but male characters start appearing sometime later. Not the funniest 4-koma I've ever read (Gekkan Shoujo Nozaki-kun still takes that prize) but it is worth your time. Unfortunately it seems that not nearly all the chapters are translated yet and the ones that are, are out of order.