Login to add items to your list, keep track of your progress, and rate series!
Description
Fujimura is a loner delinquent at his school. Feared by his classmates since the first day of high school, he's had no friends and usually ditches class. But even his standoffish nature can't hold up when a class representative with a few screws loose comes after him! And two more class representatives. They're a few cards short of a full deck too. (Actually, he's more like the tsukkomi in a world of boke.) 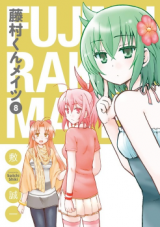 Best manga from this particular mangaka
by Seregosa
April 13th, 2019, 5:07pm
Rating: 7.0  / 10.0
It's wacky, it's random, it's light-hearted and every moment is a new gag. Not a bad time waster. Essentially just about an indecisive guy forced into a relationship with a few girls who are all completely insane in one way or another and every moment is spent retorting what they're saying and doing.

It's not really a masterpiece by any means, but it's still not bad for a few laughs here and there. This author isn't good at writing stories that you feel truly immersed into, they feel kind of hollow and empty in a way. However, it still did its job in making me laugh a bit every now and then, albeit I wouldn't call it hilarious.

I don't really like how the author repeats his gags too much and I don't appreciate the overall shallowness. The jokes are so frequent and insubstantial that it feels as if the author isn't even trying. The entire story feels quite artificial and weird even for a gag manga.

It's hard to explain this feeling.

I know I enjoyed this more when I was 16 years old. Far more. That was also a time when I had lower standards, didn't think much about anything while reading and didn't nitpick on anything. I seem to remember that I really loved this back then.

What I want to say with these words is that... this manga will probably be appreciated the most if you're a teenager. When you get over 20, especially if you read and watch copious amounts of novels/manga/anime each year, even more so if a larger part of that is dedicated to novels where you start caring about details and the story/flow, you're not really going to enjoy this that much. It's still perfectly readable to me after turning 24, but I don't really find it to be that funny or awesome anymore. It's just average or perhaps a bit above average. Worthy of reading but not much more than that.
Was this comment useful?  Yes

Made me laugh a lot
by plotrobert
May 18th, 2016, 5:35pm
Rating: 8.5  / 10.0
So I usually hate the harem genre. Mostly it means that a story just isn't going to have elements that I enjoy. That's why I'm so glad I read this series, it's genuinely funny stuff. Even besides that, I found myself getting invested in the characters way more in this series than in other similar harem stories. Even though this doesn't have the parody tag I do personally consider this a parody of your average harem story. A lot of the situations don't quite pan out like you think they're going to and nearly EVERY time I kick myself for not seeing it coming. True this isn't any sort of huge game changer of a manga but it's humorous and I find the cast extremely likable.

There's some issues that start to crop up after a while for me. The first issue is that inevitably, the comedy does start to go a bit stale. The joke is still funny but for the most part it's pretty one note, someone says something ridiculous and Fujimura reacts loudly. Around halfway through the story things start to get slightly more plot-focused, but things never really progress anyhow and most "story" chapters tend to be the duller ones.

I don't really have much more to say about this manga, it was fun throughout and I only wish the second half was as good as the first half.

Do you like tsukomi
by kiriee
May 12th, 2016, 8:56pm
Rating: 9.0  / 10.0
Fujimura mates, is manga filled with stupid character, stupid event, perverted character, and tsukkomi character. I have to say this is one of the best tsukkomi manga, each and every comeback is clever, the character is unique and good enough to make stupid comment, making sometimes normal event so ridiculous and funny.

If you don't understand/like tsukkomi then avoid this at any cost, if you like tsukkomi you're gonna enjoy your time laughing so hard.
Was this comment useful?  Yes

this is one of the best gag manga along with gintama and danshi koukousei
Was this comment useful?  Yes

hilarity and gag content
by mystichead
October 22nd, 2013, 2:32pm
Rating: 9.0  / 10.0
I generally am a harsh critic... And am not fond of overuse of cliches and unnecessary fanservice(perverted or otherwise like content/context/events/references) especially harem ecchi romances... But this had them ... Made use of them very very well without overdoing it... It never forgot its place and never attempted to Take itself more seriously than it is and deserves nor presented it that way... It is supposed to be a surreal gag manga...and that it what the the author treated it like...while also showing that something popular AND OF GOOD QUALITY while limiting the cheap stuff and overuse of it... No pretending or gimmick approaches to depth in plot or character... A shallow work but artfully shallow like Yotsubato or Cromartie (which are master class in their own right). In many times it also makes fun of the cheap plot or fan-generating/holding mechanisms utilized by authors and studios. Either doing that by having it used well placed and then directly mocking its over prevalence making things cheap...or creating an expectation of a cliche to occur(especially ecchi ones) ... And totally not delivering on it....on purpose... Its both frustrating and also very relieving to see that kind of cycle broken especially if u've read/watched/played fiction works which constantly use those mechanisms...even more especially if those kind of things frustrate you (be it all of it, specific types, or just general abuse in my case)...
There are a lot of wtf moments in this series so be prepared... Even the ending is abrupt and a wtf moment... But one thing is clear.... Its still well done and hilarious during those...
Was this comment useful?  Yes

Just Plain Hilarious with a touch of romance
by Kaitou21
August 13th, 2013, 6:06am
Rating: 9.0  / 10.0
Don't read this if you want a good harem manga (don't know why you would want that anyway) this manga is 70% gag 30% actual romance so if you plan on reading this just for harem it is suggested you find something else to read. The comedy in this manga is very funny and makes use of split second gag's to keep you laughing through the chapter's, romance is pretty good when it actually has some, good manga all around.

Edit: Wow can't believe it ended, this manga should epitomize the way harem manga should be, an unbelievably good read IMO, and this is coming from someone who hates 98% of all harem manga. Great manga all in all, perfect harem ending, and that's saying something considering nearly all harem manga/anime don't have real endings/pairings, anyone who likes harem will love this one.

Too much tsukkomi
by pseudipto
June 26th, 2013, 10:37am
Rating: N/A
I read 30 chapters in one go. It started off really funny but now it has become repetitive and a little boring because of the exactly same type of jokes in all chapters. The main character has no dimension except for a walking tsukkomi, and the manga even gets meta with that. I wish he had another aspect to his personality with him partaking in some other kind of humor.
I'll take a break from this now and come back to it later when it gets funny again.
Was this comment useful?  Yes

, Think of this as gintama meets Maison Ikkoku ... Its a really well done series even the art gives it a silly feeling.
Was this comment useful?  Yes

Perfect Gag-Manga
by silvermatthieu
May 31st, 2013, 5:29pm
Rating: N/A
Lighthearded weird jokes all the time. A bit of romance but mostly comedy - perfect to read, when your not in the mood for a deep story or live-like characters, but for wholehearted laughters.
Was this comment useful?  Yes