Login to add items to your list, keep track of your progress, and rate series!
Description
On the day Tatsuya greets his twentieth birthday alone, he meets a black cat. He feeds it on a whim and is surprised when it suddenly speaks! Before he knew it, the delinquent-like Tatsuya is transformed into a different person; someone with a pretty face!

With a body now capable of forcing a man into heat, he is suddenly attacked by a stranger! Whilst under the spell of the rampaging heat of his body, he is found by his childhood friend Kentarou, who came to celebrate his birthday with him. 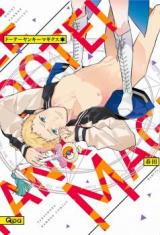 I hate it
by Kalina49
February 4th, 2022, 3:12pm
Rating: 1.0  / 10.0
The art is nice, but the whole story makes me feel like i had my brain scrambled. My heart doesn't feel better. Sometimes i really wonder how mangas like this one come about. Who thought that it would a good idea? Who came up with this idea? It's really a shame for such a good art to be used this way.
Was this comment useful?  Yes

The premise of this manga isn't inherently bad. When you think of magical girl, you tend to think of a sweet fluffy feeling, and mixing that with pheremones and heat is an interesting concept. But this manga's plot revolves around non-consent, and not just the sexual kind. Characters don't willingly become a mage, and unlike having cool super powers like other magical characters, it basically just traps them into getting raped by nearby men. Fun. None of the characters' motivations make sense. None of the characters' personalities have any substance to them, and I actually dislike all of them. I would even hesitate to say there is any comedy in this series.

More grievances:
Spoiler (mouse over to view)
Our "Luna" cat mascot? Awful! No redeeming qualities and an all around bad character. The main villain of the series? Really? His main motivation for staging a GANG RAPE is "you had sex with my brother!!" Sex that, started off in the gray area of consent, i.e. 'I guess I have to have sex with him in order to turn back to myself' which then actually turned into full blown 100% rape after he changed back into his own body? SORRY?? Oh, but the other mage redeems himself by telling him the secret to stop being a mage.... you know, after the gang rape he planned. Romance between childhood friend and main character? Non-existent. Oh my god, and then at the end, our evil "Luna" character traps some other poor boy to be raped? Talk about a "happy ending".

It's sad. I actually really like the art in this manga, but throw the whole volume out. Even if you're "okay" with rape, there's not much to like with this series.
Was this comment useful?  Yes