Login to add items to your list, keep track of your progress, and rate series!
Description
Daiki was bought by the Sasaki Group's Wakagashira Tatsumi, who then left Daiki in charge of his bar, Moderate, in order to discharge the remainder of a large debt from his parents. Daiki wants to protect the one place Tatsumi can find peace and is determined to be Tatsumi's shield if need be, but... A love story about two people who need each other more than anyone else even though neither man realizes their feelings for the other. 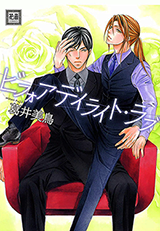 A bit weak
by mrs_choco
April 28th, 2022, 2:39am
Rating: N/A
The settings is nothing new (yakuzas and night bars) but it could be good enough but the story doesn't develop anything new or fresh and the angst is overplayed. I'm not fond of the art either, and I think characters' face are too much alike.
Was this comment useful?  Yes

There's not much but it's enjoyable
by OmNom
June 27th, 2019, 3:40am
Rating: N/A
Although this story deals with the yakuza it somehow feels less heavy than its prequel, even if there was still plenty of angst. This probably is because the characters already had their feelings towards each other established from the beginning and they truly were just "running around in circles" before being able to come to terms with their own relationship. I do think that the story is nowhere near being exceptional but it's still pretty enjoyable to me, though I may be a bit biased here since I like both of the main characters, unlike the case with the previous couple. Oh and I quite like the designs for them as well, which might have had some contribution to that too haha.
Was this comment useful?  Yes

Me likey
by hotarusasaki
October 4th, 2014, 2:39pm
Rating: 10.0  / 10.0
I like the beggining the most I'd say. They were both secretely protecting who they saw as most important and I just found that so endearing. Although sadly as the people before me have mentioned the story does go downhill somewhat...The start honestly was reeeeally cool though, loved that part!
Was this comment useful?  Yes

hmm...
by akrakat
July 3rd, 2014, 10:48pm
Rating: 6.0  / 10.0
I was actually waiting for this couple to get their own story. Finally. The ending was a bit...hanging? So I'm glad there is a sequel to this. I would consider this just a beginning of their story. Although they did get together at the end there were so many thing that is left unanswered. The plot was nice though, even if it is the typical yakuza plot.
Was this comment useful?  Yes

*Sigh*
by Akako
June 11th, 2014, 11:16am
Rating: N/A
I like yakuza a lot and after seeing Daiki and Tatsumi in After Morning Love, I was very excited about reading more of them. But... Daiki is a totally different character, he changes completely from the sharp Master to some guy who lacks self-esteem and needs a lot of time so see the obvious. Tatsumi remains cool in a sense, though he doesn't talk too much and he's more absent than present. The story has no development, I felt that nothing really changed, there was just a lack of communication that could have been resolved in 10 pages.

The art is beautiful as always, but don't expect much from the plot.
Was this comment useful?  Yes