Login to add items to your list, keep track of your progress, and rate series!
Description
From Fantasyshrine:

Under the cover of the night
In the silent harbor
Two lovers, lips sealed on each other, reunited after two long years…
True love never dies… 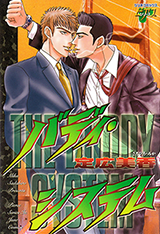 Unbalanced?
by toastmuncher
April 16th, 2017, 2:28am
Rating: N/A
Note: Please excuse me for this long message.
Honestly this manga is difficult for me to wrap my head around. Feasting with my eyes on this isn’t. That’s the easy part as Sadahiro’s smut is characteristic of this interplay between violent kinkiness and passionate and tender love making.
What bugs me is the story set up. The narrative. Every single thing, including the dialogues, that happen have as their end goal only one thing: smutty sex between the two lovers. Really. Everything builds up to this. Now, I feel great prejudice due to my upbringing and socialization of stories having sex as their end goal. I feel that there should be something more, but now I wonder why? Why privilege the latter style of storytelling over the former? What’s so despicable about sex (porn) stories?
Now, this is my problem: how much of characterization, narrative flow, and framing is required for sex (porn) stories? Or are porn stories in themselves not sufficient without an elaborate setup/background? How elaborate should the background then be? What of the dialogues? Other characters and their role? Personally, I believe that sex stories with, well, “proper” setups and flow are better than simple porn. For example, [m]Nemuri Otoko, to Koi Otoko[/m] It’s all about sex. That is the central theme, premise and plot. But there is this control over the story flow that makes it much better, and easier to comprehend, in my estimation.
That’s why while I do find it quite intriguing (and ingenious) that everything is setup so that the end is smutty sex with sprinkles of sexy scenes along the way. Still. the question stands, how well is the setup done? What kind of setup is “good” when all that matters is that there is kinky sex in the end? How do I judge this? Because if we are just talking about kinky sex with a minimal emphasis on background then this is a terrific work. But if not, if we are also looking for something else (which is what?), then I am somewhat ambivalent towards this.
There were a few points which I found extremely illuminating and “good” in regards to the thematic coherence and as possible explanations for the (over)abundance of sex scenes and focus on the phallus, without going into the genre debate. Such as their profession as policemen which posed a constant (if extremely dramatized) danger to their life. Or one of them being openly gay with a colourful past and personality.
But at the same time the setup fails on certain accounts as well. Such as their passionate love (which springs out of nowhere) for each other. Or the extremely dramatic and violently-kinky situations they find themselves in from which they (miraculously) come out psychologically and physically fine despite whatever happens. Moreover, this “misadventure”
Spoiler (mouse over to view)
such as being anally raped till you bleed but are perfectly capable of running while holding an iron pole to attack your assailant the very next second (the pun is not lost on me, tho I do wonder if it was deliberate)
then turns into a new source of pleasure for our two protagonists
Spoiler (mouse over to view)
as the seme discovers the pleasure of being the uke, and the uke (who sees the seme being raped) now wants to do the seme
.
That is why I am conflicted and feel that there is an imbalance between form and content.
Was this comment useful?  Yes

I don't know what to rate this...
by sofistree
February 12th, 2012, 1:36pm
Rating: N/A
The two main characters had some decent chemistry, but the whole thing was... There just wasn't enough characterization and a little too much sex. The sex was creative, though...

I prefer other works by this author. This one was a little bit directionless for me.
Was this comment useful?  Yes

A little too hardcore for my tastes
by Here_And_Now
August 16th, 2011, 12:46pm
Rating: 6.0  / 10.0
The sex was a little too explicit for my tastes and very frequent; but if that's what you're into I suppose it could be considered a plus. I found the seme's sporadic jealousy to be kind of annoying. Sometimes he's angry at the uke's random hookups and other times he acts like it's no big deal. I typically like more story in my yaoi. While there is a somewhat followable story here, the sex and the pair's "hot passion" (as some would perceive it, but not me) are the predominate focus of this manga.

Bottom Line: If you're into sex and a little storyline could be consider a bonus, read this. If you're like me and prefer a story with fairly inexplicit sex, it's probably best if you move on to a different manga.

one thing
by genie195
March 30th, 2011, 3:41pm
Rating: N/A
one really annoying thing about this mangaka's work is how the characters are ALWAYS having side affairs when the other isn't immediately available. Call me "old-fashioned" (not really) but I like the whole 2 people per relationship. >.> It just ticks me off, the lack of loyalty and all.
Was this comment useful?  Yes

everytime they can. but its not like other stories that all sex thing it has a nice detective thing story in it but still really really steamy.
Was this comment useful?  Yes

...
by thismomentisfate
December 17th, 2008, 8:11am
Rating: N/A
how come this authors characters always sleep around and yet their partners get jealous? if they are going to get jealous why are they with someone that sleeps around?
Was this comment useful?  Yes

Kinky but romantic at the same time
by cut
April 2nd, 2008, 4:35am
Rating: 7.5  / 10.0
Love the burning desire they have for each other ALL THE TIME. The illustrations are Very concentrated on the smex but I’m not complaining because it’s hot & deep (emotionally & otherwise xD). Plot also has a nice detective-charged feel to it & the pairing look great together.
Was this comment useful?  Yes

so hot
by blueseeker
February 2nd, 2008, 3:36am
Rating: 10.0  / 10.0
This one is quite steamy and quite dirty even in fantasies which made me fall in love...hehe. I love how the couple despite having a dangerous job are quite amorous with each other and quite lovey dovey.
Was this comment useful?  Yes