Login to add items to your list, keep track of your progress, and rate series!
Description
Isaka is secretly in love with his caretaker and former childhood friend Asahina. However, Asahina is obsessed with Isaka's father... or so it seems. 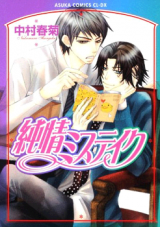 Note: You must be logged in to update information on this page.
Forum Posts Click to view the forum
Junjou Mistake Gets Anime
over 10 years ago

Isaka-san ❤️❤️❤️
by kurosu_yuuki
July 4th, 2020, 8:47pm
Rating: N/A
I don't know why I never reviewed this, but I recently reread it, so here is goes:
First, I don't get why most are reviewing this like its own story. Yeah, it's a bit rushed, but Isaka-san is a part of both Junjou Romantica and Sekaiichi Hatsukoi (so is Asahina, actually), so this was more to tie a loose end than anything. In any case, he's one of my favorite characters across Nakamura-sensei's work, so I was highly anticipating it!
They are super cute. It's not as in depth as we would all like, but rather it brushes over how their relationship has developed throughout the years, and they've been together basically all their lives and for years and years as a couple. It's really refreshing to see a couple together for so long in any yaoi series (oh, and she even threw in some angst in the beginning <3)
Also, Asahina's okay, he fits his role or whatever, but if I loved Isaka before, after reading this I loved him even more. He's so different from your typical uke that I couldn't even pinpoint him as the uke from the beginning, he could've even been the seme. He's not girly, he knows what he wants and ENJOYS sex. It's really great to see an uke that actually wants, initiates and engages in sex.
With that being said, it's also funny to me how he makes a remark about having kissed Asahina without his consent when Nakamura uses a lot of dubcon in her work (which I particularly love, but people always bitch about).
Anyways, I wish this was its own series and Isaka had 800 volumes for him like he other characters do, but at least we got something!
Was this comment useful?  Yes

Better than both of the main series, but..
by OmNom
February 28th, 2015, 3:48pm
Rating: N/A
.. that's not saying a lot tbh. I've always had a thing for unrequited love, so this manga's first couple of chapters really connected with me. Sadly I wasn't too thrilled with the story's progression; if only it wasn't so conveniently resolved, although I suppose it's not actually too bad, I was just a bit let down with things not going according to my preference, is all. This is one of the few times I've come across an uke from Nakamura Shungiku that I don't hate, so gotta give props to that. Overall this manga is a rather pleasant surprise from the mangaka; I had completely given up on trying to find something decent from her and this is definitely an improvement from the rest of her works, though still not enough to become great.
Was this comment useful?  Yes

i sooo love this series next to Junjou romantica
by yuri_shibuya
November 14th, 2013, 9:34am
Rating: 10.0  / 10.0
It really struck me when Isaka-san said this line "I will never really get that which I really want".
There is some point in our life that we will feel this way.
I really like the language of flowers conveyed in this series.
Nakamura sensei is my idol in making this heart of mine flutter.
Was this comment useful?  Yes

Short but Awesome
by sofistree
May 13th, 2012, 12:01am
Rating: 10.0  / 10.0
This is one of my favorite couples by this author. They're lot different from the usual from this mangaka, and while I love her other couples too, this one is refreshing.

Isaka is strong and knows what he wants and it a bit crazy. He's not the usual blushing uke - if he wants to have sex, he goes for it and doesn't try to hide or be shy even ten years into the relationship (unlike some of the others by this author).

They complement each other well, and they have a very cute back story.

It's very good. I'd recommend it if you like characters who aren't stupid or weak.

Super-Eggagerated Delight!
by MightyMaeve
November 27th, 2009, 2:52am
Rating: 9.0  / 10.0
There is something about Nakamura-sensei's elongated and super-deformed characters that bespeaks powerfully of whatever human emotion she is trying to express! It's amazing.

This story has her trade-mark wildly overreacting, angsty, and self-recriminating uke and calm, composed but deeply feeling seme. She always manages to make me fall in love with each and every one of her little stories.

I like her style of close-ups and few panels on each page. Her style is drama, drama, drama, but not the humourous type like Araya Miki. She really has a quirky way of creating characters through both her stories and her art that I can't help falling in love with and caring about their lives.

As Vkoi mentions, the intimacy scene is short. It is hot, but short. Thankfully, Junjou Mistake is part of a large canon, so there is plenty more to be found of this particular universe and heaps of fans equals fanfictions to flesh out the intimacy brevity problem of this one.

DP did a fabulously professional job.
Was this comment useful?  Yes

It's a mystery
by vkoi
September 13th, 2009, 2:35am
Rating: 8.0  / 10.0
I honestly can't say why, but I liked this. The art's not what I usually enjoy, but it's distinctive, and I wound up liking it. The plot's not tied together very tightly - why is young Asahina perpetually in bandages- and the emotions fly all over the place without developing much depth, but it's charming. There's only one sex scene which gets truncated before it has a chance to get really hot, but that's ok. Wait, really? I just don't know. It's somehow a really cute little story.
Was this comment useful?  Yes