Login to add items to your list, keep track of your progress, and rate series!
Description
The famous Gundam series marked top rankings in popularity for a long time. What was the secret? How was Gundam born? What’s the story behind Gundam? For the first time ever, we take a step out of the actual Gundam plotline, and we turn the perspective towards the production of Gundam; how it became a major hit surpassing its predecessor, Japanese Battleship Yamato!

This story is fictional, but the names of the characters are real, including the voice actors and director. 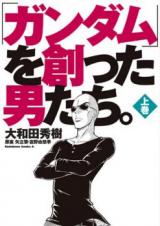 It's a niche series
by auriga
April 10th, 2011, 7:31am
Rating: 8.5  / 10.0
As a Gundam fan I found this series enjoyable. Of course this is a fictionalized account of Gundam/Sunrise history - and an exaggerated one, at that - but it was still nice to know the people and events behind the huge franchise that it is today.

It is a niche series like others before me have said. This is most definitely targeted at fans who have some idea of who Tomino, Yasuhiko, Okawara, Itano et al are. So there, it isn't for everyone. So yeah, Gundam fans welcome. Not a fan? We don't discriminate, but you've been warned.

@That2ndGuy: Wow, way to ad hominem! I haven't been around here for quite some time, but this is the first time I came across someone being insulted for their English here. Listen, not everyone is good at English like you. Not everyone has English as their native language. How hard is it to respect that?

And it isn't as if nugro's English is the worst I've (or you've, I'm sure) encountered. It's actually pretty decent.
Was this comment useful?  Yes

Wow, lame
by That2ndGuy
January 14th, 2011, 3:29pm
Rating: N/A
This, like Gundam, is just a lame series. I thought maybe I'd be able to open up to the series if I knew the history (if you want to call it that). I was wrong. I guess if you don't like Gundam, pass this series up. I'd go on, but takitogr pretty much covered it all, including other people's ignorance.
@nugro- Please learns to English before criticisms toward other peoples, yes.?
Was this comment useful?  Yes

These days I don't know how people rate manga anymore, sure there are quirk here and there but goddamit manga is meant to entertain. Hell this one is categorized as comedy, and it does this job god damn well while maintaining a believable history.

I don't care if there are some stupid aspect (define) as long as it isn't obstructing like a sore stick. Everyone act like a professional critic yet do the job half-assed in pointing the mistake which is dumb.
Was this comment useful?  Yes

to think that someone would call it perfect is beyond me...but i've read all 10 chapters and i'll continue reading it...it's interesting because of the theme but the execution is terrible and amateurish in al aspects...

edit:lost interest in that title...stopped reading after 19 chapters...it is really bad and without any value...i thought i would get some insight but this is just over-exaggerated and idiotic

@nugro:
-yes, i said the theme (the idea) is interesting and that's y i'm still reading it....it could have been something good but the execution is terrible...so y does it seem weird that i keep reading it..it still hasn't made me want to quit it..ppl read and watch stuff which are not very good all the time
-the history is believable? more like ridiculous and unrealistic
-i didn't want to waste my time proving my points on something dumb...
-you just read it and it's obvious
-if you think that it's great then that's fine with me...the opposite scenario is obviously not fine with you
-it was just a short rant/warning to ppl that this title is not good which is certainly not...
-where exactly did i act like a professional critic?..surprise! thats y this space is here! for people to state their opinions! opposing or not! ur more of a critic than me cuz u criticize me as well as the manga..it's only because i don't like something you do like and you did a half-assed job yourself proving why it's good, as well as the guy below me so that proves my point..you didn't flame him for doing a half-assed job...you should think better before you write something
-btw have you noticed that this is the comment section?...i didn't write a review! just a simple comment...i can write whatever and however short i want...i don't need to write a thesis on gundam sousei just to prove my point to you!...you yourself didn't prove any points

what kind of logic is that... you don't even know what you're talking about...

Surprisingly good!
by fabreeze
December 18th, 2009, 9:15pm
Rating: 10.0  / 10.0
This series isn't about giant robots at all, but rather the trials and tribulations Yoshiyuki Tomino faced trying to keep the television series Mobile Suit Gundam afloat, in an era where quality drama and character development were not the norm for robot cartoon genre.
Was this comment useful?  Yes