Login to add items to your list, keep track of your progress, and rate series!
Description
An ongoing series revolving around Atsuya, who is an "Unrequited Love Maniac" and the loves of his life. 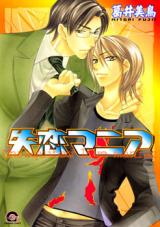 not my thing
by paputsza
July 9th, 2014, 10:36am
Rating: N/A
I'm squicked a lot in this manga. It's way more drama than comedy. It has houseboys, and I couldn't come to like any of the characters. There's a guy who cheats, with an idiot who likes him, a background character who lackadaisically pursues the fickle protagonist. Then there's this guy who slept with his stepfather when his stepmother was in the hospital. None of this has any sort of real explanation other than "I felt like it so I did it and everything's coming up swell", One of my least favorite mangas.
Was this comment useful?  Yes

So dissapointed!!
by akrakat
July 3rd, 2014, 10:35pm
Rating: 2.0  / 10.0
I had such high hopes for this series. But this is the first time that I hated all pairings in a series. Sometimes if I don't like the main couple I could count on all the sides couple that will eventually have a great story. But I don't even have that. The one couple that have potential, gone when he went and go with someone that's supposed to be a father. Seriously..I kept reading in the hopes that Ryuu dumps the old man and get together with Kawanabe. This series is a serious disappointment for me form Fujii Mitori
Was this comment useful?  Yes

hahaha XD
by angelmana
July 29th, 2013, 3:13pm
Rating: N/A
@ mtmt1311
Just laughed my ass of after reading your comment
I love this manga but it is kinda true what u wrote.
Thanks for making my day XD
Was this comment useful?  Yes

Eh
by varianthart
July 8th, 2013, 12:11am
Rating: 5.0  / 10.0
I don't think this is the worst thing ever, but it is firmly average. It is mostly just melodrama and people in crappy or straight up screwed up relationships. The age difference with one of them also creeps me out(because he mostly seems to bring young boys home and then take advantage of them...and then we are expected to cheer for their relationship?). Like the last two commenters, I was also fond of Ryuu and disappointed by how his character developed. It was really just brainless, like no thought was put in to it at all. Ah well. With all that said, it's still pretty much average. That isn't saying much when it comes to yaoi, but I've read much worse.
Was this comment useful?  Yes

I'm rather dissapointed
by Lilyanna08
April 23rd, 2013, 2:32pm
Rating: N/A
It happens really rarely that everything in plot in which I can see potential goes wrong . I can totally agree with mtmt1311 ( previous comment) especially when it comes to the part about Ryuu. Definitely the most interesting character with the greatest potential - which ends up not being used at all. This last disappointment left me with bad aftertaste , and I was even promising myself to forget about all previous slips of the plot if only that one last precious gem was well-executed ....

However I'm sure there are some people who will like it so give it a try and decide whether you agree with us xD.
Was this comment useful?  Yes

Bad
by mtmt1311
March 9th, 2013, 7:14pm
Rating: 1.0  / 10.0
Despite all the positive comments, I found this manga unbearable. Spoilers throughout.
I got so pissed at the first two chapters. This is the first time that I see the uke dumped the seme for cheating (to test the uke's feeling?). I was so happy, then this brat comes around, blindly declares love and tells the world this unhealthy self-proclaimed relationship is the best thing ever, making the main character look bad.
And whats kind of man give his new lover to his ex to take care of and what kind of brat just rub their new relationship to his lover's ex? They are both douchebags that deserve a slap in the face.
Atsuya fell in love so easily, he fell in love with a new guy in each chapter. The one hes with for the longest is the one he fell in love with the fastest. But his attachment for 3 guys at the same time pissse me off. I felt that he only ends up with Yamazaki just because he is in love with him and feeds him cheesy lines, unlike the other two.
I can actually enjoy the story after those two annoying guys (Nakura and the brat) get the hell out of the stories and the stories just focus on Atsuki and Yamazaki. But they kept coming back, ruining the mood and making me skip chapters.
Finally, my favorite character, Ryuu. Hes rather a strong and serious character. I was expect him to end up with a devoting, and funny seme to balance it out but no. He ends up with a old-middle aged pervert who banged his adopted son while his wife was dying at the hospital (whats exactly is the moral of this story?). Then they decided to themselves that she forgave them. Oh please, not like she can wake up from her grave and tell you how sick you both are. And that old man decided to kept him as some kind of love pet. Here comes the personality change and we see nothing of the strong Ryuu. Hello typical uke that whines and cries during sex. The mangaka just have to add the melodrama in his story.
Conclusion: Total waste of time.

The sex scenes
by supmaguire
October 1st, 2012, 3:29am
Rating: 9.0  / 10.0
are so good. And not in the smutty way--get yo' mind outta the gutter--but in the sense that they're touching and at times poignant. They can be hopeless, or very fully of love and affection. It's the kind of stuff that makes you squeal, "awwww," and leave you wishing that you had someone to love that loved you back

On another note, I pray to God, Jesus, and Buddha that another scanlator will pick this up again--the original scanlators aren't active anymore *pain*

Love this manga
by OceanMist
June 24th, 2012, 8:24pm
Rating: 10.0  / 10.0
Seriously, this manga got me real deep. I can't even describe what I felt. I really like the characters. There were some down and ups in this manga but it was worth the heart ache and time. I'm hoping to read more of this manga and hope it get picked up by other scan groups since it seems, according to most of the comments here, the group disbanded TT_TT I really LOVE this manga and mangaka so I hope to see more from this x) but I'm surprised that... it's been since 2004.. I can only hope ;_;
Was this comment useful?  Yes

I really like this manga, especially Atsuya is just too cute. At first, he's being so stubborn but as his relationship with Yamasaki progresses, Atsuya became more tame(?) and very cute>w<

). I miss it and I expect more volume of this manga to be translated. I just hope that another group would pick up and continue translating :[
Was this comment useful?  Yes