Login to add items to your list, keep track of your progress, and rate series!
Description
Inui Takeshi is the owner of a restaurant in trouble! He and his cute younger brother Yasutomo are trying to make a living, but business is just too slow. When regular customer and ex-host Ookami Kyousuke suggests an all-male version of a maid cafe, the brothers reluctantly agree to the idea. Ookami and fellow host Sannoumaru Miyabi move in with the Inui's and begin the adventures of Cafe Relish! 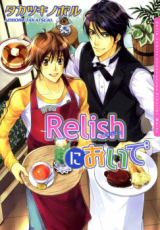 Mediocre
by JHax9999
March 1st, 2019, 11:04am
Rating: 4.0  / 10.0
No chemistry between the characters. No actual story to invest in. The plot is fluffy, boring, and meaningless. The uke overreacts to everything and behaves like a stupid tween girl. The seme always has a bland, robotic smile on his face. He doesn't react during sex scenes, which are lame as hell. He doesn't have flaws or display emotions. These people really have no discernable personality. This manga is thoroughly average and bland in every way... except the art, which looks nice. But without any substance, all that pretty art is just a waste. I do not recommend this manga.

Very Cute
by Nyokichan
July 21st, 2012, 11:38am
Rating: 10.0  / 10.0
I would have loved to see what happens with his older brother. Especially when he finds out Ookami is breaking his promise. There should have been a sequel. Otherwise it was a cute manga especially for those who like cafe themed stuff.
Was this comment useful?  Yes

That's all??
by Poemi
October 30th, 2011, 10:14pm
Rating: 9.0  / 10.0
This was cute and funny, with a little bit of angst mixed in. I thought the setting was different from other manga I've read, so that was refreshing. It has very nice art, the characters are likeable, but it seemed to end abruptly. I think it needed to be longer for more character development, fluffiness, and/or SMEX.

Cyte read.
by Dizzy_O_Desi
August 8th, 2011, 11:12am
Rating: N/A
I thought it was a great read, though i really wish there was more. Usually when a cafe is involved we would get to see other relationships form and in the extra we get to see just that but seeing as there is no vol 2 it wasn't expanded on though I thought that would have been a great way to start vol 2.

So all in all nice art and a cute story line.
Was this comment useful?  Yes

What is this...?
by whitenette
March 27th, 2011, 3:20am
Rating: 3.0  / 10.0
It started out fine. Then all of it just went down the drain.
The actual plotline allowed for much more development. Not only did the plot rushed to the very much cliche end, the characters were not consistent. The bed-scene was the worst. No emotions felt at all, contrary to what I had hoped for when this manga had a good opening.
The art is safe and very standard of Takatsuki Noboru. Cute. But lacks emotions, or gives out cliche expressions. I felt some panels were disconnected and drawn from a wrong angle.
It's best to read up to chapter 3, then come up with the rest yourselve. An average person can come up with a better resolution than this horrible ending.
Was this comment useful?  Yes

darn, no second volume?
by pleochroic
March 13th, 2011, 5:26am
Rating: 7.8  / 10.0
this is cute and pleasant fluff with really lovely art. very pretty digital colour art as well. i don't know how realistic it is; *snicker*; somehow i don't see it. but it doesn't matter. there is enough space here to do a little character development, but i want to see more of that. love the otaku injokes, and that kyousuke reads daria, *snicker* (the manga was serialized in daria). the sex scenes are a little weird and not a turn-on to me because naked yasutomo is drawn very young, and while this isn't shota, his tiny, cute pecker makes me think of shota. but the kid is cool, and i am really more interested in his personality than in his sex with kyousuke. the whole cast is fun, and i definitely would like to see more.
Was this comment useful?  Yes

Café Relish ni Oide
by angelkurisutin
February 15th, 2011, 6:58pm
Rating: 8.0  / 10.0
This was an ok manga. It was cute, and I loved the art, but nothing about the characters or story especially stood out to me. I kind of felt like there were too many characters introduced for a one volume manga. I wish it was spanned out over several volumes so that the readers could see what ended up happening to the other characters. Some stories and relationships started to build up only to have nothing come of them. But overall it was a pleasant read.
Was this comment useful?  Yes

:3
by Sakura_Hikizaki
September 17th, 2009, 1:39pm
Rating: 10.0  / 10.0
I love this series so far. I'm a HUGE fan her works now. It's too bad there aren't alot of her work around. This one is very cute and funny. I love it the Cosplay theme. Yasutomo and Ookami are soo cute! The manga ka men are HOTTT. Lovely story XD
Was this comment useful?  Yes

wonderful story
by nanichan
July 19th, 2009, 1:53pm
Rating: N/A
I'm so relieved that theyre arent any rampant sex scenes in the story so far! Most yaoi stories become plotless and distasteful really quickly, but this hasn't. It very realistic and full-filling.
Was this comment useful?  Yes