Login to add items to your list, keep track of your progress, and rate series!
Description
After saving one world, warrior Minsu Kim returns to Earth only to find that he’s lost everything... so he decides to destroy the world he used to call home. In his rampage, he kills teenager Jeongsu Park and his family. But instead of dying normally, Jeongsu is transported to another world, where he finds that he's now a warrior himself. After killing the demon king of this alternate world and honing his skills as a warrior, Jeongsu returns to earth, hell-bent on revenge against Minsu. As the two warriors fight with the fate of their country in the balance, who will emerge victorious?

Ori... More...
After saving one world, warrior Minsu Kim returns to Earth only to find that he’s lost everything... so he decides to destroy the world he used to call home. In his rampage, he kills teenager Jeongsu Park and his family. But instead of dying normally, Jeongsu is transported to another world, where he finds that he's now a warrior himself. After killing the demon king of this alternate world and honing his skills as a warrior, Jeongsu returns to earth, hell-bent on revenge against Minsu. As the two warriors fight with the fate of their country in the balance, who will emerge victorious? 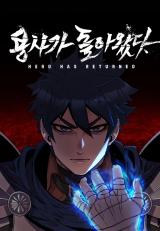 
Category Recommendations
I Played the Role of a Hated Hero, but for Some Reason I'm Loved by the Last Boss and Living With Her!
The Husky and His White Cat Shizun (Novel)
Warrior Executioner
Kikanshita Yuusha no Gojitsudan
Ex-Hero Candidate's, Who Turned Out To Be A Cheat From Lv2, Laid-back Life In Another World (Novel)

Stupid story development
by sakura1083
January 29th, 2022, 6:12am
Rating: N/A
This is an interesting premise developed in all the wrong ways. What seemed at first an original twist on the isekai genre, portraying the cruel reality of a stranded hero with nothing to return to, quickly turned into the stupidest plot ever. Motivations are too dumb and we’re eventually faced with a nearly mass production of “returned heroes” that has been happening throughout history, rendering pointless the initial premise.
This is the kind of story that makes you wish there was a zero or a negative rating.
Was this comment useful?  Yes

Even though the premise is revenge driven, I don't think it'll be the main theme. It'll probably go about pitting different themed heroes against each other while slowly unravelling what's happening and a bit of their backstory (I like how they show some key scenes and don't drag them out).

Up to now there has been lots of action and in a quite well drawn unique style. I dislike a bit the tints of nationalism exaltation the author throws with the navy and secret service ,but this was probably a contraposition to other series which inspired this one was (Korean series usually tend to dehumanise all the bad guys and anything related to the government) so its quite refreshing that this one doesn't.

The lance hero ¿MC? is a bit dumb (I guess it's just the author not grasping some simple reasoning the characters should make in these extreme circumstances or how most people have different reactions to fear) ,for example killing the first hero he sees without planning much, but all this stays on normal levels, considering there's a hero that can travel in time, he's probably set things up on his favour and other crazy influences that could be introduced later (this series is just starting).

the villain protagonist has the mentality and maturity of a giant baby
by holydemon
December 4th, 2021, 8:11pm
Rating: 1.0  / 10.0
He lashed out on the world by massacring innoncent people because he lost his mommy and daddy, who was killed by
Spoiler (mouse over to view)
his time-reversing deus-ex machina of an ally
and because life is too hard and people didn't want to help him, even though he has superpowers and has far more options than anybody else.

I continue to read this silly charade just to see his stupid face at the end when things are revealed to him.

R u serious
by sloez
October 11th, 2021, 7:05am
Rating: N/A
I thought we were finna have an actual revenge series thing but I guess TF not
Was this comment useful?  Yes

It is fun and justified to see people kill others... so long as it does not involve me, my family(probably).
by Ams
September 7th, 2021, 5:08am
Rating: 1.0  / 10.0
What happened to SH family is sad. It is depressing. Yet, that does not give him the right to take other's happiness. Other uninvolved people. However, it seems a LOT of people agree, sympathize, support and even justify his actions.
He could like a normal person, ask for help. Family and friends are not the only place to ask for help.

Basically, following the rationale given by the SH supports I cam eto the conclsion of the type of people we should support; and I mean support all their actions regardless of any harm to others.
(1)Let us start with Bullies. We should support them, and even encourage them so that they keep on making life miserable for others, before killing them.
(2) Terrorists- because they have big weapons.
(3) People who no longer have any one in their life due to unforeseen accidents( eg- natural disasters).
Let me be clear, following rationale provided by the SH and his supporters; for (3) we should allow, and even encourage them to kill every single being alive. That includes the supporters and their family too, probably. They are not to be provided help or counselling, weapons and a killing spree is the answer. All should be according to what their guide the SH said- if I'm sad then everyone else should be sad too.
Was this comment useful?  Yes

Wasted artist on this garbage
by cougar101
August 29th, 2021, 4:03pm
Rating: 1.0  / 10.0
this is what happens when a psychopath became magaka.. mass murder just cuz he's sad XD
on top of that the crazy amount of plagiarism
The only good thing here is the art but that can't save this trash
Was this comment useful?  Yes

Makes no sense...
by Helbrassen
June 8th, 2021, 3:43pm
Rating: 1.0  / 10.0
The mangas characters are completely unmotivated to commit the acts they do, everyone is just a psychopath and kills everyone for fun... If a mangas character have no rime or reason for their actions other than "im evil now" then why would the reader become emotionally invested. This manga is extremely boring since it's story is subpar at best because its completely unrealistic in how people act in the real world...

Lets say i was Isekaied, i spend 8 months fighting and subsequently killing the demon lord, i then get to go back home. Now imagine once i get back home 8 months have past and my parents have died because of either accidents or deep depression of losing their child resulting in suicide, the rest of my family hates me and i feel abandoned, do i -A- try to cut out a new life for myself seeking meaning and an escape from my depression with my incredible powers that i still have, effectively build a new life... or do i -B- kill everyone around me (millions of innocent people) because "if i'm sad then everyone else should be sad to"... if you chose B then this manga is for you...