Login to add items to your list, keep track of your progress, and rate series!
Description
A man who playing a game in Japan, dies of cardiac arrest. In the brink of death, he was requested a favor by the Goddess of eroge he was playing [After defeating The Great Demonic Lord, please save the world from the tyranny of the hero] to save the world. With his knowledge of the current era, and his summoning arts, this is a story of a man who steals the heroines of the hero.
The villain reincarnates, tries his best on domestic affairs, research cheat, and captures the heroine.


Associated Names
Conquering Hero's Heroines (Novel)
So Anyways, I'm a Rich Boy from a Noble Family, and I Need to Steal the Hero's Women for the Sake of World Peace (Novel)
Stealing Hero's Lovers (Novel)
貴族のお坊ちゃんだけど、世界平和のために勇者のヒロインを奪います 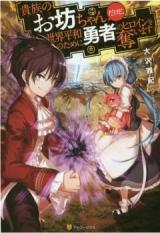 interesting
by aznluck
August 14th, 2016, 8:43pm
Rating: N/A
If you read the "Prologue" and "chapter 1", than that a better summary of the whole novel then the simple version summary from the author.

I going to expand the explanation of the author's summary for people who have yet to read the novel or the recommend chapters from the early above sentence.

Here how the goddess explain to our MC; Hero and his harem (Heroines) save the world from a demon king. Happy ending? wrong. Hero become king while his Heroines become queens afterward. If you asking what the problem then? The problem is that their (hero and heroine) self-righteous and selfish governing cause a political and economic collapse which in turn made the world into chaotic and unruly place. And yes they go off killing people who they (hero and heroine) believe are the "bad guy" such as the rich and the moneymaking people and etc. Now what you think will happen to a country when you kill off the well educated or the know how people? Half of the collapse is cause by the Heroines selfish action while the other is by the Hero himself with the same thing. Our MC's task by the goddess is to prevent that from happening, the collapse of the world.

Which bring us to the current setting, our MC reborn in the new world with the start of "chapter 1" as 13 years old (he already live in the new world that long but the chapter start from there) in the timeline before the hero become a hero and before where the hero's heroines become heroines.
The MC's task is to captures the hero's heroines (heart) and teach them the fundamental of making money (economic) before they might turn into the hero's |31cth that do selfish action in the future.

Spoiler (mouse over to view)
If you wondering, there are 6 official hero's heroines in total

The author took down the web novel version on 8/31/16 because it going novel. Here are some archive link when it uses to be.

So far, including translated chapters and google translated raw there are NO NTR or SEX. However there a few time where they speak, show, or present sex related stuff or items.