Login to add items to your list, keep track of your progress, and rate series!
Description
Kohinata Ayumi is about to go on a date with her boyfriend Shiro, but then she gets a mysterious call from one of her classmates!

Suddenly, she wakes up in someone else's body!? 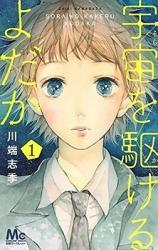 Ever get that feeling when you're sad because you're not gonna find another as good for a while? This is it. Loved it.
by flowinmyboat
May 10th, 2022, 5:34pm
Rating: 10.0  / 10.0
I loved this. Umine was so fucking annoying, even after she got what she wanted. Ayumi's spirit was so sweet -- it's a little idealistic in saying that a good attitude and kindness will make everyone love you but hell, it's 99% right. Umine's problem wasn't that she was ugly or fat or anything -- it was that she was bitter and angry and didn't try to make the best of it. Like when she says: "They don't understand the pain I've had to suffer since they have good looks by nature." -- like oh, boo-f*cking-hoo, baby. Go cry a river -- not all of us are gorgeous, it's not just you. Also...it's not their fault other people are bullies and society sucks. In reality, in the context of this story, Ayumi incredibly nice to Umine (even considering all that's happened) so Umine is punishing the person who deserves it the LEAST.

Don't get me wrong: I get why Umine is the way she is so I feel sympathetic to why she did what she did and why she was desperate to not have things change back. The poor thing was treated so poorly by so many people to the point she couldn't see what she did have going for her and her own good points. BUT I just thought she was SO mean-spirited at some points...like damn, bih, you're not even gonna let Ayumi make the best of it? She's just gotta suffer. Okay then, girl -- I kind of respect the multi-layer evil plan here. One thing about Umine, she's not half-assing this, lol. At another point, one of the male MCs says: "After all, those guys from our class aren't doing things like bullying you, right? Wasn't it merely because you regard your surroundings to such a degree of negativity?" Umine has super low self-esteem, was on the verge of suicide.

You really pity Umine in waves and Ayumi helps to remind you that ultimately, that's the emotion you should feel toward someone who (quoting Ayumi): "tried their best to get like and love others...but there is a limit to how many times you could do so without expecting any [like or love] in return...the wounded parts of your heart, your bitterness changed you..." Although I am not sure someone could get as warped as Umine...geezy Pete's. Her mom isn't super affectionate, but it's very clear she cares about her daughter and was having her own trouble coping with Umine's personality...(Do NOT get me wrong, her mom was f'ed up for what what she said at the hospital, but it could be because Umine had no injuries at the end of the day so it was NBD in her eyes? IDK, just not the reaction I would have if it were my kid even if they turned out okay.)

Also: Kaga was so, so swoon-worthy. I haven't felt like this about a shoujo MC in a while (since I was a wee lass, lol) so that was refreshing, too. He's so supportive because he really likes her regardless and would have been with her regardless of how she looked, so long as she was herself on the inside.

Spoiler (mouse over to view)
Everything turns out fine at the end and LOL @ the boys when they see Umine and Ayumi holding hands in their bodies. AND Umine being so cute at the end...refreshing although...after that headache, I don't know if I'd be as nice as them...lmao. I wanted Ayumi + Kaga endgame and that's my biggest pet-peeve.


I inhaled all 15 chapters so quickly. Overall, good pacing without feeling rushed. Some of the character motivations were a little "ehhh, okay, I see it but also...eeehh, ok" but they worked at the end of the day. Art is very nice! Really good stuff, interesting story.

Spoiler (mouse over to view)
Then my ship died. I didn't even see it coming. I mean, are you serious? Okay so say you live in a fake fantasy manga world and you have the miraculous choice to pick a guy who openly supports you, can identify you immediately (even if you've magically switched bodies), isn't ashamed of his feelings, and literally is the reason you aren't depressed. Or you can pick a guy who secretly supports you from the shadows, is weirdly envious of his best friend (even if it was part of his scheme, he was clearly still jealous), and makes you question yourself? This isn't a difficult choice. This is a freebie question.

Good ending...
by SangMo
June 19th, 2018, 6:55pm
Rating: 8.0  / 10.0
Spoiler (mouse over to view)
I'm glad the female lead stayed with the male lead. I felt bad for him almost losing his girlfriend because of another guy. I hated the second male lead for almost destroying their relationship. People gush that he's such a nice guy, but I didn't see that. Luckily he gave up because the male lead did nothing wrong, and she wasn't going to date anyone because of the SML's feelings.
Was this comment useful?  Yes

my first rating
by naimuach
July 24th, 2016, 11:51pm
Rating: 8.5  / 10.0
read all chapters and i'v got to say: very good!
art is good, no crocked hand, proportional body, not too handsome nor too beautiful.
story from start to the end is good, no plot hole, the vibe is a bit dark but is still a shoujo.
what i like most is the character. from what i see, there was no dramatic development about the characters, they already good from start and getting more good in the end of story.

MC was a happy-go-lucky character at first but she will get better later on.
Spoiler (mouse over to view)
at the end of story, she stay love her boyfriend, actually i prefer if she end up with 2nd guy because personally the 2nd guy is better than the boyfriend. but somehow that's what made me like her, because it shows that she is a loyal person and have a strong heart. whats more, she thought about 2nd guy's feeling in order to not make him hurt eventho her heart is still longing for the boyfriend.

the boyfriend is good too
Spoiler (mouse over to view)
eventho in first chapters are showing that he is a jerk, in the end he is a kind of antihero. he loves her so he tried to deceive the antagonist in order to get the body back, while keep watching the MC from suffering from behind

the 2nd guy is my favorite character,
Spoiler (mouse over to view)
he discover the body swap first, very heroic character, even in the end he step back for the MC happiness

and the antagonist is pretty annoying, but she had reasons for it.
its only 3 volumes so the story is not rush and not slow-paced.

I don't dislike any of the characters. I kinda get both sides.
The deceitful side and the victim side.
Both have their own story and reasonable at that.

You can never know someone truly unless you put yourself in his or her shoes.

I've Read 14 Chapters So Far and...
by Piyochan
November 16th, 2015, 2:11pm
Rating: N/A
WOW. This manga is beautiful - the story is super deep and the art is gorgeous.
The manga's comments on external vs internal beauty makes you really think about image from different standpoints. Usually characters in manga change immediately after someone explains that beauty comes from within yada yada. However, it's not that easy to change your perspective. That's why I think this manga is so great. It shows the STRUGGLE to change.

Anyway, I definitely recommend trying it!

P.S.
I love Kaga-kun. He's such a sweetie <3
Was this comment useful?  Yes

Great solid start
by mispelling
November 23rd, 2014, 11:07am
Rating: N/A
Although this plays out in the beginning like a standard shoujo it introduces a twist to it pretty quick. I like the heroine; although her start is a bit shallow in my opinion she's going through good character development and growth. I'm excited to see how far the series will go without dragging everything out (one of the pitfalls of shoujo).

One surprising aspect of this series is how the male leads are not standard male leads at all.
Spoiler (mouse over to view)
Her boyfriend, Shiro who is the first one to be introduced, is rather shallow revealed in chapter 3 when he admits he just likes Ayumi for her face. Kaga on the other hand is the friend zoned guy who admits he still likes her despite knowing she's taken (and continues to like her even after he finds out about her body swap condition.) He's rather brash through his speech but he genuinely likes Ayumi for her personality and quirks.

While it seems premature to comment on it now, the start is pretty amazing and the writing is great as well. Will update more once there is more chapters but for now I would recommend this for all shoujo readers.
Was this comment useful?  Yes

3 Chapters in and it's pretty fantastic
by boblinda
November 21st, 2014, 10:10pm
Rating: N/A
I can't say too much since it's only been 3 chapters but so far, here are some things I really like:

-heroine is ASSERTIVE. My experience with shoujo manga is that the heroine is often either too weak or too strong, either a lovesick crybaby or a tsundere who is hyperaggressive. This one strikes quite a fine balance, where the protagonist is fairly realistic and is neither a damsel in distress nor some super hotblooded crusader. She gets down, gets back up with a little help and goes on her way. Some may find her "too nice" but I'm expecting that this manga will change some of that later on.

- drama + bit of mystery: these two are a good mix with the romance so it keeps things interesting. People aren't always like what you think they are like and you don't know what they want. It's got a good hook and keeps you reading for sure.

I recommend giving this a go, reading and/or scanlating as I think it's one of the more interesting shoujo mangas to come out in the latter part of this year.
Was this comment useful?  Yes