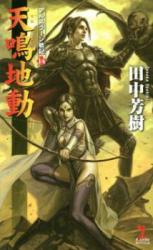 vol 1
by Andrez-ssi
June 12th, 2016, 10:52am
Rating: 8.5  / 10.0
Despite having two anime and manga adaptations, I feel like Arslan Senki is closer to classic high fantasy novels than your run-of-the-mill light novel.

Arslan Senki is set in a parallel world loosely based in pre-Islamic Persia so it falls into the realm of historical fantasy. Actually, the author himself states that he was heavily influenced both by classic novels and epics and historical events. It tells the story of Arslan, crown prince of Pars, a country that was taken over by the neighbouring Lusitania after his father was betrayed by one of his retainers, and his quest to recover his country and the throne. For that, he has the help of Dariun, a warrior among warriors, Narses, a most brilliant tactician, Farangis, a priestess with both beauty and martial skill, and Giv, a wandering musician with both wit and strength. I honestly think this is a very classic RPG-like group with cliche characters but I’m giving it the benefit of the doubt. Although Arslan’s subordinates suffer from a case of Mary Sue syndrome (though this doesn’t mean they’re not interesting in their own right), Arslan himself is a very interesting character. He is just an insecure fourteen-year-old mild-mannered boy who is forced to assume command of excellent subordinates, which forces him to ask himself Am I fit to rule? and come to the conclusion that he is still very inexperienced and undeserving of his very capable companions, thus deciding to become a good monarch. Even though there is not much growth in this volume, I look forward to seeing Arslan changing before my very eyes, both as a ruler and as a person.

I’m also particularly fond of Narses and Giv. Giv because he has a deep-rooted animosity and disrespect for royalty and power-abusing figures, and doesn’t hesitate in making it known (even though his words are often coated in honey) and is a self-serving man who is, in his own words “short on loyalty”, which makes his relationship with Arslan an interesting one, especially as the young liege proves again and again to be nothing like the royals he so despises. Narses because he’s brilliant to the point of considering things we now take for granted but that in the setting the story takes place in are completely innovative, which leads me to an underlying theme in Arslan Senki: social revolution. In a world with a strict caste system and enforced slavery, Narses has the foresight to criticize those practices and the corruption ingrained in the court of Pars, and in a way that makes you chuckle at his gall.

The plot is your classic quest to retrieve the throne so it is, at least to me, automatically interesting. There are also a few great plot twists that have enough foreshadowing behind them not to take the reader by complete surprise.

One last thing I wish to add, the translation by T.E. Waters is absolutely excellent, with stunning prose and fluid dialogue, and there are plenty of notes on the characters, setting, and translation, making it clear he or she did their research splendidly.