Login to add items to your list, keep track of your progress, and rate series!
Description
1-3) Omoi Sugoshi mo Koi no Uchi
Kishida and Hino met at a gay bar. While Hino’s a regular, Kishida was only there because he wanted to talk to someone who could help him understand his nephew who he thinks is gay. Even so, Hino finds himself falling for Kishida. Do Kishida’s smiles and blushes mean Hino can hope for something more than friendship?

5) Sukima
Story of a class president and his secret desires.

6) More Pain
A story about pain fetish.
Akira likes to inflict pain. Minami wants t... More...
1-3) Omoi Sugoshi mo Koi no Uchi
Kishida and Hino met at a gay bar. While Hino’s a regular, Kishida was only there because he wanted to talk to someone who could help him understand his nephew who he thinks is gay. Even so, Hino finds himself falling for Kishida. Do Kishida’s smiles and blushes mean Hino can hope for something more than friendship?

5) Sukima
Story of a class president and his secret desires.

6) More Pain
A story about pain fetish.
Akira likes to inflict pain. Minami wants that pain and wishes Akira to be his master...

7) Eye
A two page short story of glasses and kissing.

8) Primrose
Young Jamie is having trouble adjusting to life with his mother's new and much older husband. As well as life in a new town. Perhaps charming blond Ernest can help him understand the vagaries of love. 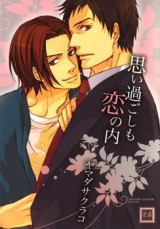 Great ♥
by Airendy
August 15th, 2014, 11:18am
Rating: 10.0  / 10.0
I loved this manga, the stories were almost all good with escessão one that I found very confusing. I really enjoyed the first in which the protagonist thought his nephew was gay and he was ask for advice in a bar...
Was this comment useful?  Yes

Slightly above average
by OmNom
November 24th, 2013, 2:31pm
Rating: N/A
I wanted to like this manga, I really did, I mean the stories all have potential appeals to them at the beginning and I was honestly looking forward to reading them. But then towards the end they fall rather flat and unsatisfying (to me at least). I would've love to see something more, even if just a little, so as to buy the couple's relationships and development. They don't seem very convincing at all in variable ways tbh. The art is decent though, that's probably this mangaka's strongest visible point I've observed to this date. I tried to be more tolerant of the whole manga but I guess I can't do more than I already have.

Liked :)
by Cassandra08
September 29th, 2013, 3:00pm
Rating: 10.0  / 10.0
I came to this manga after reading 700+ yaoi and after sifting through the dung-heap to find the good ones, this seems like a jewel to me. Honestly, I don't understand why people are complaining about it. This manga definitely has some originality. I liked how the mangaka dealt with the kinda realistic issue of a man wanting to both top and bottom, and I liked the cute little oneshots that followed, some better than others. The art wasn't revolutionary, but I wasn't expecting that, so I found it pleasantly viewable and at times downright sexy (I'm looking at you, tall, dark, handsome and glasses in chapter 6, even if you are a strange one). The art improved as the manga progressed. Despite a couple bad reviews, this manga does not have a 7.7 rating for nothing. Chapter 8 is great.So give it a try: you might be fairly surprised. If not, then you haven't lost anything except a little bit of your time. This is a refreshing manga that has a quirky view on the stories it tells, with lovely characters and nice art x

I liked it
by GrapeCherry
December 2nd, 2012, 12:40pm
Rating: 10.0  / 10.0
There seem to be a couple of people who forgot the concept of a manga is not to be realistic but to improvise the writer and readers mind, especially a yaoi manga. I like this. I don't know why so many people disliked it and why the rating looks low.

I love this manga because I'm not picky. Although the beginning did not appeal to me, I endured and continued to read and found an insecure character who is just as developed as any other character I've read in the yaoi genre. All the other oneshots that followed were just as great as the main ones. I like how she, the author, continued the relationship of the first couple within one of those oneshots, creating an environment amongst those characters. I love reading about things like that. And that really short oneshot at the end of chapter six. How can you hate that?

Do not be discouraged to read this because so many other people thought it was a waste of time. It's actually not.
Was this comment useful?  Yes

6) More Pain
by MightyMaeve
October 16th, 2012, 3:22pm
Rating: 9.0  / 10.0
Rating for 6) More Pain only. (The rest were mediocre at best.) This one shot is amazing--it's a theme you don't see explored with maturity very often. The only downside to this oneshot? Its snapshot format.
Was this comment useful?  Yes

Only the first and last!
by Kinky-Chan
October 7th, 2012, 1:22am
Rating: 7.0  / 10.0
Okaaaaaay, so I found the other stories pretty weird! And the only story that kept me going is probably the first story and the last one. Other than that....it feels...weird yet haunting. I don't know how to explain this feeling but it's probably stories that will make me skip them.
Was this comment useful?  Yes

all around quite enjoyable
by pleochroic
January 11th, 2011, 11:47am
Rating: 8.0  / 10.0
the stories are a bit uneven, but primarily i enjoy yamada's art, which isn't pretty, but very expressive -- i'm really glad to see more and more mangaka who develop their own style separate from the typical shoujo -> bishounen BL with its impossibly beautiful men. she also has a sense of humour i can understand (even if i don't necessarily share it). i'll be watching this mangaka.
Was this comment useful?  Yes

Not your usual lovey-dovey BL.
by Poemi
October 12th, 2010, 1:48am
Rating: 5.0  / 10.0
I enjoyed the first two couples, whose stories dealt with a little more romance, while the rest of them were more angst-y and some included S&M. I suppose if you like dramatic, angst-filled stories, this will be very interesting for you. All were short, the "Eye" story being so short that it seemed to lack any point at all - perhaps it was meant to be more mysterious? I have no idea, but it certainly wasn't my cup of tea.
Was this comment useful?  Yes

Not as good as I expected
by Akako
March 16th, 2009, 3:56am
Rating: 6.0  / 10.0
Because of the rating, I thought it has to be at least a good manga. But IMO it's not. The art is so-so, some of the drawings are pretty nice but that's all. The stories are strange and some of them seem to have no point. My favorite pairing is Yoshinari and Akio, though it is far from being developed...
Was this comment useful?  Yes

...
by thismomentisfate
March 14th, 2009, 1:24pm
Rating: 1.0  / 10.0
is Kishida a complete moron? if he has a lover and he is interested in being the bottom, why not talk to his partner instead of going to a whore house? he could have even gone to the internet and done research, but how can he think that its fine to cheat so long as u imagine its your partner, its still cheating. although, he does claim to not have being able to do it at the end. supposedly he only got information, but im curious about what he actually did at that whore house, his partner should have dumped him for being so stupid. it bothers me that he is so willing to cheat on his partner and he doesnt seem to feel guilty about it, if he wanted to please his aprtner, he would have just talked to him and not even consider cheating.