Login to add items to your list, keep track of your progress, and rate series!
Description
From VIZ:
In the not too distant future, mankind battles over O-Parts, relics from an ancient civilization. It takes a special kind of person to unlock the full potential of these remnants from the past, and a unique breed of humans known as O.P.T.s (or O-Parts Tacticians) become a force to be reckoned with. Unfortunately, O-Parts can be used for good or evil purposes.

Jio is a young boy with a tragic past who only trusts one thing in the world: money. Little does he suspect that he is actually a very powerful O.P.T., and inside him sleeps a demon of incredible ferocity. He meets up with a gi... More...
From VIZ:
In the not too distant future, mankind battles over O-Parts, relics from an ancient civilization. It takes a special kind of person to unlock the full potential of these remnants from the past, and a unique breed of humans known as O.P.T.s (or O-Parts Tacticians) become a force to be reckoned with. Unfortunately, O-Parts can be used for good or evil purposes.

Jio is a young boy with a tragic past who only trusts one thing in the world: money. Little does he suspect that he is actually a very powerful O.P.T., and inside him sleeps a demon of incredible ferocity. He meets up with a girl named Ruby, and together they decide to embark on a dangerous quest to discover as many O-Parts as they can. Will Jio help Ruby realize her dream of becoming a world famous treasure hunter? More importantly, will Ruby help Jio realize his dream of--world domination?! Less... 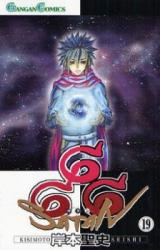 Note: You must be logged in to update information on this page.
Forum Posts Click to view the forum
timeskip location
over 10 years ago
An Anime?
over 12 years ago
666satan's ending.
over 13 years ago
a question please
over 14 years ago
Confusion?
over 16 years ago

Very nice but reminds me a lot of other manga..
by weltall2
September 20th, 2007, 9:29pm
Rating: 10.0  / 10.0
Actually I am liking this one very much. It did not actually remind me of naruto at first. The story that came in mind was One piece. The happy go lucky hero the is a bit slow but strong and the smart girl that follows him. Up to now it reminds me various anime compiled in one. One piece, naruto, dragonball. Calling it a ripoff is not right since the story is unique. Using parts from others is ok as long as he changes them to follow the storyline. I am sure since you are reading this that you like it. I too have felt weird when I felt some parts reminded me other anime but that doesn't mean I do not like it. Great story up to the point I have read and I am very sad that I did not read it up to now cause of its name. I thought this would be a gothic like anime but it turned out to be a fun one. As for the story being similar to other stories,, i do not remember its name but treasure hunting is not a new subject. But I like it how the user of the treasure adjusts the weapon depending on his own energy that his body contains. I am giving it a 10 and I will keep voting for this manga that after so long time of coming in here made me register just to comment it.

The only minus I see up to now is the there is not 1 scanlation group that will keep scanlating but many different scanlators keep popping up translating random chapters.

and N and 666 were created by brothers who both grew up watching dbz(amen).
so if you have to compare, dont compare 666 to n compare n and 666 to dbz


if you havent read it yet, do youreself a favor and read it

Lots of sex appeal for one thing...
by Merlerna
August 10th, 2007, 7:21pm
Rating: 6.0  / 10.0
I really like the characters and plot. At first I couldn't get into it because there was too much talking but after skipping those and going onward I became intriuged by the characters. One thing I like about this manga is that there's sex appeal. Male and female alike. And the characters are a bit cheezy but very likable.
But please, don't compare this manga to others. Like it for what it stand for and for itself.
Was this comment useful?  Yes

Decent
by Invincible
May 29th, 2007, 12:31am
Rating: N/A
First of all, the Mangaka is Masashi Kishimoto, Seishi Kishimoto's Brother (the mangaka for Naruto), so there is an obvious link between the two series. SO STOP COMMENTING ABOUT THEM BEING ALIKE. The two drawing these series grew up together, probably shared the same manga issues...

Anyways, I find the series decent, it doesn't have a superb anything, but good everything. It has little plot twists, small bumps in the story, good characters, but in the end it just lacks that spark that makes it stick with you. I find that it lacks that little bit that has me counting down the days to read the next release. I'd recommend reading this if you want a good read, but don't expect it to be that big read.
Was this comment useful?  Yes

but the end...... argh. i didn't like that ending. it left me really confused.

stop with the comparison!
by lilyana
May 7th, 2007, 11:02am
Rating: N/A
i realize the story arcs, art, and characters are similar to naruto, but taken at face value this is a great manga. the name through me a little at first, since i read the first volume under the american title "o-parts hunter" but i still enjoy it a lot. it's gat great character development, and just enough romance and scifi to keep it out of the people just beating on other people catagory. it's got a ton of intrigue and characters switch sides a lot. all in all it's a great manga.
Was this comment useful?  Yes

Messy
by Sole
May 4th, 2007, 5:51am
Rating: 6.5  / 10.0
I've only read a few volumes, around 6 or 7, I didn't mind the resemblance to naruto since both the artists are brothers, and they're different enough with their own styles honestly, I actually found it feeling more dbzish than naruto, but that's not what bothered me with the arts. The character designs and arts had similarities to also other series design-wise, dbz and bastard!! to name a few, not to mention some of the likeness to the story, and elements, it could be just me and being over sensitve.

I can't comment much on the plot however since I didn't get very far but it also progresses like typical shounen action manga which turns me off from the series.

Give it a try, but definately not my cup of tea and the first few volumes felt like a mess and felt unprofessional due to a few similaries to other series with amateurish art, instead of being "influenced by", it felt too close to being a Rip-off of a few great series you might know of, or it could be just my lame over analysing of a good series, but the overall flow of the story and everything together wasn't good enough to hook me.
Was this comment useful?  Yes

Even if they are brothers...this is a rip-off
by Daedalus
April 29th, 2007, 12:16pm
Rating: N/A
Sorry but this is no Naruto and that's not a good thing. The demon inside, the horrible character designs, the lame powers, evil organization, time skip..this is juvenille copying. It's hard to imagine any serious manga creator or fan would like this...it's one thing to rip off another's work but to do so so blatantly is just crazy. Whether you are a hater for Naruto and manga success or you just genuinely like this book, it's hard to respect the work or the manga-ka based on his blatant unoriginality. We'll see what happens when the anime comes and if this achieves any success in the world...
Was this comment useful?  Yes

i like it
by Jaxl
April 15th, 2007, 10:07pm
Rating: N/A
i like wat ztrik said. "naruto" really made me excited before it turns into a "monster fight" story from the "warrior fight" story, which make me more and more disappointed after 150. seems tat the author is began to impatient, is it?
however, the "666satan" makes the difference. i become more and more interested in the story juz like reading naruto b4 150. the author knows to make funny screens using comic and reminds me my favourvite, dragon ball.
if talks about the similar between 666 and naruto, well, maybe it give the same feeling in the begining of the story, but try think some differences. first, the main character of the story: fighting style(quantity of using brains in fights), relationship with female, occupation... thus, think about the background, and u will found tat the only reasons they give the same feeling are juz the beast in the body and the word "dream". it should make sense tat they are not copying or twins or something like tat. if ppl even think tat using spirit power is copying the chakra "theory", i would say tat ii's also a copy of "shaman king"(y not? the spirit is juz like o-part).
the story has it's own style. it talks about many ancient power juz like a story of treasure hunter, or a story of the guild wars. i like it and the author really make me laugh often. ^^
(does someone thinks tat the third eye of cyclop clan is the copy of the sharingan?)
Was this comment useful?  Yes

Great Shounen.
by llbloodll
April 9th, 2007, 10:32pm
Rating: 10.0  / 10.0
I am surprised about the lack of popularity with this series, because in reterospect it is just a beefed up Naruto with more potential if you ask me. Anyways this series really does show some really touching concepts, from my favourite scene (probably in any manga) would be when you see Jio and Ruby sitting upon the ship viewing the moon, simply speechless with that. Aside from that, the characters themselves are built up exceptionally well for a Shounen manga, and I like how the characters were given time to develop and even more so how the time-skip aided instead of taking away from the whole thing - although I did not like how it was done in close proimixity to Naruto, but it did pull it off much... much better.

Anyways, this just one of the best Shounen's around and is still going strong. 10/10


Add on, I'd like to say that, for all you people saying that Naruto and 666Satan are copies are therefore 666Satan is junk I'd like to advise you otherwise. If you don't look at the similarities between the manga's and see the series itself as a whole, 666Satan is brilliant. Utilizing concepts that are only a step below Evangelion, bringing out characters with real feeling, and the stunning fighting scenes top it all off. All in all, 666Satan proves itself time and time again, and I think that even when compared to it's Naruto counterpart, it only excels even more.