Login to add items to your list, keep track of your progress, and rate series!
Description
Beautiful naive Minato Akina has come to Tokyo to seek his fortune. Losing all his money on the first day does not bode well for our young hero. A chance meeting with down on his luck Chiba Rintarou gives Akina a shot at becoming a young idol! But Akina and Chiba are both carrying scars from the past. 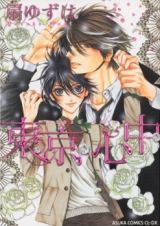 Errrrr
by hirukayuki01
April 10th, 2017, 7:39am
Rating: 5.0  / 10.0
It started good and interesting. I would lie I don't say that art managed to win me immediately. So yeah, it had potential but as it goes one it turns out to be pretty boring. Author failed to execute some parts like the angst part of it. It just passed by and left me uninterested. I don't I will be able to remember this manga someday...
Was this comment useful?  Yes

Not my favorite of the Mangaka
by Namiya
December 21st, 2012, 2:27pm
Rating: 8.0  / 10.0
I didn't dislike this but it didn't have the same effect on me as Ougi Yuzuha's other works.
Maybe because it has 2 volumes and feels more drawn out? Or because I didn't like the main character as much as I could have? Or because I prefer her manga to be more loaded with pure sex? No idea but it was an entertaining read for me, just not AS good as her other works.
Was this comment useful?  Yes

Tokyo Shinjuu
by angelkurisutin
December 26th, 2011, 11:24pm
Rating: 9.5  / 10.0
This manga is another great work of Ougi Yuzuha's. I really loved Akina's character, and though I disliked Chiba at times, Akina was able to bring out the best in him and they worked really well as a couple. There were parts that were rather sad, especially with Tsubaki, but everything ended happily. The last story focusing on Mari and Kyouhei absolutely melted my heart (the ending!). I can't wait to read the spin-off series that stars them!
Was this comment useful?  Yes

Two years later... XD
by Sasageru
May 15th, 2011, 6:02am
Rating: 9.0  / 10.0
So i've been reading the released chapters and i have to say im pretty hooked. The characters are amusing and sort of cute, the story itself follows the same line - i also love that the chapters are long (up to 50 pages each) which is getting less common in manga. On the art side, its rather good,and somehow the mangaka manages to squeeze in alot of content in just a few pages thanks to their ability to draw multiple panels without causing confusion on single pages. I'm really ejoying the series but... where is the rest?

I'm guessing DP has dropped this as there have been no new chapters released for years, which makes me rather sad.
Was this comment useful?  Yes

OUGI Yuzuha
by ragec
January 13th, 2009, 8:14pm
Rating: 10.0  / 10.0
OUGI Yuzuha did it again!!! I have high expectation and i agree to the comment below that this might be the best work of Ougi-sensei. I'm not really into complex stories but I'm really interested for what happen next. It takes time to get use to the artwork, not really the best but still good.
Was this comment useful?  Yes

High expectations
by al-bana
August 28th, 2008, 4:00am
Rating: 10.0  / 10.0
It looks like it could be the best manga of Ougi Yuzuha. The artwork is beautiful (eventually!) and the characters are loveable. I hope Dangerous Pleasure will scanlate it fast.
Was this comment useful?  Yes