Login to add items to your list, keep track of your progress, and rate series!
Description
Mayumi and Miya are high-school sweethearts, and all goes well until Mayumi comes to his boyfriend with a strange request. 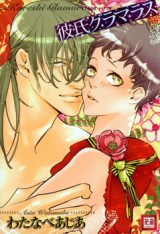 Changing Character Design
by FeyPhantom
March 3rd, 2015, 3:03pm
Rating: 6.0  / 10.0
I think the thing that really bothered me in this was the changing character designs. It's said that Mayu is growing taller and more mature-looking but more obvious is Miya becoming younger-looking as the story progressed (it's even commented on in an extra). I get that it had to do with the mangaka's changing tastes, but I find it kind of sloppy to just casually change character designs on the go. You may as well just start a different story if you want to draw a shota-looking uke.

Other than that, it really is just a smutty yaoi the likes you can find all over the place. Not really the kind of humour I laugh at but may be funny to others.
Was this comment useful?  Yes

LMAO
by supmaguire
July 3rd, 2012, 12:15pm
Rating: 9.0  / 10.0
I clicked on this manga as a whim and I'm so glad I did. You can tell that the mangaka has a great sense of the absurd because this whole manga is RIDICULOUS. She uses all of these typical tropes like the boyish uke and the manlier seme, but then she turns the tropes upside down by making every single character RIDICULOUS. Try expecting what happens--I dare you. Except for guessing that smut and sex will occur, you probably won't guess right lol *SEAL OF APPROVAL!*
Was this comment useful?  Yes

kinky fun is made of win
by Embracing Madness
March 9th, 2012, 4:41pm
Rating: N/A
Heh, smut with humor! There isn't much in terms of plot and the art is only so-so, but the couple here is sweet and the situations they get into always utterly hilarious. Something about their faces makes me crack up every time I look at them, hee!
Was this comment useful?  Yes

Sex+Plot
by Kulianne
November 20th, 2011, 4:22pm
Rating: 8.0  / 10.0
I usually am quite ._. when it comes to the plot of any Yaoi manga. However, for the first time, I actually got into the story and enjoyed it.
I laughed so much I thought I was going to fall off my chair.
I liked the characters, they were quite realistic and the art was very enjoyable.
I really enjoyed it that the mangaka explored the relationship of the two, making them switch positions, having their own kinks and having a fight with each other.
I usually don't give more than a 6/7(except Complex) to a Yaoi but I just felt that this one deserved more. Therefore, an 8.
I also liked the oneshot, though it wasn't impressive.
Was this comment useful?  Yes

HOT OMG
by jellaaay
September 21st, 2011, 6:46pm
Rating: 10.0  / 10.0
I've read a pretty decent amount of hot smutty yaoi but this one just takes it to another level. The fact that urination didn't gross me out makes this more different from the usual hardcore yaoi. (I'll update this once the scanlation's complete)
Was this comment useful?  Yes

Hahaha! This was hilarious! The two main characters are a bit different from normal BL guys. They're more masculine, they wrestle and fight like boys, they switch top and bottom positions every once and again, and no one's the damsel in distress!!! They're like equals, which I LOVE.

Seriously, they're a blast to read about. Their personalities are different yet similar enough that they're hysterical around each other. This is good, overall. I get tired of the BL stories where one guy pretends not to want the other one. That's SO not the case in this story.

I hope someone finishes translating it eventually...

EDIT: they finished translating it, but most of it was about the older brother. He creeps me out kind of... I like the main couple better. I'm reducing my rating from a 10 because I REALLY wanted more of the main couple...and the ukes got too weird at the end when they weren't before (don't like that). However, I do think the two brothers are hilarious around each other - they bicker a lot but they do (mostly) care for each other.

Hot
by SmexyBL
August 14th, 2011, 9:37pm
Rating: N/A
This was a really good manga and sooo hot. the first chapter has some gross stuff in it but if you can handle a little then go right ahead. The rest are really amazing. I love the main couple because they are a reversible couple! ah just a little kink of mine because I think you have to be ok with ur self to do that and its great.
Even the extra couple with his bro is good. I am glad in this one(the whole book) there was no uke that was denying himself of what he wanted and they were both straightforward. Not much plot and lots of sex. Great drawings too!
Was this comment useful?  Yes

Ohmygosh
by Lucky-chan
August 5th, 2011, 9:48pm
Rating: 9.0  / 10.0
This was effin' hilarious. Though there's really no plot development, this manga is seriously a good read if you're into kinky stuff. I mean seriously, the ending of chapter 1 killed me. xDD
I only rated this a 9 since there's no plot. Haha.
Was this comment useful?  Yes

kinks and hot stuff
by torride
July 27th, 2011, 3:23am
Rating: 10.0  / 10.0
phew! expect all kinds of kinks with the mangaka when it comes to her work. This one is no exception, I don't mind the kinks though....been reading a lot of yaoi manga and this one swerves off the normal lane, the art is captivating and the scenes are hot as ever.
Was this comment useful?  Yes