Login to add items to your list, keep track of your progress, and rate series!
Description
#1: "Aishiteru", Uso Dakedo
He's a liar. He's a player. He's the worst. Even if I knew that...why did I fall in love with him?
This is the story about the encounter between a charismatic handsome boy and a serious girl...

Runa was supposed to be able to wield magic. And Cloez is bound to her as her servant. But even if Cloez is always by her side as her attendant, she is unable to capture his heart...

#3: Mayonaka no Orion
Not scanlated yet 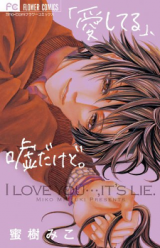 It was okay until the end.
by Lacy99
June 19th, 2017, 9:59pm
Rating: N/A
So the heroine was a nice change from the usual shoujo heroine. She hates guys and thinks they're all liars and players. She keeps a notebook of observations on guys in the school where she assigns them points based upon the behavior she sneakily catches. The biggest player in the school finds it and blackmails her into dating him because he wants her to raise his score to a 100. There were some funny and cute scenes, and I liked the way the mangaka drew the characters.

But the ending totally turned me off.
Spoiler (mouse over to view)
He ends up distributing copies of her notebook around the entire school because he's almost yandere-level possessive, and he wants everyone but him to hate her. But it's "all her fault" for saying she was going to be more open-minded towards the guys in the school instead of hating them based on their gender, and he thinks it would be fine if everyone hates her because she'd still have him.
I'm used to seeing borderline-abusive behavior in shoujo guys that we would never tolerate in real life, and that's okay, because it's fantasy and they usually reform in the end and become "nice guys". But, he crossed a line at the end, and he wasn't the slightest bit regretful, if anything he was annoyed it didn't work. That was a tactic abusers often use to isolate their victims. What would he have done if she'd been attacked as a result of his actions? Ugh.
Was this comment useful?  Yes

a little weird
by P0laris
December 29th, 2014, 2:35pm
Rating: N/A
i just finished the first story, it was funny but you can't find a really deep meaning in it. the girl isn't your typical mary sue, she doesn't like men and think they're all liars but ended thinking the weren't all like that, that point is fine but the guy at the end, turned out to be a selfish but i think that was to add some drama. there were some kawaii scenes (haha)it's an OK read.
Was this comment useful?  Yes

Well, I certainly agree on the other comments
by theLettuceGarden04
August 7th, 2014, 9:41pm
Rating: 6.0  / 10.0
...however, it's honestly not that bad. You see a heroine that is indeed "mean", but I like the fact that unlike most shoujos, this one can bite back. She is a weirdo for liking him, but personally I think they deserve each other XD. Not a healthy start to a relationship, but I think she can handle him well anyhow

Okay, what the heck?
by Imsexyandiknowit328
July 16th, 2014, 11:29am
Rating: 3.0  / 10.0
So this girl keeps record of the guys and rates this in this notebook that is basically like the hate book in Mean Girls. A guy finds it and demands she date him. In return, he won't spread it around school.
Spoiler (mouse over to view)
Aaand then, in order to completely monopolize her to the level of being creepy ("You're the one who's wrong because you want to talk to other guys. It's okay if everyone hates you because I love you.") And she just accepts it and considers it sweet. If I were in her shoes, not only would I sue for harassment, I'd move to a different country, change my name, and talk in a fake accent.
I very much disliked this manga. It's pretty but it creeped me out.
Was this comment useful?  Yes

Irritating.
by kichiX
May 22nd, 2014, 10:04am
Rating: 3.0  / 10.0
Spoiler (mouse over to view)
So, to stop her from talking to other guys he photocopies her note book with all her observations on guys and spreads them around the school. And she just accepts it???. "It's okay if everyone hates you because I love"? Of course it is if you're not the one being hated. And the way the author gets round it by tacking onto the end how she becomes more popular because of it...He didn't know that was going to happen (and was actually put-out about it) before he spread the notes everywhere, did he!

Anyway, the love between the leads seems superficial at best. I still felt like he was lying right up until the end, and her behaviour at times is incomprehensible. Up until the end (see above) it was fairly standard, but that ending...!
Was this comment useful?  Yes

An interesting story, art's OK by Mitsuki Miko's standard
by ishitagupta
December 19th, 2013, 10:35pm
Rating: 7.0  / 10.0
The bishie's not as smexed out as he generally is, but I suppose Miko is just trying to introduce some diversity in her art. Story is cute, a little bit of a Mean Girls angle thrown in! Surprisingly, the shoujo is a ballsy and rational girl in this one who doesnt sigh and fall in love at a moment's notice. She's wary and constantly on guard, which is how we all are at 16 I suppose! Scanlation's done a bit clumsily though, so the english is rather broken, but you'll be able to figure it out just fine.
Was this comment useful?  Yes