Login to add items to your list, keep track of your progress, and rate series!
Description
In a city where the law has been rendered non-existent, Yuki and his best friend Tetsu break into the offices of the Seidoukai to steal in a desperate attempt to finance his ailing brother's hospital bills. They ultimately fail but instead spark the interest of the mob's young leader, Kazutaka Hyodo, who offers Yuki a deal he can't refuse: pay him a visit at his office once a week and all hospital bills will be taken care of. Yuki accepts without hesitation and in order to keep his end of the deal, starts paying Hyodo the visits he asked for... 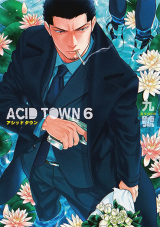 Note: You must be logged in to update information on this page.
Forum Posts Click to view the forum
Who do you think Yuki will end up with?
over 5 years ago

Wait 50 more years
by TheOneWhoGotAway
May 19th, 2022, 9:19am
Rating: N/A
This was one of the first few BL's I've read during like 2011-12. After that I've read it for few more years before dropping it. It updates once in a blue moon. Every time this updates you'll forget what happened so you'll have to start again. Just wait till they finish this.
Was this comment useful?  Yes

one helluva ride.
by 8blkpaws
February 28th, 2021, 2:03pm
Rating: N/A
I was iffy picking this up, because its been ongoing since 2008 and the updates are far and few between.. which really friggen sucks, because once you get into this.its hard to just stop. it has some spicy yaoi elements, but its actually a deeper story, once of the best i've ever read. This is a great manga, and I hope that i'll have a conclusion in my lifetime..
Was this comment useful?  Yes

Love it
by kaylaz8901
November 5th, 2020, 12:28am
Rating: N/A
Sometimes I don’t understand what’s going on but other than that I love and adore this manga. It is one of my favorites.

Yaoi is a side story in this one
by NomenDeRose
September 7th, 2019, 7:00am
Rating: N/A
Yes, it's there, but in bits and pieces, it's not the main focus of the story by any means. There is plot and subplots, character growth and well-timed past reveals. It's much more of a story of survival and revenge than BL, wonderfully drawn and with a good pace. I'm hoping to see some side stories, because I would love to know how Handa got his scar and what tattoos he has. Starting as a sort of goofy side character, by chapter 45 even he has grown into his own and I've gotten attached to him as well as the MCs.
Was this comment useful?  Yes

Wow
by firewolf19
November 9th, 2017, 11:36am
Rating: 10.0  / 10.0
I was super hesitant to read this because I assumed, based on the description, that Acid Town would follow the typical yaoi formula of MC becoming the sex toy of some sexy but ruthless mob guy and falling in love him along the way. I WAS SO WRONG.

I tend to steer clear of most yaoi manga just because they often 1) have little to no plot 2) have the MC get raped by their supposed "love interest" and 3) can be rather devoid meaningful/deep character relationship. But Acid Town is none of these things. What's great about it is the plot is always at the forefront and any sexual scenes are actual important pieces of the plot, not just smut. So if you enjoy BL works but don't care for the usual tropes associated with them, I highly recommend giving this one a try. But I'd also say even if BL isn't really your thing to try Acid Town anyways, because romance is very much a subplot here.

All that aside, Acid Town is definitely a serious story with a mature vibe and reads like a seinen manga. The plot is amazingly intricate, albeit a little hard to follow at certain points, but the story-telling is top notch. I really enjoy the art too. It's a different style from most yaoi mangas as it leans slightly more towards the realistic side, but I think it's great. Definitely give it try!
Was this comment useful?  Yes

deep story, character development, & emotions :(
by luminousbrink
October 15th, 2017, 4:50pm
Rating: 10.0  / 10.0
I read Acid Town a few years ago and recently came back to it because I was looking for a new manga to read and I saw that many more chapters were released. The story was so good that I read 37 chapters in one night O _ O.
For those looking for a typical BL story, this is not it! This story doesn't have too many sex scenes at all, rather is focuses more on the relationships among all the characters, the pasts they have & the goals they want to achieve. It's an emotional ride because everything is sad, intense & makes you really think about life and one's purpose/place in it (sometime's things are out of our control) and if there are ways to change the position you are in.
Also I would like to add that the art is beautiful & detailed. Not the typical BL manga art style. Please check this out if you are looking for a mature & intricate story. For the romance aspect, I would say it plays a smaller role in the story rather than being the primary focus (although the romance is still important!).
Was this comment useful?  Yes

Everything in this manga is soooo well-done I have no words to describe it.
At first I thought it was your typical crappy yaoi (something like : "you're gonna pay me back by having sex with me", "NO ! Whyy~~", "I know you want it !...". And bit by bit they're gonna fall in love and go beyond a physical relationship. But then shitty love triangle with the childhood friend... Ahem. Well I've read so many shitty yaoi I could basically write up the story xD).

Hopefully it didn't go in that direction AT ALL.
This manga has a seinen vibe. It's really deep and psychological.
Every character was badly hurt in their life. Everyone has secrets and they're fighting/trying to get revenge. But truth is they were just unlucky, and justice doesn't exist in the yakuza world. They really curse their own situation.
They have been tainted by their hardcore past and some seem to have real psychological problems, but even so they're just humans so you can't dislike them. Even the evil ones fascinated me : they really have no values. The only thing they stand for is a "code of honor" that doesn't even follow human rights (the world of yakuza is really ruthless). It really got me to think !
Female characters here are top-notch too !
Each character goes in the front row at one point so we learn all their stories. The all thing kinda works like a puzzle and each new chapter adds a new piece. The plot is so well thought-out, everything is so logical, so realistic, so freaking awesome...!!

But what got to me the most were the feelings. OMG it's as if i've been ran over by a truck.
The angst is so real it had me dying !!
I swear I felt so bad for the characters I couldn't even cry ! More like I wasn't allowed to cry !! They were so strong, so cool, fighting with everything they got. They didn't cry so I felt like I couldn't either (but tears still fell down).

Once you'll have read it you won't ever dare to complain again.
Now everytime I'm in a "bad" situation I'm like : "Girl. U serious ?? You pathetic little human ! Are you desperate ?? NO !! Have hopes disappeared ?? NO !! You don't live in Acid Town so get yourself together already !! Lift up your head and FIGHT"

If you haven't understood it yet : beware it's heavy stuff. So do yourself a favor and don't read it before sleeping.
Because I remember that when I caught up with the releases (I read everything in one go. I was sooo hooked !!) I felt so dead inside I didn't know what to do anymore... Just WOW.

Waiting for new chap as always
by jongjongie
August 5th, 2016, 10:46am
Rating: 10.0  / 10.0
So here are some of my thoughts:
- Reiji was originally in love with his brother Ryuji
- Tetsu may develop as an antagonist (or maybe not)
I long to know what will happen once Reiji knows Yuki is his nephew. But more than anything I want HyoudouxYuki.

So I don't usually comment on incomplete manga
by Ginny
June 25th, 2015, 11:29pm
Rating: N/A
This is the first actually. The characters NEED Jesus. Allah, messiah, Buddha or lady luck. They need some higher power because DAMN! I did not need to read this right before bed. Like fu*k. I don't think I ever cursed in a review. Life's a cold b that'll shoot you in the face and the back. Well, this was sad, depressing, and I was angry enough to shoot some characters. Like back the f off Yuki. He already has too much bs to deal with, but Kyuugou keeps popping a cap in all her characters butts. I definitely need a light hearted comedy before bed.
Was this comment useful?  Yes

Another GOOD one by Kyuugou-sensei
by IAmKingTarquin
May 4th, 2015, 1:49pm
Rating: 10.0  / 10.0
And like her good ones, we have to wait for the next installment. :/ I like it still though; the way Kyuugou sensei tells her story and well, everyone has something to do with someone in THIS story.

Also, can we update/add Yaoi in the genre? It didn't show the Yaoi in the first few chapters, but well, the *fun* part shows in the latter ones, so please mods? *Mwah!*