Login to add items to your list, keep track of your progress, and rate series!
Description
The bright spot in Futaba's lonely childhood was Yuki, a pretty boy who helped him when he was lost and would magically appear to relieve his tears. One day, Futaba, sad at his parents continual neglect runs away and asks Yuki, "Do you hate me too?" Yuki responds with a kiss and then disappears. Years later his father announces that his brother, Kazuyuki, from a previous marriage will be living with them. Yuki has returned to Futaba but the gentle and kind boy of the past has been replaced by a cold and beautiful stranger. 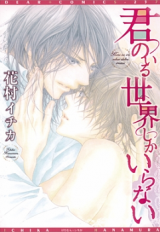 Not too good
by WhiteIsBlack
October 20th, 2019, 3:12am
Rating: 3.0  / 10.0
Nice art, but I don’t see much build up between the characters. It doesn’t make sense that Yuki wants to ruin Futaba and leaves him afterwards but wants him back. I don’t like their sex scenes at all because they’re boring and suck. The other two pairings are ok, but the main couples, no.

Helloooo? Where's the protest?
by Kinky-Chan
December 4th, 2013, 5:52pm
Rating: 7.0  / 10.0
First off, I liked the drawing ever since I read Kimi wa Amai Amai by the same mangaka. But if you wanna compare which story is better I'll prefer the another one than this. Basically, the background story about Futaba and Yuki is very clear, I understand who they are, what happened to them etc. But something is just wrong with Futaba.
Spoiler (mouse over to view)
I mean, dude, the one he likes just slept with another girl and then he comes over to rape him!
Well maybe Futaba wouldnt protest since he's in love with Yuki, but there's a limit to how naive you can be. Throughout the whole three chapters, I think there's more physical connection than love. Overall it's just too..dull and blunt.

The second story is...quite interesting. At least better than the first one. Most manga with bad main story, always have a side story to make up the bad part, which I think...it's pretty acceptable.
Was this comment useful?  Yes

Interesting drawing style, average story.
by Yankee-chan
October 22nd, 2013, 3:50pm
Rating: 7.0  / 10.0
I agree, that the drawing style of HANAMURA Ichika has it's strong points and comes off with unique trades. Still, for my taste there is room for improvement and after reading other works of her, I wondered about a few ticks, like why one guy always has to leave on his pants or is running around with his shirt open. Haha. However, the body physique is a strong point and I like the edgy outlines.

As for the storylines they are unfortunately only average and especially the main story about Futaba and Yuki lacks a little bit of development in my eyes. Their relationship stays rather phyiscal till the end and in-between suddenly turns into a "peachy" one every now and then, which makes the feelings seem somewhat shallow, while the best(!) friends years long love got almost completely ignored by his interest. Sighs. That are only small things, yet it would have been nice to see them solved in a different way.

The 2nd story inlcuded ("Melo") was the strongest, if you ask me. It's a tender story and it is dealing with a serious matter, which is often treated to lightly in the genre. One can imagine, that the fact of being seen as "abnormal", just because one has an interest in the same gender, and the fear of being hated or seen with disgust, is still an actual topic. That's why, it's a refreshing realistic view on the scene, kind of?

As for the 3rd story, it's also not done badly, but a bit more stereotyped and corny, being put together from dramatic scenes. Well, if you like drama, then you might like this one and will be stuck with it in one go.

All in all the drawing style made me raise my rating again, yet the praised stories haven't been able to match my expectations completely, but also didn't crash them. If you like angsty and dramatic relationships, then this will be your cup of tea.
Was this comment useful?  Yes

Pretty typical of Hanamura Ichika-sensei
by OmNom
October 21st, 2013, 7:49am
Rating: N/A
I suppose this is basically what sensei's stories are practically made of. To be completely honest, I don't think they're that special or extraordinary in any sense, but I have to give credits to the magnificent art and the scrumptious yet not too sultry or vulgar steamy scenes (as always). It might be due to my bias of Hanamura Ichika-sensei that I don't hate this manga; otherwise if it were done by someone else I probably would not have received it so lightly and generously. Regardless, I did feel a little something stirring inside me while reading so it's not like this is totally terrible. Angst probably is sensei's forte and I don't oppose that, she does have very good angst-filled stories, I just hope that she would not run out of material too quickly and turn repetitive after a while. That really is my most sincere wish for the mangaka.

More please.
by MirayAllen
May 13th, 2013, 2:12pm
Rating: 8.0  / 10.0
In less than a few weeks I went on and reread this, and now I feel like updating. Truth be told, I really missed Hanamura Ichicka-sensei's art. Even now I can't quite say I'm fond of her storytelling (though I love the inner monologues) since it's always so fast-paced it feels like rushing in and out of things. or instance:

Spoiler (mouse over to view)
see how pushy Futaba is when he meets Yuki-chan at the school gate. I don't like how he keeps asking "Isn't that because you love? Don't you love me" stuff of the sort...
Other than that, I loved the plot. I always connect both with uke and seme in sensei's mangas. I find them quite lovable, no matter how messed-up they are. Here is no exception. I think it has something to do with the eyes. When those things pop up I lose myself in them and can't get out. They always so painful, so guilt-stricken, so lonely, I don't know how to feel. Even in the midst of Futaba and Yuki-chan's happiness I can't help but feel like there's something missing there - a true happy ending. I can't say I deslike it because, truthfully, I love the underdogs, I love angst, unhealthy relationships, possessive couples and disturbed semes with a potential tendency towards violence (whatever kind of it). That's why I love Yuki-chan. But Futaba too, despite the childish features and the passive compliancy, I can't help but feel like hugging him and tell him everything is going to be fine -- seriously, I hate cutesy ukes. Those of Hanamura-sensei's are probably the biggest exception (again, those eyes.....)

She also knows the difference between sex and love-making, so that's a great plus? Either way, I still can't care for the smut in her work. Everything is so passionate and painful I just feel like crying.

So after a second reading I'll give it an 8. Maybe if I read it once or twice more I'll change my mind again, we never know fufu~

Bottom-line: a heartfelt read, with a very curious art, perfect if you love dysfunctional families, messed-up but compelling teenagers, angst and big, goggled eyes that will haunt you forever.

fascinating art
by undernight
March 6th, 2013, 10:55am
Rating: 10.0  / 10.0
even though it's really not such a deep plot, I totally fell in love with the drawing. just one expression, one look of a character can make you feel down. every detail inside this series is preciously treasured. I loved the heavy ambience.
Was this comment useful?  Yes