Login to add items to your list, keep track of your progress, and rate series!
Description
Nicknamed the “school for future criminals,” Yusung Technical High School isn’t exactly the ideal place to study. A rarity among his peers, Gamin is a student with just one goal: to get into university. At a school where it’s every man for himself, he is rejected from countless study groups before he decides to form his own. When Hankyeong, Gamin’s former tutor, joins his high school in hopes of earning her teacher certification, it seems like they’re both reaching for the impossible. Can they defeat the odds and achieve their dreams?

O... More...
Nicknamed the “school for future criminals,” Yusung Technical High School isn’t exactly the ideal place to study. A rarity among his peers, Gamin is a student with just one goal: to get into university. At a school where it’s every man for himself, he is rejected from countless study groups before he decides to form his own. When Hankyeong, Gamin’s former tutor, joins his high school in hopes of earning her teacher certification, it seems like they’re both reaching for the impossible. Can they defeat the odds and achieve their dreams?


Related Series
The Age of the Barbarous (Adapted From) 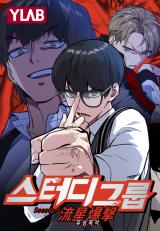 Ya know?
by l00th
March 5th, 2022, 2:54pm
Rating: N/A
So far it’s fairly average read except the teacher is so hell bent on making people study that she could literally be getting stabbed to death and she’d still think only about making students study nd stuff….so..kinda cringe but otherwise ok i guess
Was this comment useful?  Yes

Great but a needs to slow down at times
by The1Rin
February 19th, 2022, 12:14pm
Rating: 7.0  / 10.0
It's great, about a lonely cute badass kid who wants to study so he makes friends and forms a study group. Has an overarching mystery/villain and stayed on track with its main goal.
Fun cool action and an intriguing plot.
The only complaint I personally have is that there is very little time to breathe between arcs as it's only plot and action with backstory sprinkled in between as there are no moments of the characters just hanging out or studying/helping each other study like kids their age would in a study group, as every moment that would be like that is very short because it's there to add plot.
This story is kinda reminds me of eleceed or lookism but it's missing the moments where the characters can just relax and have fun which are my personal favourite moments in those other webtoons because without them I don't get enough time to enjoy what they have and the relationships they have built as I'm currently just tired of action and plot but Gamin is the only thing that makes me want to keep going.
other people may prefer no filler so it's great for them but for me personally, I need those sweet filler moments as a reward for getting through all the drama and fighting.

Great Story
by superman89
February 14th, 2022, 11:22am
Rating: 7.0  / 10.0
This one balances out very well and one which you shouldn't mind how OP Gamin is at the start and so far throughout the story. Besides he does struggle with some and has to recall his teachings with his 'uncle' to overcome.

The other good part is how the author handles the other characters. They're fleshed out well but not too much that we need 20 chapters to do it. They help the MC out in areas he lacks which helps the story move along well.

The bad guys are written well and we also get some backstory with them and brief focuses on what's going on atm. No 30 or 40 chapters like other certain mangas like this one which makes you forget all about the MC and his friends, i.e Weak Hero but just the right amount.

Fun read and hope the author keeps on the same track as they've done from the start.

Edit. Had to lower my rating with this new arc. I despise tournament arcs in these type of plots. Sadly this author couldn't help themselves and put it in this time. Nonsense and takes away from the theme of the story. Hopefully this will be the last but it's dragging on and might have to lower the rating again.

Surprised at how much I like this!
by glowtoads
March 12th, 2021, 1:06pm
Rating: N/A
As a teacher, this is a pretty fun read! It's surprisingly high-octane action, and the sequences are nicely executed. There isn't much slowing down the pace of the story, and the characters end very well fleshed out, which is a delight considering the initial set-up of the story -- really, all we're signing up for is a high-school punch-out. But I think the core of the story remains the same even as the plot develops, and that's a mark of good story-telling for me. It doesn't feel like the author is branching too far, or going somewhere that was never intended (like a lot of webcomics and manga end up doing) so I'm still on board. So far, this is really good!

Action Packed Studying
by kurotaito
January 6th, 2021, 7:03am
Rating: 7.0  / 10.0
The story's premise is interesting. The lead goes to a gangster filled high school and his only goal is to study. And, he does almost anything for this goal from nunchuck fighting to bare fists against guns.

You read this for the action sequence & the interesting story. The comedy is not that funny, but the characters' backgrounds are various so that makes up for it.
Was this comment useful?  Yes