Login to add items to your list, keep track of your progress, and rate series!
Description
From Storm in Heaven:
Takatou Masaki is the second youngest of four sons, and seemingly a delinquent by nature. His hot temper has put a wedge between himself and his strict father, gotten him kicked out of one school, and tossed him at a school notoriously horrible for the one thing he's truly good at, basketball. A chance encounter with the willful Yuuki Kanako may serve as a catalyst for change, as the indefinable connection she feels with him draws them together. 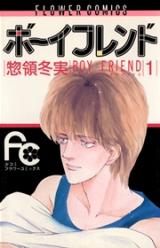 Nostalgic - Slow start, interesting characters, reminds you of MARS
by AresAres
July 19th, 2022, 3:47pm
Rating: 8.2  / 10.0
I was excited to read this because it's been on my list for 5+ years waiting for the scanlations to finish (Thank you scanlation teams!). I'm a big fan of Fuyumi Soryo and also MARS because of her artwork, storytelling style, and overall vibe with her stories. This story also made me pause several times and go back pages because I want to understand the situation and characters - what's happening and what they're thinking. I love how there are scenes with little dialogue and you fill in those spaces yourself.

I guess I felt a little disappointed that Kanako seems like a much weaker version of Kira Aso (from MARS) and seems to be a bit more flat in character. I wasn't sure what it was that drew her to Masaki in the first place. But I do appreciate their relationship. I like many of the characters in the series especially Sou and his relationship with Masaki. It's one of the better male-male relationship I totally respect.

This was such a nice read after having read MARS back in high school so I really enjoyed this as well. The art from the 1980s was such a throw-back (can you believe it's been 30+ years) and I enjoy this style a lot. It's also a glimpse of what life was like back in the 1980s in Japan (gosh there was so much smoking everywhere). It's a bit slow at first but does pick up a bit after so give this series a chance if you liked MARS, drama that's not over the top, high school romance that's not all cutesy, josei, beautiful artwork, and a pretty solid storyline.
Was this comment useful?  Yes

Fuyumi´s second best work to date
by residentgrigo
February 19th, 2015, 3:39am
Rating: 8.5  / 10.0
All of Fuyumi translated manga are various degrees of good and Mars which i also reviewed is the best shoujo manga in my book. ES (also a 9/10) comes third and it is a shame that this award-winning gem or it´s anime tv special haven´t been fully translated yet as i have read the whole manga and i can promise that the best is jet to come. The story could have gone on a bit longer but i am happy with what i have been given as it concluded on a satisfactory note. The art is less evolved then her later works but it is very good and calm nonetheless. The characterization is the highlight of the series as i always felt that I was reading about real teenagers for once and not about angsty genre cutout No.X. The very serious and dramatic aspects of the story never turns into a soap opera but what else is expected and i would have awarded this noticeably polished early work with a price too.
Why did it run in Sho-Comi btw. as that magazine is infamouse for smut and i hope that this tale get´s another chance to shine on the international stage in the future.

An intense and beautiful story.
by orebalgum
June 20th, 2013, 8:38am
Rating: N/A
I love the characters and the conflict and the feelings they convey, which can be seen in every scene. I have read up to the chapters translated, and is really worth the reading. It's a real pity that a so well done manga is not translated so we can all enjoy a good story.
Was this comment useful?  Yes

Pleasant
by bueyboo
February 13th, 2011, 9:55am
Rating: 10.0  / 10.0
I was enjoying this series until I realized that there was none left. I hope that this series does get picked up again since the beginning already shows so much potential. Also, the works by this author are always great.
Was this comment useful?  Yes

I wish this could be picked up again, and Fuyumi lovers could read another great manga
by conundrumy
November 30th, 2010, 1:48pm
Rating: N/A
I love this mangaka and her drawing style, also after reading Mars, I began to search some other mangas of Souryo Fuyumi, and then I said to myself: Yes! I've found another great manga like Mars, maybe better than Mars, because the same great art and basketball theme are in it. However, I'm so sad that I just can read until 5 chapters

why is it dropped

? It's really good. I wish someone picks this up again. I really wish.
Was this comment useful?  Yes

really good :)
by pryscillabq
December 3rd, 2009, 10:29am
Rating: N/A
i have to adimit i think that she is the best manga author that i know,mars is my fav manga of all,and ive read more than 400 mangas,and ive begun to read her others series,so i found boyfriend,and i must say,its an amazing manga,the art is really good,and the history is really captivating,i really liked it,and i hope for more ;O
if someone could translate the rest,it would be so good,im brazilian so i dont understand japanese,and the serie is really long,i really wish to read it all

Funny though, why expecting romance stright when the series starts?
It's even more real this way... Showing how everything evolves.
The art is not as clean as compared to her newer manga, but it's still good and solid.

Very nice !
by Jedai
July 30th, 2008, 8:39am
Rating: 10.0  / 10.0
After 4 chapters, this serie looks more and more like something that would suit my taste : drama but not in excess, stylish drawings, sport as a challenge, romance more or less "real-world like" (well not completely excessive and unbelievable like in so many shoujo).

I'll reserve my judgement but that could be a really good surprise.
Was this comment useful?  Yes