Login to add items to your list, keep track of your progress, and rate series!
Description
A strange phenomenon where one is transferred back to the moment right before something life-threatening occurs. This continues to happen until the cause of the threat is erased. It is as if somebody is forcing Satoru to stop it from happening. Then one day, everything is changed. What truths are revealed when Satoru comes face to face with his own past? How will they affect his future?

Note: Was nominated for the 18th Tezuka Osamu Cultural Prize Reader Award in 2014 and for the 7th, 8th and 9th Manga Taisho Awar... More...
A strange phenomenon where one is transferred back to the moment right before something life-threatening occurs. This continues to happen until the cause of the threat is erased. It is as if somebody is forcing Satoru to stop it from happening. Then one day, everything is changed. What truths are revealed when Satoru comes face to face with his own past? How will they affect his future? 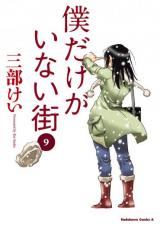 Story is quite short, but overall a very nice read for fans of crime and psychological manga
by zanderax
June 21st, 2022, 9:43am
Rating: 10.0  / 10.0
Erased is a very psychological manga where story moves forward mainly through characters' inner thought, thus is able to explore different emotions amid the tragic premise.and along its progress.
Time loop is used, without much explanation and could be considered a miracle to happen upon the protagonist, as a means for him to repair his past.

Spoiler (mouse over to view)
The story, in my point of view, could be longer to explore the aftermath, mainly the romance for our protagonist (because I'm a sucker for romance in manga) and how he moves on from everything, his later interaction with his friends, etc.

Character development is excellent. We all get to know the background and motives of almost all characters. Despite the supernatural aspect of time loop, our protagonist acts very realistically, first with his heart and slowly using more of his mind as he made mistakes along the way.

Apparently there is adaptation of this manga, in anime form and also live action. I will try to check them out and edit my comment here to rate them if possible.
Was this comment useful?  Yes

Culprit
by Efanity
November 28th, 2021, 12:30am
Rating: 9.0  / 10.0
Spoiler (mouse over to view)
My only complaint is it was obviously the teacher. Sure I thought maybe I am wrong but when I reached the moment where the murder was reveiled my first thought was "knew it!" Although other than that everything else was pretty much AMAZING and the ending is pretty great with everything being tied up nicely.
Was this comment useful?  Yes

Perfect
by YuriTachikawa
August 26th, 2020, 11:06am
Rating: 10.0  / 10.0
EVERYTHING was perfect. Characters, story, progression, art, pacing and the ending. It balances the tension pretty well and the thought process of children in situations like these are very realistic. I have to agree with the other comments though, this has not much action, drama or mystery, so don't go reading expecting that and it will be an enjoyable read.
Was this comment useful?  Yes

Good Manga
by conan557
December 17th, 2018, 9:00pm
Rating: 10.0  / 10.0
I can't believe that what prevented me from reading this manga was the previous comments here and on the myanimelist anime adaption. Those comments degraded this masterpiece and made me not want to read it. This series is a good one that is surprisingly heartwarming in a way. And if there is one lesson that I learn, If a series is on top and has bad reviews, read it anyway.

Solid work.
by firewolf19
January 3rd, 2018, 12:30pm
Rating: N/A
This was a really interesting read. The first half of it was fascinating and I was totally enthralled in the story and crossing my fingers that the hero would succeed in his race against the clock to save his friends from the "inevitable". I do wish that the culprit behind everything was a little less obvious though. The portion of the story that takes place after the "accident" and last major time skip felt a little lackluster to me. I guess I just didn't feel the ominous threat that I felt when they were all children. I suppose it felt rather anticlimactic compared to the suspense of the first half of the series. Also, I was definitely not a fan of the art style.

BUT. All that being said, I still find it highly memorable and fun to read, hence the high score. I was totally immersed while I was reading, despite little issues here and there. The only reason I'm not rating as a 10 is for the ending, which I believe could have been better. Definitely pick this one up though!
Was this comment useful?  Yes

Perhaps the best manga yet made
by Discriminating Dom
May 24th, 2017, 1:14pm
Rating: N/A
Mystery, drama, humor, heart. A beautiful and complex tale that can only be written by an author of intelligence who believes in his work, with masterful illustration and direction that really shows off the power of manga as a visual medium. From start to finish, the reader can feel that the story was planned and refined. The plot's construction and presentation make it eminently re-readable, and the second pass shows how much work was put into the details of foreshadowing. There are a thousand things to gush about, but to list just a few aspects of what the author managed to pull off...

Writing about a writer without a drop of fan-service or self-pity.
Time travel that services characters and story, and not the other way around.
Children that are written as children, and not micro-adults.
Mature, earned, filial love.

How many of the innumerable hacks who get anime adaptations would fall flat on their faces trying to pull off even one of these in a serious manga? How much time and effort goes into derivative garbage manga when works like this exist?

The story overall remains good, though not amazing. In particular, it's somewhat marred by a) the action part of the ending feeling rather weak to me, and b) the timeskip ability never receiving an explanation or justification.
Was this comment useful?  Yes

thrilling, exciting and emotional
by red-eyed-slayer
July 12th, 2016, 3:12am
Rating: 7.0  / 10.0
Normally when I see thrillers, i tend to think they just loop around the story with no character development or strong plot progression such as Monster, but boku dake ga inai machi used the theme of friendship in not so melodramatic style but to combine the thrilling elements of the series with strong contrast of that element to give a powerful sense of hope and emotion.

A must recommend series that only last 8 volumes and has beautiful and good amount of character development that succeeds not only due to the character backstory but the character interaction with well written dialogue that doesn't feel awkward. Very worthy of its praise

PROS
- likable main character
- the characters were not bad.
- the story plot was interesting

CONS
- kind of predictable.
Spoiler (mouse over to view)
Almost everyone could tell it was the teacher I mean it was just too obvious! Either they showed him too much which made us suspect him or maybe he was just too nice to the main character.
- got a bit boring towards the end

It was pretty good but if you love mystery genre, you might not enjoy this because it's kind of predictable....