Login to add items to your list, keep track of your progress, and rate series!
Description
From Fushichou:

Hikari is a quiet, shy boy who secretly admires his senpai, Kizaki. Or, are Hikari's feelings deeper than he has admitted to himself? It also appears that Hikari has caught the eye of one of his teachers. What will become of Hikari?

SideStory in v02 is not scanlated 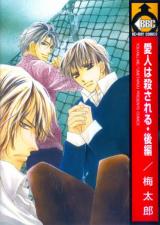 Nothing special
by mashimaro12345
August 4th, 2012, 7:05am
Rating: 5.0  / 10.0
Guy falls in love with a senior, teacher seduced him instead, guy falls in love with teacher, teacher loves guy. The art is not like the cover page at all. Characters are not really beautiful, with only some exceptional scenes. The senior looks like some gangster, while I still can't understand the teacher's way of expressing his love. Main character is mentally unstable, and he irritates me most of the time.
I initially thought the senior would end up with the main character, but then it seemed as if the author suddenly changed his mind after volume 1 and made him choose the teacher instead.
It's a little bit funny, as it's as if the main character chose the teacher as he slept with him.
Was this comment useful?  Yes

natsukashii
by sacchan
January 17th, 2012, 5:43am
Rating: 9.0  / 10.0
this is 'old style' manga. when mangas used to be more emotion-based. compared to now a days when mangas are about the plot and storyline and how intresting you can make things happen and stray off from the 'unoriginal'. it does not completely make sense nor is it perfectly organized for the readers to follow. but it actually has emotion and depth and more raw feelings.

reading it reminded me of back in the day when mangas used to have whimsical-ness to it and everything didnt have to make sense and no character had to be hated or be called stupid for making the 'wrong' decision or not seeing how things 'should be'. and ive miss it so much. This really is what mangas used to be about.

if you're a newbie or someone from the recent years and are looking for something eventful to intrige or entertain your mind, then you probably wont like this. if your someone that thinks you've been around manga long enough to be on a high horse and critisize everything, then you most definetely wont like this. but if your someone thats open minded and wants to read something that has beautiful raw emotiongs, good pacing, more depth and a plot that cant be predicted, then it is something to give a chance to. its definetely not perfect but at least it makes you feel something.

strange manga
by rumflakes
April 19th, 2011, 7:22pm
Rating: N/A
i really disliked the ending and twist. imo hikaru ended up with the wrong person...i kind of saw it as an unhappy ending
Spoiler (highlight to view)
hikaru should have ended up with senpai. i dont get the reason in his change in love. because they had sex? this confuzzles me...the sensei is a creepy stalker, hes evil and extremely manipulative
i dont think the story was well thought out, felt like the mangaka made up the story along the way
the artwork wasn't all that great either, but i think the faces are well drawn to match the emotions
Was this comment useful?  Yes

excellent
by pleochroic
January 13th, 2011, 7:40pm
Rating: 8.0  / 10.0
finally a story with some depth. nice foreshadowing of the ending too; subtle and yet powerful if one notices it when umetarou does it. not typical of BL in that the setup as perceived originally is not how it ends up. this is a definite keeper for me, even though i am not terribly fond of the art -- actually the composition is often very good, just the drawing of the people isn't quite up to par.

I think this is one of the best yaoi manga I read it, I'm glad that Hikaru picked...uh, I'll leave it at that.

I really love the ending~!
Beautiful storyline
Nice twist
And nice art, well for me...it may not suit some people's taste, but I obviously loved it.
Was this comment useful?  Yes

didn't like it AT ALL
by milka-gemma
July 21st, 2009, 3:20pm
Rating: N/A
about newborn baby: "how disgusting. that is a result of a man and a woman having sex. out of the darkness the bundle is born smelling like blod" (cited from scanlation) WTF?? where did YOU come from??

Aijin wa korosareru
by bromide
August 18th, 2008, 6:55pm
Rating: N/A
One of the things that got me about this manga was the main character Hikari's expressions. They were fantastic. Umetarou's ability to display devastation is admirably good. Hikari is by far the most likable character in the manga, and I found the ending to be particularly disappointing because of that, akin to what everyone else has said. If the ending were better, I would have given it a 10, but as it is just sort of... ended, I give it a 9. A sequel would be nice, something set perhaps 10 years into the future.
Was this comment useful?  Yes

One of the best
by Ameonna
May 18th, 2008, 10:46pm
Rating: 10.0  / 10.0
seriously, this is one of the best stories that I have read. the art was very beautiful with my taste and the story was so alive and interesting that was making my heart throbbing. once in a while you may come across such a good story which has some style and real soul in it, I dont know about others but I am so happy that I had a chance to read it. I will check other works of this manga ka out for sure.

Aijin wa Korosareru
by archer_type
April 8th, 2008, 10:03am
Rating: 9.0  / 10.0
The drawing's mediocre but the story is very heartrending. I can understand why some readers don't like the ending. It seemed as though Hikari's bound to a sad, and lonely relationship of unrequited love. But personally, I think it's the perfect ending. I believe the whole point of the conclusion was not his relationship with the sensei but ultimately his recovery of inner strength by being able to love and fight for that love. Hikari's life is pretty tragic, coming from a broken family and feeling rejected all along. His brave decision to be honest and face his feelings for the one he loved is what ultimately saved him. I love the story.... Hey, but that's just me. Peace!

agreed
by blueseeker
January 31st, 2008, 6:34pm
Rating: 7.0  / 10.0
I liked the art and the story but like angelkurisutin i could not deal with the ending. The mangaka makes you get involve and like the semi-set couple and then from nowhere makes it totally irrelevant. So other than the ending i really enjoyed it.
Was this comment useful?  Yes