Login to add items to your list, keep track of your progress, and rate series!
Description
Ayano, Tsubasa and Ichinose, Yuu are childhood friends. Since they were kids, they were inseparable. But one day they have to part each other's way because both of them are transferring homes. Clueless of where they will transfer, they were shocked when they see each other going to the same school from the place they transferred in. 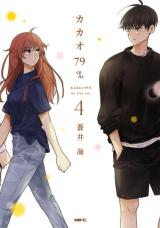 
Category Recommendations
Princess to the Rescue!
Sweet Bitter Love (ChuChu)
The Warmth of Your Heartbeat
Strawberry and Milk Tea
My Last Love Scenario

Slow but worth it
by brandito
May 27th, 2021, 4:53pm
Rating: 10.0  / 10.0
Yeah it takes its time but it never feels like it's wasting your time. TBH I would've hated reading this if I wasn't able to binge the first 150 chapters, but I love the main characters so much that it's fun seeing as much of them as possible. Also it's funny as hell and very self aware of how long its characters are taking to the point that some of the misunderstandings get so absurd they become comedic.
Spoiler (mouse over to view)
I loved the scene where Ayano is questioning her feelings for Ichinose, and Tendou, channeling all the hopes and frustrations of the audience, just angrily punches her in the face because OBVOUSLY she's in love with him and everybody except her knows it. It's stuff like this that makes you think "Oh yeah this story knows exactly what it's doing"
Ayano and Ichinose have such a natural and sweet chemistry that even watching them bullheadedly work out their emotions is fun just because of how genuine their friendship feels. Looking forward to seeing their relationship develop even further. Only problem is the flashback arcs tend to drag and the art starts out pretty ugly.
Was this comment useful?  Yes

Casual Misogyny and Homophobia
by anarchistcandy
February 7th, 2021, 8:00pm
Rating: N/A
Within the first dozen or so chapters it becomes apparent that this is going to be your typical high school heterosexual romance. That's fine. There's also a lot of gay panic at the idea of boys liking each other with comments like "how could you say something so wrong/disgusting about me!" (Jesus). There's commentary about how unfair it is about the main girl being charismatic and a tomboy and how her being friendly with boys is a part of her being coy and a sexual deviant -_-. There is also the typical trope about how girls are responsible for their own sexual harassment and should never allow themselves to relax in public or with male friends or relatives because men are beasts who can't control themselves around women they've known their whole lives. This casual sexism and homophobia is shoved in your face repeatedly to the point I am honestly really sick of it.

I think the main reason it's harder to swallow in this story is because the main characters are childhood friends who are a boy and a girl who are dealing with toxic gender roles as the main reason they deny their feelings for each other. If you can handle how sad it is but also utterly revolting, maybe you'll power through this.
Was this comment useful?  Yes

So goddamn slow but the expressions man
by kira6
October 2nd, 2019, 9:20pm
Rating: N/A
So goddamn slow but the facial expressions and expressions of affections were oh so worth it. We know it, they know it, their families know it, their classmates know it, but the main couple bless their Japanese "I don't wanna be a burden" and "It can't be helped" hearts. If you wanna know when they truly and finally get together:
Spoiler (mouse over to view)
150+ chapters in. Strap in cuz you're in for the long haul on a track that goes around in circles istg. They confess and kiss multiple times, but either the main guy or girl (or both!) would be a dimwit and misunderstand the other person. And rightly so but still so frustrating.
But would I reread it? Hell yeah, I'm a sucker for slow romances involving childhood friends. It's my weakness, and this one was hella cute. But warning: goddamn slow and hella frustrating sometimes. Also I'm not a big fan of some of the side characters and side stories like Ai-chan. Ai-chan's arc shoulda been short and finished with a hella long time ago. In the middle of a side story right now, and I can't wait until it returns to the main couple. Frustrations aside the main couple really grew on me.
Was this comment useful?  Yes

Super Duper Slow
by jeffreymgibson
July 26th, 2019, 2:02pm
Rating: N/A
I read a top 10 list that recommended this so I gave it a look. I don't mind shy characters, but eventually you have to get the courage to express your feelings to the other person or the Manga will turn stale. These are suppose to be high school kids, but they act like kindergartners when it comes to love. Then you thrown in a roadblock every time you think something comes close to happening and your back at chapter 1. One thing I hate about these web-comics is that they can go on forever.
Was this comment useful?  Yes

slow and steady, but wonderful
by xdeLiiRiOus
September 11th, 2018, 8:53am
Rating: 10.0  / 10.0
I am writing this review based on 135 chapters and from what I've read so far, this is definitely worth a read. I love this webtoon so much as it spends a lot of time on creating a wonderful cast of multi-faceted characters. Each character has his/her own motivation for their actions, and 'antagonists' aren't really antagonists. The webtoon spends a lot of time explaining the intentions of the characters so the dialogue, action and events flow more fluidly. It feels realistic, and you can't help but be drawn into the world that Aoi Umi has created.

although it is painfully slow in the beginning, it definitely picks up and improve as the characters become more aware and understanding of their own feelings.

Repitive
by agartha
April 15th, 2018, 6:43pm
Rating: 8.0  / 10.0
One of the biggest themes in this manga is the sense of not being a burden. It's kind of a thing Japanese are a bit known for; doing things more for the greater good and not for self-interest. A lot of the characters suffer from over doing this. I wouldn't say the manga is tackling this issue, but it is a big driving force behind the plot and way it is progressing at an annoyingly slow speed.

Other than that annoying bit the story is typical but cute, flashbacks are appropriate, the facial expressions... holy shit 200/10 just great always add a nice comedic break to the seriousness. The art does seem more Korean webtoon like to me so sometimes I accidentally read left to right but it's still really nicely done.

Refreshing!
by nela_36
July 18th, 2017, 1:54pm
Rating: 8.0  / 10.0
Even though this manga doesn't offer so many new elements, the way in which they are presented is really a unique one. Characters are the selling point of this manga in a way that MC, even though they are a bit slow, since the beginning have strong bond and deeply care for each other. In a high school setting we are reading how they slowly convert from best friends to lovers and it is done in an excellent way! But the basis for their love relationship is set in their middle school and through flashbacks we can see how they have changed and how their feelings are starting to change. Another thing that i must commend is humor. You will literally laugh out loud in many scenes and even their facials expressions are done in a way you can not stop yourself from giggling. To summarize, i recommend this manga to anyone who appreciates non cheezy romance and great sense of humor.

Great read so far!
by Gialeigh
April 21st, 2017, 12:02pm
Rating: 9.0  / 10.0
This is definitely a gem among the many webtoons/manga (different manga websites have referred this series to both). I am at chapter 45 right now and the series is still ongoing, so I will be stating my opinion based on what I've read so far.

The plot may not be very original, however, the way the story is presented is refreshing, interesting, and joyful to read. Character development is definitely there with the compliment of flashbacks to give a better sense of the characters' background compared to where they stand currently. I love the chemistry so far between the two main characters, where they both have their own problems, but work together in a sense, to get to a common ground.

Furthermore, serious scenes can turn into humorous scenes. This can really be be made possible through the characters' development and personalities. Aoi Umi also does a fantastic job with laying out appropriate outcomes to each encounter the characters have and giving the reader different perspectives to one situation. She does an excellent job drawing the character's facial expression... very funny. I was trying to search for the series on myanimelist, but they haven't given the series the attention it deserves... rather sad - props to baka-updates! -.The series is very enjoyable and I highly recommend one give this a try. I, myself, is looking forward to the upcoming chapters because it's only getting more interesting.

So glad!!!
by Himeowchama
February 19th, 2017, 5:01am
Rating: 10.0  / 10.0
This is probably one of the mangas that I was reallyyyy proud of reading before this was a hit!!! It started with a rank of around 2800+ in a certain manga site, and around 4 chaps were released by then. It clearly had potential I was hoping for, and it did not disappoint me so far!!! This is a must read. I'll give this a 10 for now (will update the score once the manga is done~
Was this comment useful?  Yes