Login to add items to your list, keep track of your progress, and rate series!
Description
Imagine a country where couples are chosen based on the compatibility of their genes. Whenever a resident reaches the age of 14, a partner will be suggested to him or her based on which match would result in the best child being born.

This is a collection of stories about some of the more "interesting" pairings chosen by this system. 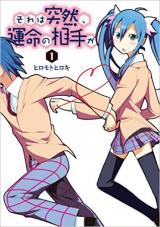 Note: You must be logged in to update information on this page.
Forum Posts Click to view the forum
Table of Contents
over 10 years ago

Eugenics Rom-Com!
by cullford
July 12th, 2018, 3:10pm
Rating: N/A
For context, I only read the oneshot. I may read the rest some other time and revise my opinion.

The setting, wherein eugenics is proselytized by the State to its citizenry and its implications (genetic-based reproduction) are highly encouraged, to the point where society will both financially support our mains as they are such an ideal match, is reminiscent of other works classified as dystopian and usually cast in a negative light. This is especially so in the West where eugenics is primarily associated with Nazism and other nationalist movements.

The focus of this manga, however, is not truly that setting, rather the setting is a vehicle for the romantic plotline. Which, by its own merits, while not anything to write home about, was still enjoyable. However, the implication of setting a light-hearted romcom story in this setting, and using the eugenics system as a vehicle for romance, says much. I can see two potential interpretations. One, the idealization of genes as a end for romantic relationships. Yuuichi and Manami are seen using their ideal genetic compatibility as a means to justify their romantic relationship. Even if it is assumed that they do have in addition romantic compatibility, the conclusion is still that there is an overarching idea that achieving a genetic ideal in society is the ultimate end of their romantic relationship, that is, at least in part, how they get past their sibling relationship. While I am not going to comment on whether this is good socially or personally (this is hardly the place and I am hardly qualified), it is interesting to keep in mind that (while not as extensively adopted or pressed as in Nazi Germany) in Imperial Japan between before the end of World War II, efforts (legally and through propaganda) were made to limit the reproduction of those deemed genetically inferior while promoting reproduction of those deemed superior. Although there does not seem to be any direct ethnic ties to the form of genetic superiority promoted in this manga, the link still remains ominous.

Secondly, there is something this says about the manner in which a partner is chosen. Everyone is given a selected partner from the state, which they can refuse out of a sense of faux freedom-of-choice, in the same way in which any modern social norms can be freely disregarded, only after overcoming their internal predilection from their upbringing the with potentially heavy repercussions from their peers (even their father pressured them into accepting the State's recommendation). It is, of course, necessary to give this choice in order to avoid the full sense of a totalitarian regime. Yet the characters here are lured into a case of proxy Stockholm syndrome (the state pressures one into a romantic relationship from which a more authentic romantic interest is generated), which while not directly authoritative in law, seems to be authoritative in thought. The romcom veneer through which these stories are presented is further evidence of that, the sense of security through one expects from reading something lighthearted and fun parallels the sense of security and ease that the characters receive from following the system's societal norms (agreeing to the partner recommendation).

I will not say that my claims were necessarily considered by the author before writing, in fact I doubt it. It is interesting to me from the perspective of an insight into the modern Japanese mindset towards eugenics and the potential remnant ideologies present in modern Japan from the Showa period.

Cringeworthy. So. Cringey.
by plaiin
November 1st, 2016, 9:51pm
Rating: 5.0  / 10.0
Maybe I expected too much but the entire premise and the interesting part of the series wasn't utilized very well. The artist could've used the matchmaking gene element in a lot of interesting ways, but ended up just using it as a convenient way to get couples together fast. They were all pretty bland too, or maybe since I'm not a big fan of tasteless and nonsensical ecchi, I didn't like reading this at all. I actually skimmed through the chapters since it was a chore to read. If you like very simplistic, unrealistic, and cliche couples go ahead and read this. Or you could check out Tsurezure Children which also has multiple protagonists and couples but has much much better storytelling.
Oh, also the author's a fan of incest as two pairings out of four (I think?) were incestual pairings.

Would like to see more from this mangaka
by Matic3d
July 9th, 2014, 9:52am
Rating: 9.0  / 10.0
Lovely artwork and a unique romantic premise well told. I would love to see more from this author. For a debut short series this is impressive and I'm surprised that it hasn't gotten the attention it deserves. This mangaka should be given opportunities to do more. I'm surprised its considered shounen however, the story is really within the shoujo genre despite the artwork style being more rounded.

About one-shot and the rest
by sighing
May 2nd, 2013, 9:58am
Rating: 9.0  / 10.0
don't stop because chap 1 isn't as good as chap 0. there are actually a lot of different stories. the first two are too sweet for people with diabetes, be wary. And the rest is deeper( just a little ) and frankly very cute. it keeps getting better. sad it ended in 4 volumes
Was this comment useful?  Yes

It would have been interesting to develop the characters (Jun and Mai) prior to the matching - have a scene where they discover each other during the matching - and show a slow progression of acceptance.

Instead we have a really erratic pace where everything just falls into place clumsily for the sake of completing the story/arc.

Toothache-level sweetness
by penguin71
January 7th, 2012, 11:30pm
Rating: 8.0  / 10.0
The oneshot, as stated by those below, is pretty good, but it's not something to write home about. I don't understand why the others glorify it, because the story isn't significantly better than the rest of the manga. Although the rest of the chapters are about an entirely new couple, I find it quite interesting as the relationship progression isn't as predictable as one might expect. The comedy is well-placed and in general it seems like the beginning of a heartwarming romance for multiple couples. Don't expect any overarching messages or extended angst periods.

I definitely would give it a go if you are even remotely interested in shounen romcoms. Expect lots of blushing and innocence.

agree with the others
by demonofchaos
November 20th, 2011, 9:52pm
Rating: N/A
i really like chapter 0 after reading it was was ready to add this series to my reading list but chapter 1 its a different story.chapter 1 its not as interesting as chapter 0 which is much better.
Was this comment useful?  Yes

One shot
by SRASinister
October 23rd, 2011, 1:54am
Rating: N/A
In my personal opinion, I think that the one shot is much better than the actual story. I was waiting for the manga to pick up where the one shot left off, but it did not and instead created a new boring one. I just could not get into the actual story at all. The one shot is like a 9 and the manga is a 6. It was really just kind of there.

Basically, chapter 0 is about
Spoiler (mouse over to view)
Yuuichi Sadagana and how he lives in a country where marriage is voluntary, however it is strongly advised to accept a fixed partner that the government selects for you and that you are introduced to at 14 years old (partner selected for the sake of "the best genetic match-up", as to have the most capable offspring possible), the story mainly has him dealing with the pressure of accepting or rejecting his partner who is someone that he really, really didn't expected to meet in there in the least. Basically is a story about the weight of "true love" with a pretty obvious strange quirk (which is spoiled by the chapter title) and a situation where the views of society aren't 100% the same as ours

After chapter 0, the rest of the chapters are about Jun Kamiya and Mai Maeda. Personally I found more interesting chapter 0 than the other story, also chapter 0 is not conclusive per se, so perhaps more chapters about that stories are going to be written by the author in the future or something.

Comment
by fengde
August 9th, 2011, 3:40am
Rating: 10.0  / 10.0
Awesome artwork.
This manga contains many short stories. The characters are well designed and the story alway have a heartwarming content.

In conclusion, its a must read manga for teens.
Was this comment useful?  Yes