Login to add items to your list, keep track of your progress, and rate series!
Description
Atsushi Ando (15) moves back to his home town with his family after 6 years. The story focuses on the fortunes and misfortunes he encounters in this town mostly due to pranks pulled by the ghost of his older brother, Hitsushi Ando, AKA Q-Chan, whose death prompted the family to move away in the first place.

The catch is, only Atsushi can see his brother's ghost. 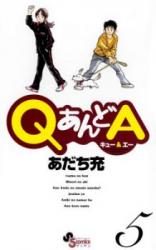 Note: You must be logged in to update information on this page.
Forum Posts Click to view the forum
Chapter 34: The ending (spoilers)
over 9 years ago

A decent but rather forgettable Adachi series.
by PZcolo
October 20th, 2015, 7:22am
Rating: 6.0  / 10.0
Don't like the relation of the brothers, what's the big idea? Ando can't choose what he does, what club he joins, what girl he likes, etc. it's all chosen forcibly by his brother. And what's the big deal with the brother, someone that died 6 years ago at the age of 12, why would people remember him that much and so much time after his death keep calling Ando "Q's little brother"? if anything they wouldn't mention his dead brother to avoid causing him painful memories... Oh and 12 years old... How come he's just a depraved ghost? Talking about precocious.
The later part of the series is definitely better, more plot and relation development and you don't get the dumb ghost bro messing everything as much. As for the ending... Well some will like it some won't, I just don't like those endings in general (don't want to spoil anything).
Other than that, it's pretty much like any other Adachi series won't see anything really new in both story and characters, so, I'd pick almost any other Adachi series instead, with the exception of "slow step" and "Nijiiro Togarashi". Also, pretty much agree with MondSemmel, would have been better of being shorter.

What is this?
by MondSemmel
January 31st, 2013, 6:19pm
Rating: 6.0  / 10.0
Q and A is a story with a few good parts, but Adachi's attempts of breaking the 4th wall constantly overshoot their goal by far. Most charaters are underdeveloped and serve no purpose whatsoever. Most chapters seem like 99% filler. In fact, you could probably skip 4 volumes of the manga without missing anything in the plot.
The ending on its own is really decent. Yet it's so far removed from the rest of the story that I can't help but think this could have been an excellent 1 volume manga, but it's a lousy and nonsensical 6 volume manga.
Was this comment useful?  Yes

Not the best one, but decent ending.
by Decel
October 8th, 2012, 10:49am
Rating: 7.0  / 10.0
Not Adachi's best work. The ending especially felt a bit awkward by its surprising twist, but overall it's one of the better ending that, while being open, brings some form of closure to the story.

A big thank you to all the groups, especially to imangascans, for sharing the work!

Wow
by AndyProk
October 8th, 2012, 10:12am
Rating: 8.9  / 10.0
This is the first manga where I'm not rooting for what I expect to be the pairing the author is going for. I'm actually rooting for Shinobu-chan, while I bet Adachi-sensei will let Atsushi end up with Yuho, since Shinobu was introduced so late.
Edit: Well, having finished it now, he sure did a genius job of changing my opinion. Among other things by simply not having Shinobu appear for quite some time after that island arc. In any case there's a sweet feeling left behind after reading this story. However, since my grading starts at 5 and then goes up or down, instead of starting at 10 and then substracting, it'll have to be satisfied with an 8.9
As for the ending, while it was surprising, I actually liked it after mulling about it a bit.

Adachi Mitsuru
by Lightning Hiro
September 22nd, 2012, 10:57pm
Rating: N/A
It seems everyone likes to talk about the author more than the manga ^ ^

Manga is eh, I'm up to 5 volumes, the progress is really slow, but at least it's getting somewhere. Cross Game kept it too open for my taste ( -.-) Anyway, Q and A, I at first anticipated this series with great expectations!! But, it's pretty...I don't know. I just can't believe 6 volumes and it's done. Or at least NOTHING HAPPENED. I would much appreciate if Yuuho and Acchan get together, it'll redeem itself and Cross Game!! Since this relationship basically is the same as Koh and Aoba's haha.

I'm a hard core fan of Adachi. I reread Katsu, Touch, Rough and H2 this summer (so I'm not some Adachi Newb who only knows Cross Game). Been a fan for 4 or 5 years, read his older works like Nine and Miyuki too. I like his work, I like his unique style, and he's probably the only mangaka I would read from the 70s or 80s.

And let's face it, Adachi is getting old. He isn't is in his 20s anymore, he isn't going to grow like the rookies of SJ. And it's even harder for him to relate to this generation as well. But Adachi has a solid fan base, I don't see anymore great works like Touch in his future, but I would like to enjoy just reading some more, I also love his main characters. They aren't stupid, they ALWAYS THINK. It's different

Haha, rereading his works from the 90s, they scarcely had cell phones, so they always missed each other, haha, you're not going to see those situations in this time.
Was this comment useful?  Yes

Amazing
by emkat
August 17th, 2012, 10:58am
Rating: N/A
Adachi is a great mangaka. People here have ratings from 2009 - they didn't read the full series, so pay no mind to what they say. This is a great example of Adachi's work with humor mixed in. You have a boy who deals with living in his older brother's shadow while dealing with relationships and sports. It's a fine manga, and the character development is excellent.
Was this comment useful?  Yes

Super duper boring
by Lucifel
January 4th, 2012, 2:04am
Rating: N/A
I have a marginal amount of patience with Adachi. Here is an author whose style hasn't progressed in decades and who keeps rehashing the same plot elements over and over. His smugly self referential 4th wall breaking and his literally advertising within his own manga for previous or other current works just makes me angry.

I have to wonder what kind of world he lives in where everyone who has ever had a family member or loved one die becomes Superman. This time the dead character actually hangs around instead of just being a photo everyone stares at when they need to be emotional and quite frankly I think I prefer the old formula. At least then the person was putting in the hard work to become Superman rather than having their dead brother possess them.

In short, it's yet another Adachi manga but with the fanservice ramped up more than I think he's ever done before. If you've ever read anything he's done you have read everything he ever will do. Readers beware.
Was this comment useful?  Yes

Another sport huh?
by blackmokona
May 10th, 2011, 9:42am
Rating: 9.0  / 10.0
Pacing? No, his pacing is the same as ever. And since the characterization is somewhat borrowed, the ghost trope familiar, I'm finding myself very comfortable reading this series. Unlike Cross Game, which slaps all of his twists together in an unlikeable, hurried fashion, Q&A takes 'slice-of-life' literally (minus the ghost) and spends indulgent time introducing characters, as well as working to establish behavior. There is a vague promise of a plot, and it's ADACHI, so it'd be silly to worry.

smh
by grahf
May 6th, 2011, 2:27pm
Rating: N/A
Towards the end of Cross Game i realized that Adachi can only do what he has done before. His pacing is the same, his jokes are the same if anything he has improved and cleaned up his drawings. I honestly believe Adachi's best works are his early ones, this sadly isn't one of them. Actually its not even Katsu (which is the last work he did that I liked).
Was this comment useful?  Yes

Despite being monthly the pace is just horribly slow, making so bloody hard to follow because each chapters looks like nothing happens and the character development remains just a dream.

Jokes are repetitive and not fun. The ghost brother was cute at first but when his pranks started to be repetitive he became very annoying.

If you are a newbie better just stick with Cross Game and forget about this, as this one is only for a hardcore Adachi's fans who have crazy amount of patience.