Login to add items to your list, keep track of your progress, and rate series!
Description
Ryuuhei promised his father to protect Nao even though Nao is almost ten years older. Nao is almost thirty now and wants space. Can Ryuuhei really give Nao space? 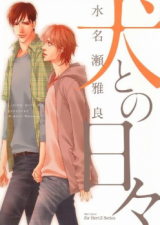 miss average
by noelle777
August 23rd, 2014, 7:38pm
Rating: 6.0  / 10.0
I like this mangaka works. It wasn't the worst but also not the best. It's her mediocrity. Seme's way of thinking at the beginning seemed to be shallow but it was explained properly later... But adult man who has to be protected by ten years younger guy - because he isn't capable to take care of himself...? Seriously?
Was this comment useful?  Yes

Hmmmm..
by Kinky-Chan
December 7th, 2013, 7:08am
Rating: 7.0  / 10.0
The story is pretty average, very normal and nothing fascinating about it. However, there's one thing that bugs me a lot. Who on earth is that stalker? We can clearly see that he's not just some random stalker, I mean he's all dressed up in a suit, looking like a salaryman and all...I thought stalkers in manga usually have a shabby look? == Lol.

Well other than that, I think the whole storyline is quite boring. I don't feel the thrill at all when I read this... :/
Was this comment useful?  Yes

The author had surely build her loyal fanbase and she came up with a few likeable pieces of work, yet there is still room for improvement. This time it's again like that. The drawing style is simple, but that doesn't mean it's not in it's own way interesting. It's rather the storyline, that starts off with potential and then just misses the right feeling. The conclusion was not really catchy and had a blunt taste to it, because ...

Spoiler (mouse over to view)
At first the atmosphere is tense, since there is this unclear relationship between Nao and the father of Ryuuhei. Then their feelings turn out to be mutual and Ryuuhei realizes, that he had a misunderstanding, since Nao wasn't with his dad but his uncle - Of whose existence Ryuuhei never heard a single word from his father? Or, Nao, after they lived together for several years? And, why add some drama at the end and let Nao run away, because he doesn't trust Ryuuhei, which on the other hand doesn't trusts Nao's confession? That's strange and IMO let their feelings become just too weak, sorry.

However, it's an average read and if you can overlook a few weak points, you might come to like it in it's own way. At least the beginning can be interesting & get you to give it a try.

So so
by mtmt1311
March 17th, 2013, 3:54pm
Rating: 6.0  / 10.0
Typical devoting seme has unrequited love for a dense uke. The uke gives me a vibe of a weak and not so manly guy (most of her uke are like that but this one is the worst). I dont get how a grown man always need a boy to protect him all the time. And his love is kinda wishy-washy, the seme wants sex, he was like OK but never properly discuss it. Im surprised how he completed ignored the fact they just had sex and his past to the seme, even though its important to explain it.
Was this comment useful?  Yes

a new one
by Amitielle
September 17th, 2011, 12:26pm
Rating: N/A
Again, she's starting a new one without finishing the older projects. I can't really understand sensei.

Regarding the plot, it's more interesting than all the manga she had released recently but again it has that feeling: an "impossible" love based on "not blood related siblings/father-uncle-child" thing. And even if it's better than the previous ones, it's predictable...unless she has some brilliant idea and the story will have a very powerful twist at the end (if it's have one).

The graphics improved somehow and it's like she draw more details.

Sorry if I offended her fans, it's just my opinion and I don't want to be misunderstood. I really like her work and I appreciate her effort, but recently it seems that she has some writer's block or she just become greedier and wants to have more projects at the same time.

Well, I hope she will finish this one, though. So, 先生, 頑張ってお願いしま す！
Was this comment useful?  Yes